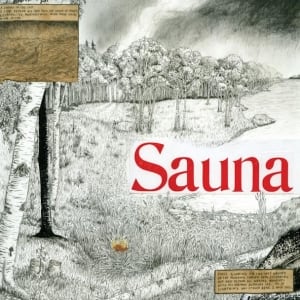 Washington’s Phil Elverum possesses that intestinal drive that so many of us wish we had come 3 p.m. at the office job or 3 a.m. when still looking to put the final touches on some impossible-to-grasp hook. When not writing, recording and performing under his avant-folk alias Mount Eerie, Elverum keeps busy with other artistic endeavors like penning dark comic books, capturing eerie landscapes and honing his dark metal skills. Akin to the late Mark Linkous (better known as the leader of Sparklehorse), every fiber of Elverum is intertwined with these artistic endeavors and genre-bending collaborations. These often-tortured productions were never truly meant for mass consumption; they are merely the language of the artists behind the fractured framework.

Elverum’s newest Mount Eerie offering Sauna, released through his own P.W. Elverum & Sun imprint, maintains his fondness for depressed atmospherics and frail duets — a suitable pairing for the long, brisk evenings of February. When so many other creators are pained by the creative process, the work seemingly flows effortlessly from Elverum and company across the double-LPs twelve tracks. For Elverum doesn’t wish to portray some altered or heightened version of himself, Mount Eerie is a transparent glance into his current location of this vastly uncharted roadmap of existence. “I don’t think the world still exists/ Only this room in the snow, and the light from the coals,” dismays Elverum during the opening moments of the ten-minute opening/title track. And the underlying noise is equally as jarring — the sounds of a massive ship slowly vanishing into the distance. This notion of a fleeting existence runs through the album, “As long as I am drawing breath, the world still exists/But when I die, everything will vanish” remarks Elverum as the distorted drumroll of “Planets” sets in.

For Elverum, neither existence nor happiness is any more permanent than the clouds of warmth created by the sizzling volcanic rocks within the intimate confines of a sauna. That also means each moment is worth remembering, be that finding a cracked open pumpkin soaking in the chill of a brook or merely walking to the local bookstore in the rain (“Pumpkin”). And it is those moments of reflection that often lead to the most constructive daydreams:“So I make coffee while looking out the window/ And notice that I can’t remember when or if I woke up” (“Sauna”). It is that appreciation for “now” which has undoubtedly contributed to Elverum’s feverish release schedule. Even when retreating to the solitude of a recording studio, Elverum understands he is still only a few characters away from communicating with followers across the globe. It is a note over two years in the making, but Sauna is personal, filter-free message for anyone that can lend an ear.

Absent the lyricism, Sauna is still affecting. Elverum doesn’t stop at just conveying words of existentialism; the soundscapes along lead one into these moments of anxious bliss. The 2:16 “(Something)” arrives with some meringue stylings, and without uttering a single syllable returns the album back to a stable, almost cheerful, foundation. That calm is only momentary, as the album transitions into the post-rock chaos of “Book”. During the waking moments of “Spring”, a cathedral bell, gong, and amp feedback prelude the 13-plus minute dystopian score to follow.

Due to the very nature of Elverum’s creative process, and his various allusions to the “thaw”, Sauna is pinned contextually to February of 2015. However, even when the ground warms and the animals of spring return, isolated souls can turn to Elverum for some comfort. For many, especially in the social era, isolation isn’t synonymous with alone. And Mount Eerie stands as a beacon for all those seeking that sort of removal from the pains reality.