October 26, 2020
Home Books The History of Loneliness: by John Boyne 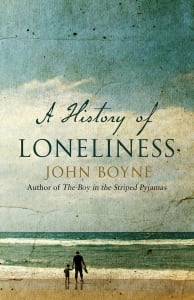 [xrr rating=3.5/5]A History of Loneliness dramatizes one priest’s determination to be a good man during a time when Ireland is rocked by revelations of sexual abuse by the clergy. John Boyne’s compelling narrative follows Father Odran Yates as he leaps back and forth in time to tell his story, from his admission to the seminary as a teenager, to his complicity in enabling his classmate, Tom Cardle, to avoid the repercussions of his crimes against young men. Yates and Cardle are men who have found their long-held position in Irish society erode as challenges to traditional power have undermined the status of the Catholic Church.

The book follows the struggles of a few young men who, whether idealistic or resigned, were terrified of being different and sought conformity in the seminary. Some, like Tom, felt pressured to remain there even though they were unfit for the priesthood. Boyne illustrates the demands placed on those channeled into the clerical system, showing the indifference with which many were treated by their superiors. However, as an Archbishop responds to accusations levied against Tom, “you can go back to your precious school and teach the little bastards about respecting the church.”

Father Yates reflects that, “of course the shades in my profession changed as one advanced through the ranks, from black to scarlet to white; darkness, blood and a cleansing at the very top.” The ease with which Boyne intersperses an occasional analogy or image into the priest’s first-person narration convinces the reader of the priest’s self-awareness. Boyne lets the priest’s difficulties unfold gradually as he ponders the difficulties with his role. A childhood tragedy and the Yates family’s struggles digress from the novel’s clerical focus, but they emphasize the trouble the narrator has fitting in to an altered society.

Father Yates served the Vatican as a seminarian, and Boyne creates a Roman backstory for the priest set in 1978, the year of the three popes. This episode is clever but feels melodramatic, engineered to account for the Father Yates’ low rank in the Irish power structure. Near death, Pope Paul VI asks Father Yates, “What will we do with Ireland?” This question haunts the Irishman, as he faces a nation that no longer admires its clergy.

Inside the Vatican, Father Yates witnesses church corruption and later senses a “darkness stirring” about his own fault. “I had seen things and I had suspected things and I had turned away from things and I had done nothing.” Debating how to treat Tom’s transgressions, he wonders, “if I cannot see some good in all of us and hope that the pain we all share will come to an end, what kind of a priest am I anyway? What kind of man?” Father Odran strives for decency, but he has done so too quietly. He has been spared many of the torments of some of his sexually frustrated or temperamentally warped colleagues, but he suffers too.

Journalists and historians have belatedly scrutinized the fall of the Church from grace. Boyne’s gripping, timely novel shows that Irish fiction is now ready to address this sad theme.

Revisit: The Who: Quadrophenia: Live in London

Unlike the protagonist of the LP, the Who continues to age well. …