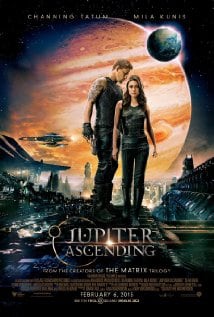 [xrr rating=1.0/5]My mother raised me to be a gentleman, teaching me to say something only if it was something nice. So rather than write a review about how Jupiter Ascending is one of the worst films I’ve ever seen, I simply made up a list of the ways the movie didn’t completely fail.

1) Ever see a film where it seems everyone but you understood the plot and its intricate details? You won’t feel bad about not understanding Jupiter Ascending, because nobody will have any idea what is going.

2) The other major US cities are suffering from action movie envy, I’m sure. New York and D.C. get the shit blown out of them on the regular. The fucking Golden Gate Bridge has been torn asunder time and time again. Well, Chicago is in luck! If you ever wanted to see the Sears Tower blown to smithereens, now is your chance.

3) Sean Bean’s character actually DOES NOT DIE in this film!

4) Jupiter Ascending must have cost a fortune with all its lavish effects. At least the Wachowskis asked Peter Jackson to borrow his Rivendell set to cut down on the overall budget.

6) I found out that the Wachowskis must have been either big fans of the Hardy Boys or alliteration.

7) Channing Tatum, starring as a human/dog hybrid, gets to float around with his shirt off for extended time. Luckily, he doesn’t have to tax himself by acting.

8) Speaking of acting, Mila Kunis doesn’t need to evolve into a badass like Keanu Reeves had to do in The Matrix. Instead, she can coast along and play the damsel in distress for most of the film’s runtime.

9) Eddie Redmayne didn’t have to do anything to make me believe he’s a good actor.

10) The laughter. Where else can you chuckle at lines such as, “Bees are genetically designed to recognize royalty”?

11) To everyone who waited to see Jupiter Ascending after it was pushed back from last summer, you can keep on waiting to see it and not miss a damned thing.