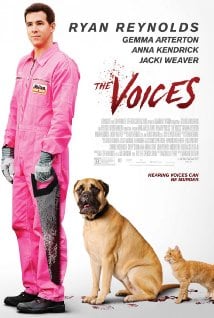 [xrr rating=3.5/5]The Voices is schizophrenic in every sense of the word. The tone is all over the place. This pitch black comedy by Marjane Satrapi (Persepolis) involves largely accidental serial killing, vibrant color schemes, matricide, talking animals with funny accents, offbeat romance, profound psychosis, a Slumdog-esque dance sequence and severed heads in the fridge. Ryan Reynolds essentially taps into the demented darkness of his character in the dreadful Amityville Horror remake, blends it with his trademark amiability and turns in a maniacal performance few others could pull off.

Reynolds plays Jerry, a formerly institutionalized, pink jumpsuit-wearing factory worker at a bathtub and toilet manufacturer. He is dependent on his therapy with Dr. Warren (Jacki Weaver) in order to keep even-keeled, but is increasingly resisting his court-mandated anti-psychotic medication. This leads him into many tense discussions with both his affable dog and his sociopathic cat, whose voices he desperately misses when they’re squashed under the normalizing haze of his pills. To start with, they counsel him about strategy for wooing the accounting department hottie, Fiona (Gemma Arterton), who tries her best to gently rebuff him. When Jerry offers her a ride on a rainy night, they hit a deer (who also talks to him), which leads Jerry to accidentally stab Fiona to death.

Following the directives of his Scottish-accented cat, Jerry chops Fiona up into little pieces and seals her up in dozens of Tupperware containers, while chilling her head in the refrigerator when he’s not carrying on cute and loving conversation with it. But soon Fiona’s slightly awkward co-worker Lisa (Anna Kendrick) beds Jerry, which leads to some jealousy from Fiona (who also pleads with Jerry to kill again so she’ll have another severed head to keep her company). As Jerry ditches the pills for good—and revisits his disturbing childhood in which his equally psychotic mother compels him to do the unspeakable—no one is safe, not even his psychiatrist.

In her direction, Satrapi walks a fine tightrope of grim humor. With its zany execution, The Voices gives far more laughs than any film possessing echoes of the Son of Sam (talking pets) and Jeffrey Dahmer (refrigerated body parts) has any right to. The loudly vivid color-scheme adds an unhinged aura to the entire effort. And even as the tone largely remains darkly comic, Satrapi isn’t afraid to delve deeply into truly frightening territory, such as when Lisa finds herself inside Jerry’s grisly home as he screams back at voices only he can hear. The film pushes the genre boundaries of comedy and psychological horror, and in doing so it bends without breaking.

But the highlight of The Voices is inarguably Reynolds. Jerry is a role tailor-made for a likable actor who can also deftly tread through demented terrain. As much a comedic role as it is a serial killer origin story, Jerry remains sympathetic throughout. And you would have a hard time picking out that he also voices all the talking animals. Profound mental illness is rarely a laughing matter, but The Voices proves that no subject is too bleak to wring laughs from. This film will surely confound some viewers, and it should come as no surprise that after appearing at Sundance over a year ago, it took a while to see the light of day in theaters. The schizophrenic tone may understandably put many people off. But for those who are game for anything, The Voices offers both belly laughs and gut punches.