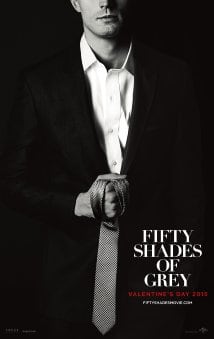 The story’s heroine is Anastasia Steele (Dakota Johnson), a college senior who interviews suave multibillionaire businessman Christian Grey (Jamie Dornan) for her school paper. He’s an entrepreneur with lots of toys—a helicopter, sports cars, a grand piano and, as we come to learn, a secret collection of whips, chains, handcuffs and other medieval ephemera he uses for BDSM sex play. Drawn to his fetish, naïve and virginal Anastasia agrees to mull over a meticulously detailed contract that will make her the submissive to his dominant. This is not a romantic arrangement, the contract states, but a business deal that will essentially make her his sex slave.

In its depiction of BDSM, the film strives for ultimate steaminess, but the air is completely stale. Dornan and Johnson lack chemistry, although, given Christian and Anastasia’s contractual—literally—relationship, it’s oddly fitting, albeit dramatically inert. It doesn’t matter that Dornan is a big, bland hunk of nothing on screen. His character is meant to be a big, blank slate, a hulking metaphor delivery system that alternately represents corporate America, the masculine ideal, sexual agency and any other male-minded symbol you can imagine. Anastasia is a similarly amorphous entity, a seemingly lucid, strong-minded person one moment and a doe-eyed nincompoop the next, and her maddeningly inconsistent behavior is exacerbated when the whips and chains come out, her sexual naivety both a source of dramatic tension and her only consistent character trait.

And therein lies Fifty Shades of Grey’s most glaring contradiction: it falls back onto hackneyed, gendered characterizations even as it deals with a supposedly transgressive subject, using BDSM’s alarming nature as showy window dressing for an utterly conventional romance story. Christian’s sexual fetish is intriguing to Anastasia, but it’s also the result of some emotional turmoil she makes a point to remedy; she considers his contract and endures his kinks, even enjoys some of it herself, but she desires something else, and aims to make him desire it too. She wants love, but in Fifty Shades of Grey love is less an emotional and intellectual ideal than it is an obligatory safe word, a portal back to the mainstream.