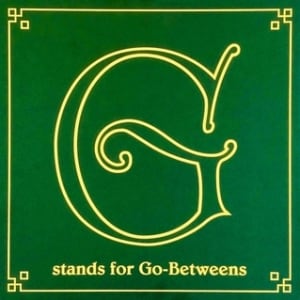 [xrr rating=4.25/5]Music consumers celebrating the second coming of Sleater-Kinney may forget (as I did) that once upon a time, members of the Olympia, Washington-based trio formed an alliance with the second coming of a band that made for unlikely compatriots. The Friends of Rachel Worth came along in 2000, 11 years after The Go-Betweens disbanded, and the musicians’ diverse pedigree formed, not an intense punk sound, but something much gentler. By the time The Go-Betweens called it quits in 1989, they had developed a bright pop sound that was worlds away from Call the Doctor. G Stands for Go-Betweens, the first of three proposed volumes that document the group’s career, reminds listeners who may only know them from their later records that the band’s self-described “striped sunlight sound” evolved from a spiky post-punk that made their late-career collaborators natural allies.

Still, a box set that consists of four remastered vinyl LPs (their first three albums plus a singles collection), four CDs of rarities and a generously illustrated book is clearly meant for the well-heeled, obsessive fan. But despite the duplication with previous releases, fans with money to spare will drool over this set.

The saliva is justified. The book alone may be worth your ducats, a thorough early history of the band from Robert Forster and Grant McLellan’s fateful meeting at school, to their leap of faith moving from Brisbane to London, through lineup and label changes. The first 600 pre-orders of the set came with a book from McLellan’s library, titles that included Dante and books on film theory, which tells you what kind of band they were. The nearly six hours of music included on the set is a lot of material, an expansive view of the band’s development over their first seven years.

The moody rocker “Karen,” from The First Five Singles, is the B-side to their very first single, and it establishes the group’s hooky, literary pop sensibility. Forster sings lead, looking for love with no small demands: “I just want perfection/ I don’t want no hoochie coochie mama.” He finds his answer in Karen (“Yeah yeah Karen”), a modest librarian who “Helps me find James Joyce/ She always makes the right choice.”

Rough Trade originally turned down the group for sounding “too commercial,” ironic for a band who barely charted. The Go-Betweens formed in early 1978, their early singles punky pop songs, but by the time they got around to their first album, 1982’s Send Me a Lullaby, they’d taken on a spiky post-punk that finally made Rough Trade come around. At this stage in their development, they were so post-punk that they even had a skronky sax player on “People Know.”

For those who came to The Go-Betweens when they were making shimmering pop songs like “Streets of Your Town,” their early years can be startling. Listen to drummer Lindy Morrison’s jarring solo in the middle of “Eight Pictures,” combined with Forster’s tale about an unhealthy sexual obsession: “And I shot you with my camera/ Caught you doing things with him.” But the end of “Ride” looks forward to the soaring pop they’d grow into.

Forster and McLellan met in an English class at Queensland University in 1976. Forster played electric guitar and was not a good student. McLellan was a good student and hoped to become a film director or critic (the enclosed book reproduces the review of Annie Hall he wrote for the school paper). Forster taught McLellan how to play guitar, and the rest was music history. Forster’s angsty vocal dominates the band’s early records, but McLellan grew into a more sensitive pop melodist, which brings us to “Cattle and Cane” from their second album, Before Hollywood (1983). This is where the band’s post-punk angularity and future pop craft met, and where they would part ways. This synthesis is one of their early career highlights, wistful but with a restless, neurotic rhythm. Before Hollywood shows their growth, and the growing distinction between the group’s songwriters, who take turns on the album’s title track. Forster’s angst-ridden cries of “Make me last/ Through our love” is broken by the gentler chorus of McLellan’s “We’ll show the world/ We’ll film ourselves in history and chrome.”

The group truly blossoms on their third album, Spring Hill Fair. The 1984 album opens with one of their great love songs, McLellan’s “Bachelor Kisses,” a lush production with singing synths and a chorus of sweet vocal harmonies that carried their most hummable melody to date. McLellan’s sugar is balanced by tracks like Forster’s catchy but bitter “Draining the Pool for You,” ostensibly about a pool boy but a metaphor for the band’s standby subject, the difficult relationship: “I got tired but not so blue/ To see the cracks in you.”

Spring Hill Fair would end the box set on a career-high, but there are still four more discs to go. The rarities follow the trajectory of the official albums, demos, B-sides and live tracks that move from loose poppy punk to funky post-punk. The strongest material is on the fourth disc, which covers outtakes and demos from Before Hollywood and Spring Hill Fair and includes tracks that would have earned a place of honor on the official releases. “This Girl, Black Girl,” a B-side from 1983, is one of those Go-Betweens songs that sounds like a cover of some obscure 60’s British Invasion song, but it’s a McLellan and Forster original. There are other essential non-album tracks here, but fans who shelled out for the expanded Go-Betweens CD reissues in the early ’00s will have a lot of it. G Stands for Go-Betweens can only be faulted for duplication, and not exhaustive at that. The lovely instrumental version of “Unkind and Unwise” from the B-side of the “Bachelor Kisses” single was included on the expanded Spring Hill Fair CD, but is not included here. Still, if you’re even thinking about getting this, I won’t tell you not to – unless, like me, you’re holding out for volume two. Unlike Sleater-Kinney, there can be no Go-Betweens comeback. McLellan died in 2006 of a massive heart attack suffered just hours before he planned to propose to his then-girlfriend. He was 48. A sadly literary demise suits a happily literary band.