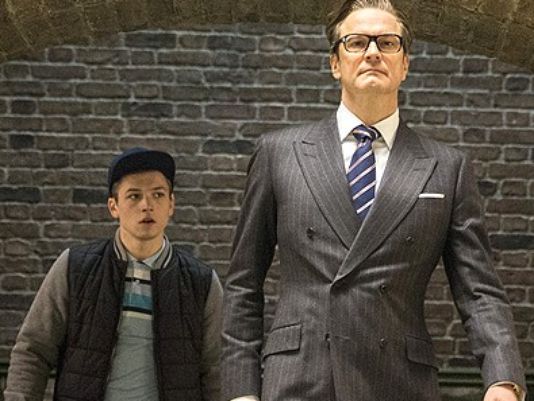 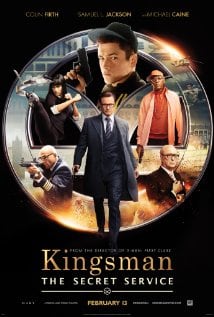 If you hated Kick-Ass, stay the hell away from Kingsman: The Secret Service. But if you’re the type of viewer who can forgive comedic violence and tap into your inner comic geek, then Kingsman is a fun, but inconsequential, night at the movies. Just don’t take any of that too seriously, and you’ll be just fine.

Based on the comic series by Mark Millar (who wrote Kick-Ass) and Dave Gibbons, and hanging on the most gossamer of plot, Kingsman concerns a group of British spies who meet their match when they go up against insane billionaire Valentine (Samuel L. Jackson). See, Valentine is planning to wipe out most of the world’s population in the name of saving the planet, using a frequency transmitted via SIM cards that will make everyone nuts enough to kill each other. Got that?

However, there are two stories taking place concurrently in Kingsman. As the spies (Colin Firth, Michael Caine and Mark Strong) battle Valentine’s nefarious plot, the organization is also looking to replace one of its fallen comrades. Among the candidates is Eggsy (Taron Egerton), the son of another dead Kingsman. Unlike the other contenders, he comes from a working class background with no future prospects. Eggsy must not so much overcome rigorous training— which includes escaping a room filling up with water and jumping out of a plane without a parachute—but elitism, as much of his competition comes from moneyed backgrounds. As much of the film is devoted to Eggsy’s evolution into one of the debonair Kingsman (spies who fight with hi-tech umbrellas while dressed in elegant suits) as it is to stopping Valentine’s plan.

All of the actors are clearly having fun with their roles, none more so than Firth, who takes on his typical stuffed-shirt character and adds a dose of ultraviolence. In one of the most inspired sequences of the film, his character fights and kills an entire congregation of a racist Baptist church, dispatching them with the sort of maniacal flair found in Oldboy.

That said, not all of the gags here work, and some of them (including a final scene where Eggsy saves a Swedish princess) are downright in bad taste. But with a film such as Kingsman, one filled with so many cringe-worthy moments, it’s hard to be an arbiter of taste. You either get on the ride or act like you’re too good for it.

Kingsman is the James Bond film that doesn’t take itself too seriously. How can it when one of its villains is armed with prosthetic legs so sharp they can cleanly slice a person down the middle? Granted, director Matthew Vaughn doesn’t have the talent to pull off homage at the same level as Quentin Tarantino’s love for grindhouse films. It feels more like a cartoon than red-blooded films such as Inglourious Basterds and Django Unchained. But sometimes, that isn’t the worst thing in the world.