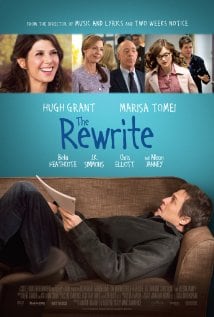 [xrr rating=2.0/5]Hugh Grant has become synonymous with rom-coms, relying on his infamous brand of bumbling charm to see him through dozens of rote genre offerings. Though in more recent efforts, his characters have veered more toward oblivious asshole than shy charmer, making for a slightly bigger hurdle to overcome on the way to rom-com redemption. The biggest constant in Grant’s career over the last two decades has been his collaborations with writer/director Marc Lawrence. The duo are responsible for Two Weeks Notice, Music & Lyrics, Did You Hear About the Morgans? and, now, The Rewrite. The trouble with Grant’s boyish act is that, now 54, he is still peddling the same fare of 20 years ago, and the strain on believability has never been more obvious.

It’s a flaw that Lawrence is well aware of and attempts to address immediately by having his lead meet and bed a 19-year-old (Bella Heathcote) within the first ten minutes of the film. But, again, believability is Grant’s worst enemy here. Lawrence’s basic premise shows immense comedic promise, setting up Grant as Keith Michaels, a screenwriter who once won an Oscar for a script called Paradise Misplaced (which is at most a top twenty favorite of his so-called “fans”) whose career has floundered ever since. His last-ditch option is to try his hand at teaching screenwriting, despite the fact that he thinks the skill cannot be taught. Cue the switch from the rejection of Hollywood to the small-town USA of Binghamton, NY and the formulaic conversion of this lazy has-been to a devoted teacher. Against all logic, his thinly-drawn, insultingly caricaturish students – mindless pretty faces, Star Wars-obsessed geeks and “adult learner” Holly (Marisa Tomei) who insists on learning how to improve her autobiographical script – inspire some responsibility in Michaels. It’s all terribly predictable and derivative, and in an example of painful irony, Lawrence too frequently allows his story about teaching screenwriting basics to be dominated by tangents that have little bearing on the trajectory of the film.

Most worrying is The Rewrite‘s treatment of female roles, under the guise of (misguided) humor. The reason for Michaels’ constant rejection by studio execs is his refusal to jump aboard the “kickass female roles”-boat. The hollowness of those pitch meetings are certainly fodder for great satirical comedy, but Lawrence takes it no further than using the rejection as a jumping off point for Michaels’ drunken, misogynist tirade about female empowerment in film at a faculty party on his first night at Binghamton University. From there spawns a hostile subplot between Michaels and Allison Janney’s Jane Austen-obsessed lit professor/ethics committee head who, very understandably, has it in for Michaels after his affair with his student. The joke, if anyone would call it that, might be easier to overlook in a film with fleshed out female roles, but Lawrence relegates those few roles to cardboard love interests or, in the case of Tomei, a supportive cheerleader for the lead because she is far too old to be a full-fledged love interest, apparently.

Where Lawrence and Grant have faltered with The Rewrite is misjudging what is funny and what is icky. The Grant character in most of these rom-coms is, to varying degrees, a cad. But he wasn’t irredeemable, especially since his redemption is the ultimate goal in these films. This effort, however, has pushed the persona too far for a credible redemption, let alone for the lead to be appealing. It may even be a mistake to label the film a rom-com, considering its marked lack of romance between Grant and Tomei. That in itself might be seen as novel if it weren’t for the implications of the character’s aversion to the sheer idea of the relationship.