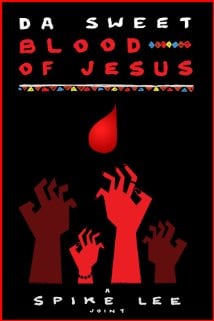 The discussion surrounding Da Sweet Blood of Jesus has rightfully fallen on the fact that director Spike Lee funded his latest joint via Kickstarter. Although he was not the first well-known director to go that route, his decision to crowdfund this picture spoke volumes about how unwilling the Hollywood system is to support the idiosyncratic visions of iconoclasts like the 57-year-old director. And after the butchering that FilmDistrict did to his Oldboy remake, is it any wonder that Lee is unwilling to answer to the purse string holders in California?

After watching Da Sweet Blood, there’s no doubt it was a savvy move to reach out to supporters, hat in hand. I hesitate to think of the god-awful, “True Blood”-style marketing campaign that could have led up to this film’s release. Nor do I think any major or minor studio would have released this as-is. The film, like Lee’s best fictional features, is unwieldy, overblown, compelling, sexy and deeply political. And it’s one of the director’s best films in nearly a decade.

A remake of Bill Gunn’s 1973 cult film Ganja and Hess, Da Sweet Blood concerns itself with the exploits of Hess (Stephen Tyrone Williams), a well-to-do anthropologist who comes into possession of a dagger from Ghana that carries with it a curse related to the bloodlust of the Ashanti tribe. While preparing to research the weapon from his home on Martha’s Vineyard, his assistant, Lafayette (Elvis Nolasco), loses his mind and stabs his employer with it. The incident turns Hess immortal, but also gives him a craving for human blood. His need is such that his first instinct upon finding that Lafayette has committed suicide is to lap up the man’s blood from the floor like an animal.

The story becomes more entangled once Lafayette’s wife, Ganja (Zaraah Abrahams), arrives on the island in search of her husband. She and Hess have an immediate attraction to one another and are quickly married. And just as quickly, she becomes like Hess, hungry for blood and willing to go to extremes to acquire it.

Gunn’s film worked as a commentary on the lengths to which wealthy blacks will sometimes go in hopes of assimilating into a mostly white world. In Lee’s hands, the symbolism expands out to involve itself with much more modern concerns. He sets us up at the beginning with a small treatise on violence in America, as spoken by a preacher at a Baptist church (the same sanctuary featured prominently in his 2012 film Red Hook Summer). That sermon haunts every horrible act, from the shot of a makeshift noose swinging from one of Hess’s trees after Lafayette’s first failed suicide attempt to the spilling of copious amounts of blood throughout. As unflinching as Lee is about showing us each spurt of red stuff, he’s equally unafraid to let the camera linger over the naked bodies of the film’s many characters. In fact, every interaction between two people has the prospect of either violence or sex. The delicious tension that Lee builds leaves you wondering which direction these conversations and long looks will go.

There’s a deeper truth to Da Sweet Blood, of course, and that’s put on the heads of everyone who watches it. Especially in recent years, the mainstream view of African-American males has been of potential violent offenders, and often of African-American women as potential sexual conquests. That’s exactly how Lee frames the characters in the film. Lafayette and Hess are somehow turned animalistic when faced with the violent past of the Ashanti tribe, and the women in the film become sexually available with just a few words from a potential partner. Lee forces us to confront these tropes and reckon with them. It becomes almost a litmus test to gauge your levels of titillation or unease with the flesh and/or blood onscreen.

Anderson’s movies are so infinitely re-watchable. …