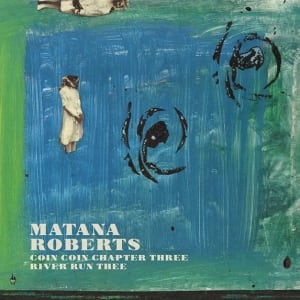 [xrr rating=4.5/5]Long after jazz ceased to be a propulsive force in either popular music or intellectual esoterica, Matana Roberts broke out in 2011 with one of the most ambitious projects that the genre had seen in decades, rivaled only by the recent epics from established legend Wadada Leo Smith. Roberts’ COIN COIN Chapter One was a ferocious blast of Archie Sheep and Albert Ayler, an anguished scream that recapitulated the legacy of American racism through the agonized howl of a woman who had to square historical pains with historical ones. Its successor followed up this anguish with protest of a different sort, a jumbled tour through the black music that arose as a response to unparalleled hardship, scored for Roberts’ sextet.

Chapter Three: river run thee finds the saxophonist working solo, albeit with enough overdubbing that this feels, in many ways, like her most vast installment of COIN COIN to date. The album doesn’t even open with Roberts’ sax but a layering of organ drone and field recordings of birds; the musician’s signature instrument only punctuates the soundscape when Roberts first intones the words “The South” as if invoking some dark, elemental evil and her saxophone stirs deep in the mix like an uncoiling serpent. “All Is Written” wades through sludge for 10 minutes, dredging up half-heard voices who rumble under Roberts’ own plaintive singing. The first chapter may have exploded with the screams of the tortured and murdered, but the artist’s latest release returns to those people as ghosts, mournful and ephemeral as they drift around bogs and glades.

Roberts largely leaves jazz behind on this release. The eerily sung opener gives way to the pure ambient noise of “The Good Book Says,” which in turn becomes the one-woman chorale “Clothed to the Land, Worn by the Sea.” Electronics, recordings, buried instruments and Roberts’ own voice, naked yet awash in the production all combine to give everything a flow that is occasionally punctuated by sudden fits of tangibility. “Dreamer of Dreams” pairs a spiked synthesizer blast with lyrical but fragmented saxophone lines, a radio transmission intercepted from whatever corner of deep space Sun Ra blasted off to back in the day.

As a continuation of Roberts’ mathematically planned but vividly stream-of-consciousness expression of national and psychological malaise, river run thee would evoke James Joyce even without a title that directly recalls the opening of Finnegans Wake. The album even harks back to John Cage’s adaptation of that book, all overlapping field recordings and somnabulent renderings of music. But where the water imagery in Joyce’s novel reflected the possibility of rebirth and purification, water in Roberts’ album signifies the transatlantic trade, the horrific ferrying of human cargo across an ocean to sell them into bondage. This manifests in various subtle, nightmarish ways, like the percussive pounding in “As Years Roll By” that could score forced rowing, or the way that a train squealing to a stop in “Come Away” contains the clank and rattle of chains.

One of the most powerful criticisms embedded within Roberts’ project on the legacy of black oppression in America is that her erstwhile format, jazz, has itself been buried and forgotten by a mainstream musical culture that is the product of African-American exploration but is driven by white approval and appropriation. With river run thee, she works in a decidedly white, modernist tradition, but upends that tradition by inserting a context rarely expressed through it. The album reaffirms the endless cycle of abuse by ending on a clip of Malcolm X denying that he is a racist, a cruel, and cruelly unabated, irony of African-Americans being accused of being the real racists for pointing out the racism in society. Roberts continues to excoriate the past and present for its failures; that she does so with such beautiful, multifaceted, ever-evolving music only makes her statements more devastating.