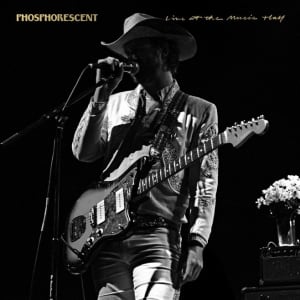 [xrr rating=3.75/5]After the outright triumph that was 2013’s Muchacho, Matthew Houck (aka Phosphorescent) deserved a victory lap. The release of the three-disc Live at the Music Hall feels like exactly that. The album’s 19 live tracks were culled from a four-night, late-2013 run at the Music Hall of Williamsburg in Houck’s adopted hometown of Brooklyn. Arranged together, they give off the feel of one cohesive effort by an artist at the top of his game.

Still basking in the glow of a banner year (Muchacho appeared near the top of many a best-of-2013 year-end lists, including #4 here at Spectrum), Houck delivers a performance that is, in turns, jammed out and scaled back into tenderness. Songs may skip by in three minutes or stretch out for over 10, but by picking the best bits from four nights of music, Dead Oceans has put out a live album that’s as definitively Phosphorescent as anything Houck has done in the studio.

Unsurprisingly, the live album treats us to a healthy dose of Muchacho, as Houck and his tour band play all but two songs from that album. “Sun Arise! (An Invocation, An Introduction)” opens the album with greater urgency in the live setting as the harmonized voices converge to create something powerful, and “Terror in the Canyons (The Wounded Master)” surges with emotive power as quavering pedal steel gives way at its climax to Houck belting until his voice turns raw. Meanwhile, “Muchacho’s Tune” goes soft in the three solo-song block near the release’s the tail end. With its robust buildup and the urgency in Houck’s voice, “The Quotidian Beasts” stands out far stronger here than it did on Muchacho. But “Ride On/Right On” feels more plodding and less jubilant than its album counterpart, while “Song for Zula” loses a hint of its power as well.

Elsewhere, Houck digs deep into his catalog. From his pre-Dead Oceans 2005 record, Aw Come Aw Wry, “Dead Heart” gets the eight-minute jammed out treatment, and “Joe Tex, These Taming Blues” slips by sweetly after the solo portion with Houck introducing his backing band throughout a long chunk of it. From Pride, we even get a couple of double-dips since they were recorded from two separate shows in the run. “A Picture of Our Torn Up Praise” and “Wolves” each are played solo and, later, with the full band. Live, these solos are a sight to behold as the audience grows still, all eyes on Houck and his guitar. But listening to this at home does stifle some of that immediacy, even if the performances are still strong.

If you’ve had the pleasure to see a Phosphorescent show, you will not be disappointed by Live at the Music Hall. This is a live album from a musician who is clearly enjoying what he does, and the occasional whoops from the crowd only emphasize how much more love Houck has garnered since Muchacho. It’s much more preferable to revisit that tremendous album, and to dip into the older tunes again too, than it would be to hear a hurried, half-assed follow-up. Hearing some of the best live versions of these songs, performed from Houck’s victory lap, only sweetens the deal.