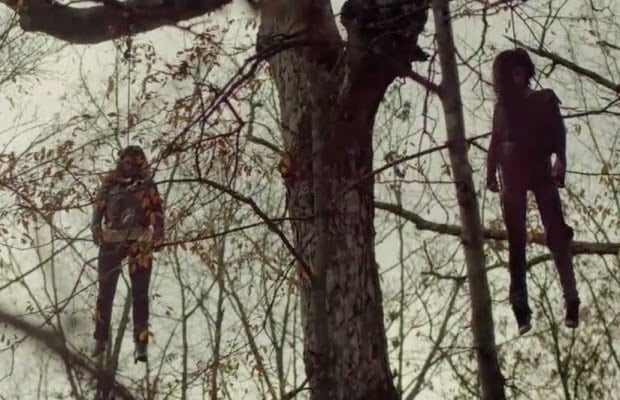 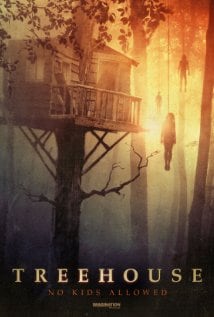 I’ve heard of a cabin in the woods, but this is ridiculous. That’s the extent of the vision behind Treehouse, a limited-release horror cheapie about a small, dilapidated cabin elevated off the ground. Some one-dimensional teens hole up there in hopes of surviving the siege of the dark forces that lurk in the woods. As is spoiled by the movie poster, some of those teens will end up hanged in the surrounding trees. Others will not. Eventually, the heretofore unseen monsters are revealed and dealt with. The end.

No one should expect much from Treehouse. The film’s director, Michael Bartlett, had previously only collaborated in making some zombie and paranormal found footage knockoffs in the UK. Its actors largely have done minor TV or straight-to-video work, or B-movies with titles like Jurassic City. Its screenwriters are picking up a feature-length credit for the first time. This flick is clearly intended for a B-movie audience devoted to horror at its genre-iest. But dear god, this scare-less, exposition-heavy, poorly acted dud could’ve done a lot more with its $3 million.

Some of that budget went to renting the aircraft used to capture the superfluous aerial shots of Missouri landscape. A heavy-handed suspense score (including a recurring theme featuring what sounds like a rusty guitar string) is used in place of, well, actual suspense. You won’t hear a more tension-soaked score accompanying a two-minute, all-angles sequence of a boy gradually climbing a tree.

We don’t learn much at all about these imperiled teens. The film opens with Elizabeth (Dana Melanie) finding mud tracked through her house and hearing a scary noise. A note on the fridge proves it couldn’t be her absent father, so she picks up a shotgun and wanders around the house and the nearby field barefoot, calling out for her brother, Little Bob. We then get to witness the film’s horror-free first act, in which Killian (J. Michael Trautmann) remains on the receiving end of generic bullying at school. His big brother, Crawford (Daniel Fredrick), sticks up for him. Planning to meet up in the woods with some girls, the brothers decide to shoot off fireworks first. They find a wounded Elizabeth in the old abandoned treehouse. Shadowy creatures close in and do some boogeyman stuff. They’re able to keep Killian and Elizabeth (Crawford has run off to get help) cornered by whooping and throwing rocks.

The two teens kindle a romance of sorts while uttering things like “we have to get out of here” and “after all we’ve been through.” Elizabeth incessantly calls Killian “baby bear” in a Southern drawl. They talk about their respective families for a while before eventually venturing outside under the cover of night. The assailants become less and less ominous as the film drags on. The reveal of their identities is a letdown even for such a poorly constructed buildup. And Treehouse’s final deus ex machina scene is too ham-fisted to even be cheesy.

Not even die-hard horror genre enthusiasts are going to find much red meat in this film. A skilled editor could’ve maybe whittled this down to about a 30-minute trifle, by excising the melodrama and ramping up the forest-dwelling malevolence. But by taking its thin plot and toothless execution so seriously, this film can’t even rise to the level of B-movie camp. Stay the hell away from Treehouse.