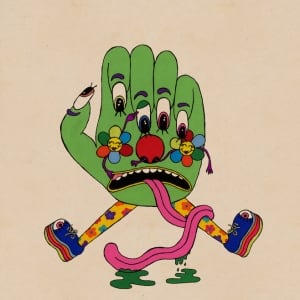 [xrr rating=3.5/5]In recent years, Dan Deacon has been focused on big ideas. His 2012 album, America, was meant to be as vast in concept as the sprawling swaths of land between sea and shining sea. That album—his first after ditching Carpark Records for Domino—was richly diverse and as enigmatic as much of Deacon’s work. The Baltimore-based electro-pop savant told NPR that the record was inspired both by his increasing distaste for American culture and, conversely, his affinity for its gorgeous landscape. In a shift away from his early bread and butter, Deacon went with live instruments in order to incorporate the inherent “flaws” that organic instrumentation can offer over the technical precision of electronics. A special echo-free chamber was constructed specifically for one track. Hell, a year before that, he’d been scoring films for Francis Ford Coppola.

For all its flourishes, America also was inspired by Deacon’s early days, when he would tour solo via commercial bus line through much of the contiguous 48. It’s fitting then, that Gliss Riffer arrives three years later under the guise of a return-to-form record. For an artist who rose to fame by immersing himself and his gear within the throng of the audience at his shows, the grandiosity of America felt like something of a reach. Rather than claim to encompass something as heavy as the contrast of America’s natural beauty and social ugliness, Gliss Riffer bears a title that’s something of a self-deprecation—“gliss” refers to Deacon’s trademark use of layered glissando, or rapidly ascending or descending notes. Deacon even returns to the Disklavier, a “MIDI-fed player piano” that he used on 2009’s Bromst.

The result is another strong entry into Deacon’s discography, even if by returning to the well he avoids having to give us anything entirely new. Gliss Riffer is as layered as ever, its walls of sound doing many things all at once in such a way that it’s difficult to decipher which direction they’re going. Deacon does ramp up his vocal presence. Lead-off track and first single “Feel the Lightning” is the album’s most accessible track. Alternating between differently manipulated vocal effects (the most prominent of which warps Deacon’s voice into one that’s seemingly female), the track follows a driving beat. As Deacon sings of “lightning covering your skin” and “infinite visions” and “ten thousand eyes and four hundred hands,” there are moments where it almost sounds like one of those Symphony of Science videos.

“When I Was Done Dying” offers nearly un-manipulated vocals for long stretches, and even as Deacon’s voice is multi-tracked, both the cadence in his voice and his vivid lyricism surprisingly recall Modest Mouse. “Sheathed Wings,” despite featuring the most rapid-fire “gliss” riffs, also works in Deacon’s nearly untainted voice before it’s warped and looped into hazy oblivion. “Meme Generator” goes glitchy with stuttered vocal samples and slower, looser instrumental backing. Robotic babbling on “Mind on Fire” pairs well with a more reach-for-the-stars transcendence that segues well into the churning and borderline cacophonous “Learning to Relax.”

Deacon has always been an artist of contrasts. His popularity belies accessible sensibilities nestled within seemingly impenetrable layers. He puts out both high-minded conceptualism and club-friendly beats. He’s capable of majestic ambiance (such as on closer “Steely Blues”) and divergences into the abrasive. On Gliss Riffer, Deacon pulls off yet another trick, cloaking a modest step forward within a return to form.