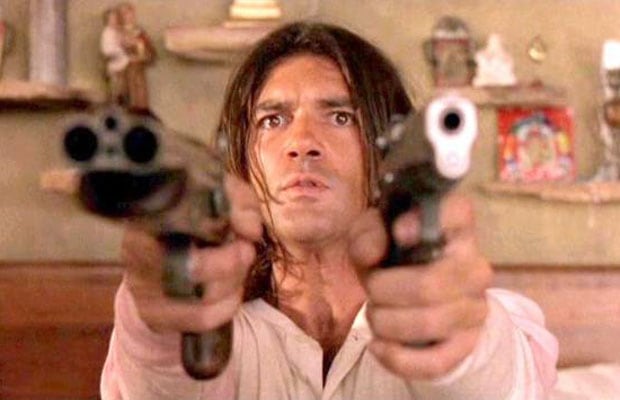 In 1992, director Robert Rodriguez made his debut feature film El Mariachi for a measly $7,000. He worked with amateur actors who doubled as his film crew, cut corners in every element of the production and ended up with an efficiently thrilling action movie that was a surprise hit. Three years later, with star power and a budget of $7 million, Rodriguez took his miserly cinematic genius to the big leagues with mixed results. Desperado is a flawed movie, but 20 years ago, I loved it. Its flaws are more apparent to me today, but it still does enough right to make up for them.

The movie begins with a bit of myth-making when a gringo (Steve Buscemi) walks into a bar in Mexico telling stories of the biggest Mexican he’d ever seen. He’s exaggerating of course; El Mariachi (5′ 9” Antonio Banderas) isn’t even the biggest Mexican in the movie, but his reputation as a gunslinging former guitar player makes him out to be a giant. This story is scored by Link Wray’s “Jack the Ripper,” which cuts the perfect tone of the pop culture outlaw. But Buscemi’s smart-alecky persona, which works fine in other films, diminishes the sense of menace, making El Mariachi seem larger to characters in the film but smaller to the audience—a knowing, inside joke that makes the movie less badass than it should be. Which may well be the point; Buscemi is El Mariachi’s heckler/conscience throughout the film, asking if his need for revenge can ever be satisfied, and then what’s the point?

Buscemi starts the movie on the wrong foot, and a cameo by the ever-unreliable actor Quentin Tarantino doesn’t help, but Rodriguez eventually lets El Mariachi assert his authority. The movie reveals its self-conscious haze with details that seem as threatening as they are funny, like Danny Trejo (playing an early version of his character Machete) dialing a phone number with a knife. But Desperado doesn’t really sing until El Mariachi meets a woman shaped like a guitar.

The biggest seeming Mexican in the movie leaves a bloody gunfight in a bar, pursued by the massacre’s lone survivor. As El Mariachi walks down the street, Carolina (Salma Hayek, in a breakthrough role), walks toward him. Here’s where Rodriguez drops the bullshit and lets loose a patiently paced, slow-motion vignette of guns, cars (that crash when Hayek walks into the frame) and a girl. The scene works so well it’s frustrating that Rodriguez doesn’t do this all the time. He ends it not with a kiss or a walk into the sunset, but with the soon-to-be-lovers dissolving out of the frame as if it had been a dream.

The movie’s El Mariachi is a myth told among ordinary citizens and the criminal set alike, and Banderas, all prominent brow and black clothes, is frequently kept in shadows, as if he isn’t really there. But he is there, and Rodriguez shows the corporal form of the myth, as his bloodied shoulders scrape past decrepit buildings leaving his red mark as if he were a painter, making art of his wounds and transgressions. (Buscemi is essentially his confessor as well). 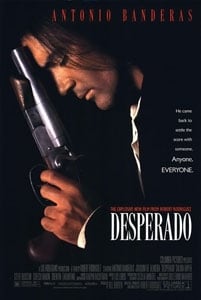 This vengeful shadow was a mariachi before a drug lord’s gang killed the woman he loved and shot his fretboard hand. Desperado is in the tradition of revenge tragedy like Massacre at Central High in which a peaceful hero’s creative outlet is taken away, replaced by an insatiable bloodlust. It’s a story of art corrupted—a young boy learning to play guitar exchanges instruments every few days as an unwitting mule, passing on drugs through the tool of his music.

The more wounded that El Mariachi becomes, the better the gunfights. Rodriguez stages a particularly operatic confrontation in which El Mariachi pushes himself off the roof of one building, guns blazing as he lands on another building across the street. Carolina and her hero walk away from the resulting explosion with a slow motion resolve that they can overcome anything together. Rodriguez edited the film himself, and his shot rhythms get better as the film goes along. His writing may fail him from time to time, but all is right again when he lets cinema do the talking.

The promise of a great rock ‘n’ roll Western suggested by Link Wray early in the film finally pays off in the film’s penultimate showdown, scored by Los Lobos with post-Wray swagger. The movie is filled with Western cliches—an injured shooter dives off a building, screaming to his death as he uses his last moments to get a few more shots off at El Mariachi. All those guns hidden in guitar cases? Art is a weapon, motherfucker.

The film’s principals went on to lucrative and respectable careers. After working with Almodóvar for years, Banderas had just broken through in American with The Mambo Kings. In 2011, Banderas reunited with Almodóvar for The Skin I Live In, a highlight in both their careers. Salma Hayek went from Hollywood sex symbol to producer and director, and earned an Oscar nomination for her portrayal of the artist Frida Kahlo in a film she co-produced. Robert Rodriguez continues to make B-movies like Machete (2010) and blockbusters like the Sin City franchise, but sometimes I think he never made a better movie than El Mariachi. Desperado, 20 years old, is his next best.