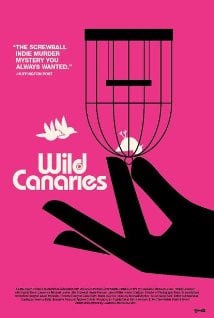 [xrr rating=3.5/5]For far too long the screwball-mystery mashup has been absent from regular film fare. Writer-director Lawrence Michael Levine sets out to remedy that sad fact with his third feature Wild Canaries. Much like Woody Allen’s Manhattan Murder Mystery, Levine’s film centers on a pseudo-bohemian New York couple whose elderly neighbor dies suddenly of a heart attack. Noah (Levine) chocks it up to old age, but Barri (Sophia Takal) is certain that there is call for suspicion. Their differences of opinion surrounding a death in the building fester into late-night screaming matches and threaten to throw a wrench in their relationship. What ensues is a wily caper that cleverly juggles the complexities of this whodunit while simultaneously managing to say a lot about domestic tensions.

The opening scenes of Wild Canaries – aside from the Charade-esque opening credits – focus on establishing the personalities of Noah and Barri. Turns out, they take the concept of “opposites attract” to a dangerous extreme. Perpetual killjoy Noah is a struggling filmmaker at the mercy of financiers. Barri, by comparison, cannot contain her childlike exuberance and spends most of her days planning out her dream of renovating an upstate resort. Noah has no such dreams. And thus Levine lays the foundations for the undercurrent of resentment between the two. Barri’s new penchant for play-acting Columbo (with trenchcoat and fedora) only strains the situation.

As Barri insists, not only was their downstairs neighbor perfectly healthy, her son, Anthony (Kevin Corrigan), wastes no time mourning before selling off all her expensive furniture. And so her vivid imagination, perhaps peaked by a recent Hitchcock retrospective, is only satisfied by extensive, amateurish sleuthing. Barri’s one supporter in all this is their lesbian roommate and Barri’s would-be business partner, Jean (Alia Shawkat). The two tag-team a stealthy visit to the apartment looking for evidence of Anthony’s financial woes. But just as soon as Barri formulates a motive, her suspicions fall on their artist-landlord Damien (Jason Ritter) whose divorce may be stretching his liquid assets a bit too thin.

At each new theory, Noah grows more and more exasperated with Barri’s obsessive sleuthing. His go-to defense of his neighbors is that “acting weird is not a crime.” But when he is roped into paying a clandestine visit to Damien’s apartment and witnesses a criminally clever use for rubber face molds, Noah must admit that something sinister is afoot. Noah himself comes across as a blend of Chinatown‘s Jake Gittes and The Long Goodbye‘s Philip Marlowe. He is reluctant to become embroiled in anything too emotionally complicated voluntarily, but his twisted luck ensures that he does. And while he does take a beating as the film wears on, his conspicuous neck brace is actually caused by a mundane muscle spasm. He is the epitome of the unlucky bystander and drags his feet the entire film until forced to help solve the mystery.

The joy of Wild Canaries stems from its wickedly funny screwball sensibility and Levine’s stylistic touches. For starters, Michael Montes provides a score full of trumpets that complement Barri’s escapades perfectly. Couple that with Levine’s cartoonish camerawork that irises in and out between Scooby-Doo-esque investigative scenes and Levine’s goal for Wild Canaries would seem to be pure, raucous comedy. But his script cleverly balances that comedy with his recurring theme of relationships in turmoil. The murder mystery at the forefront of Wild Canaries provides the means for Noah and Barri to put their relationship to the test and ultimately make some gains in strengthening their bond. Between solving a crime and solving deep-seated relational problems, an innocuous mystery is a welcome diversion.