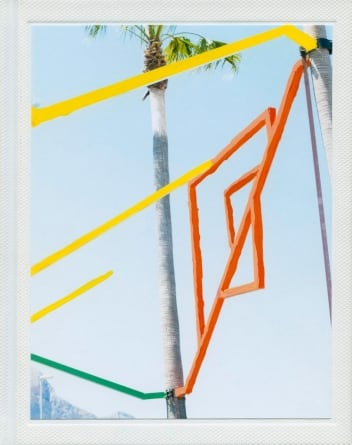 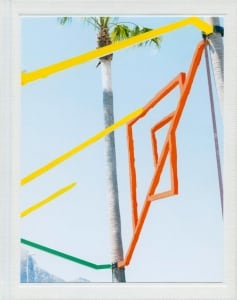 Great photography makes you look closer at the world, not just as a way to record detail but to tell a story and to ask questions. This is what the work of Spanish photographer Ricardo Cases does. His previous photo book, Paloma al aire, documented a very specific subculture in an unusual format. Cases depicted Spanish pigeon racers with colorful photos printed in a spiral-bound book whose cardboard cover had an oval shape cut out that revealed the face of one of the pigeon racers inside. The images were deliriously vibrant, the printing highly saturated, but the book’s design deliberately worked against the material, the spiral binding at one point severing one bird-watcher right through the middle of his binoculars. Cases told the British Journal of Photography that, “In Paloma, the photograph is the ‘victim’ of the book. Every picture is broken in two by the gutter and the wire.” His new book, El porqué de las naranjas, is “‘in the service of’ the photograph.” It’s a more conventionally produced hardbound volume, but it’s no less colorful, delightful and mysterious.

Cases’ mystery has a simple logic. The title of his book translates loosely to The Reason of Oranges, and its first images establish what seems to be a clear pattern. An orange is lodged between a curb and the wheel rim of a parked car. The warm glow of what might be cooking oil settles on a tray under a single raw chicken leg. Cases links wildly diverse images with some touch of orange (which, I must disclose, is my very favorite color). But this logic still holds a mystery, albeit the kind of mystery that starts you to thinking that the color orange brings order to a chaotic world with some unknowable meaning.

Orange does mean something. Cases told the BJP that, “one of the symbols of the Levante region [the area of Spain where he made these photographs] is oranges, but also tourism and construction.” The color is sometimes interpreted explicitly, in fire and in fruit. Sometimes it emerges in subtle details, like the orange piping on the white dress of a young girl suspended by wires in what one supposes to be a photo shoot casting the girl as an angel. Sometimes hues are orangish, as in earth tones or bread. In a few pictures one is hard pressed to see orange at all, as in a white wall marred by green and silver graffiti. Cases turns the reader into an orange spotter, following a logic that becomes more abstract and subjective, which seems like a metaphor for the state. While the images printed for his previous book were full-bleed pages that announced their colors and details quite clearly, the smaller reproductions of these images require the viewer, especially those whose eyesight may be failing, to bring the image closer in order to divine its colorful secret.

The book’s conceit also seems to caution the viewer into interpreting the world simply through one filter. As an organizational principle, orange creates a narrative among objects and subjects that have no inherent relationship. Thus good photos become a great photobook by nature of sequencing that is clever enough to suggest narrative but ambiguous enough to make the reader think. El porqué de las naranjas closes with a variation on its cover image, a photograph of palm trees linked by an abstract network of yellow and orange lines. I find myself turning the pages back and forth as if I were rereading pages of a novel to remind myself of a character’s name or suss out their motivation. Cases’ deceptively simple book invites us to follow a strange narrative that’s at once easy to follow, but a struggle to understand. But it is this very struggle for meaning that makes it worthwhile.