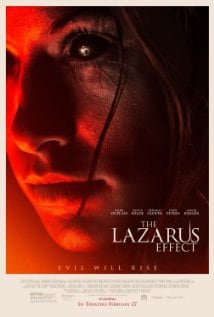 [xrr rating=2.5/5]Sometimes dead is better. That nugget of wisdom was passed down to us by Jud Crandall in Pet Sematary, a film that immediately comes to mind when the snarky group of medical researchers in The Lazarus Effect resurrect a dog. The subject matter in the feature film debut of documentarian David Gelb (Jiro Dreams of Sushi) is nothing new; the reanimated corpse has shambled its way through popular horror since Dr. Frankenstein first threw the switch. An implicit element of the mad scientist-playing-God narrative is that cheating death only creates monsters.

The Lazarus Effect does not strive for subtlety in its science versus the supernatural framework. If the biblical title isn’t obvious enough, the frequent debates about an afterlife, recurring flashes of a golden crucifix and eventual blend of Carrie meets a PG-13 The Exorcist spell it out further. But what devolves into a light-flickering jump-scare fest by its third act actually opens on solid ground.

After a number of failed trials, a group of researchers led by Frank (Mark Duplass) and his fiancée Zoe (Olivia Wilde) make a breakthrough. They bring back man’s best friend. But their milky “Lazarus” serum works too well. Not only does the dog come back to life, but its profound cataracts disappear and its brain scans reveal that the serum isn’t dissipating as intended. Instead, the resurrection serum continues to build exponential neuron connections. The pooch also starts acting awfully strange.

As Frank and Zoe celebrate with the rest of their crew (the impeccably cast Donald Glover and Evan Peters) and a fledgling documentarian (Sarah Bolger), they converse about the nature of life and death. Frank subscribes to the scientific theory that the ungodly amounts of DMT (the world’s most powerful psychedelic) that our brains naturally secrete while dying are the explanation for the otherworldly imagery reported in near-death experiences. Zoe, who happens to be plagued by hellish nightmares, believes the DMT is only meant to open a door to the other side, and that Frank’s reductive rationale is arrogant because we can never truly know. She’s about to have the misfortune of finding out the truth.

Apparently, Frank sucks at reading contracts, and by violating the university’s no-bringing-dogs-back-to-life provision, he opens up all his intellectual property to be commandeered by a greedy pharmaceutical company (announced via a creepy cameo by Ray Wise). But when they break into the facility to duplicate the experiment, Zoe accidentally gets zapped to death as they throw the Frankenstein-ian switch. Good thing Frank has a resurrection serum inches away, huh?

Up to this point, The Lazarus Effect is actually pretty good. If you’ve seen Jiro Dreams of Sushi, you realize that Gelb knows how to frame a shot. The philosophical discussions about chemistry versus metaphysics are accessible yet not altogether dumbed-down. Duplass brings charm to the tired mad scientist trope, while Glover and especially Peters shine in their laboratory banter. Sure, Frank and Zoe are stupid enough to bring home a resurrected dog and keep it unrestrained, but in these early stages, the dog’s creepier tendencies are handled with a degree of subtlety. Much like Insidious (also produced by Blumhouse Productions), a solid buildup simply unravels when things go full paranormal.

Zoe is resurrected and seems like herself, yet her brain scans show disturbingly unprecedented results. Soon she’s reading minds and is telekinetic as all get out. By the time her eyes go black and she’s projecting hellish dreamscapes onto other people, the film’s wheels have come off. But as much as The Lazarus Effect borrows from Frankenstein (even jokingly parroting the “It’s alive!” line), Re-Animator, Pet Sematary, Limitless, Lucy and the worst bits of virtually every CGI-enhanced jump-scare film of the last decade, it does start kind of fun. It’s just a shame that The Lazarus Effect takes a viable premise and lively cast and simply flatlines them.