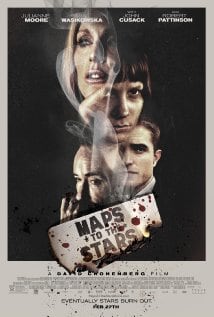 It shouldn’t come as a surprise that David Cronenberg has made a satire. On the outskirts of so many of his films, somewhere hidden behind the squeals his body horror incites in Rabid and The Fly and sidelined by the thought provoked by his depiction of various media in Videodrome and eXistenZ, it has always been clear that Cronenberg is, among so much more, an observer of our anxieties and shortcomings. It’s perhaps this commonality that has led the director to insist we separate his film from satire. But satire is only a small change of direction away from where he has long stood. With Maps to the Stars, he takes that step, approaching a specific group of people and then holding up their flaws for ridicule rather than turning them into objects of fear. His foot lands in Hollywood as surely as those of Agatha (Mia Wasikowska), who has come to L.A. to find her family and maybe get a job working for Carrie Fisher (although she ends up with Julianne Moore’s Havana Segrand instead), whom she met online.

It’s not exactly fair to say that Cronenberg lacks the in-depth experience with Hollywood to say anything of nuance about it. The Canadian director has only been part of the system for The Dead Zone and The Fly, as well as a couple “almost” projects, including a year of scrapped work on Total Recall. But it is instructive to compare Cronenberg’s experience to David Lynch’s, as Cronenberg’s heightened performances and thematic preoccupations somewhat recall those of Lynch’s two most recent features, Mulholland Drive and Inland Empire. Those films are two of the greatest poisoned love-letters ever addressed to Hollywood, even though Lynch had only made three films there (The Elephant Man, Dune, and The Straight Story) before he postmarked those letters. But Lynch had also made a hugely successful network TV show in “Twin Peaks,” which earned a movie prequel, had two failed TV shows under his belt and a third if you include Mulholland Drive, which was originally intended for short-form. Perhaps most significantly, though, Lynch bombed out of Hollywood because of Dune’s failure whereas Cronenberg left on his own terms after The Fly, a box-office smash and a critical darling.

In any case, Maps seems promising enough. The film intercuts a number of stories, namely Agatha’s attempt to reconnect with her estranged brother Benjie (Evan Bird), an obnoxious, rehabilitating child star; their parents, controlling and egotistical incestuous siblings who were separated at birth; Havana’s attempt to earn a part in a remake of a film that her famous mother starred in and to deal with memories and/or feelings of parental abuse; and Jerome (Robert Pattinson), a limousine driver/aspiring actor-screenwriter who begins dating Agatha. Also of significance are the managers, agents and competition that interfere with the lives of the main cast along with the parties, drugs and alcohol that haunt the outskirts of Hollywood and the ghosts that literally haunt Benjie and Havana. Not all of these characters cross paths, and one of the annoyances or pleasures of Maps (depending on how much one can tolerate the film’s overt stylization) is seeing how Cronenberg will or will not elect to bring them together.

This is the first time that Cronenberg has worked an ensemble through such disparate storylines, and for quite a while the film jumps between characters and threads without an apparent reason. Exposition is doled out slowly, in small amounts and infrequently, so for a little too long we have to content ourselves with watching Julianne Moore channel the version of herself that gives great performances in Todd Haynes movies, this time playing an actress clamoring for big roles and awards. Unfortunately, this depiction is too broad a blow to generate much interest even if Moore’s channeling is largely successful. Benjie’s story, full of intentionally bad and ill-advised jokes, club scenes, parties and his treatment of a scene-stealing peer further line us up against a specific Hollywood, prestige-driven vanity that is difficult to separate from its specific setting—despite Cronenberg’s insistence, this is a targeted satire through-and-through. The club and party scenes only make this more obvious, yet those scenes are entirely redundant: nothing done by a minor character is nearly as bad as Havana singing “Na na na na, hey hey hey, goodbye” at an inappropriate moment or Benjie’s “jokes.” These two characters showcase the film’s best trick—an anti-comedic use of intentionally bad jokes that aim not to make us laugh but to reflect on the people telling them—that provides an original, distinctly Cronenbergian touch on a canvas otherwise painted with broad strokes.

More consistently successful is Agatha’s storyline, which develops intrigue quickly and serves as a bridge between the other protagonists. Her distance from Hollywood is signified by her repeated quoting of Paul Éluard’s “Liberty,” one of the Surrealist’s more poignant works, an ode to freedom written in Nazi-occupied France. Éluard represents a type of high artistry that Hollywood is curtained off from, a favorable alternative to the commercialist aspirations of Havana and Benjie, and also an incredible synecdoche for the film’s politics. Surrealists saw their art as a necessary escape from bourgeois ideologies, something that resembled the work of asylum patients that could not be confined by “normality,” and whose inaccessibility to the masses did not equate with a bourgeois elitism. Given Agatha’s own troubled mental history, the film’s Surrealist ideology seems crucial, although Cronenberg’s strained seriousness and broad strokes don’t compare favorably to the prescient specificity and sharp wit of Buñuel’s best films.

All of this makes for a curious but ultimately unfulfilling spectacle. Performances are effectively stylized, humor arises in unexpected ways, and the story itself accumulates interest as it goes, but by the end Cronenberg’s message feels trite and well-worn. Both ego and Hollywood can kill, as the film’s over-determined climax tell us, and such issues are systemic and inbred, as symbolized by incestuous couples and Havana’s mommy-issues. There are less creative ways of getting at these points, and cheers to Cronenberg for doing things his way. But there are also more nuanced ways to say it and indeed, more nuanced things to say. Such a shortcoming feels here more like a director’s error than a screenwriter’s. So while it may not be a surprise that Cronenberg has stepped toward satire, it is a surprise that little of his insight or innovation seems to have taken that step with him.