The Straight Story should be a David Lynch outlier. Smack dab in the middle of a four-year stretch that also showcased two of his most nonlinear fever dreams, Lynch made a G-rated Disney movie about a kindly old man. Unlike his other films, he had no hand in writing the script (though it was penned by a longtime collaborator in Mary Sweeney). As the wordplay in the film’s title suggests, this biographical drama about the low-visioned, enfeebled Alvin Straight (Richard Farnsworth) making a nearly 250-mile journey on a slow-moving lawn tractor to visit his stricken brother is without a doubt Lynch’s most straightforward film—its narrative as linear as the old man’s incremental road trip. In fact, Lynch shot the film in chronological order, following the same route of the real-life Alvin Straight. And yet, for as uncharacteristic as the subject matter may be, this heart-warmer remains positively Lynchian.

The director’s preoccupation with small-town life is well-documented, and was perhaps most evident in Blue Velvet. In the early ‘80s, an interviewer presumed that—based on the surreal and downright disturbing nature of his Eraserhead debut and, to a lesser degree, his Oscar-nominated biopic The Elephant Man—Lynch had endured an unhappy upbringing. Instead, the eccentric director explained that he’d actually enjoyed a Norman Rockwell childhood, but had always been fascinated by looking deeper into the nature of things, to the point that he could peer into the seamy side of the idyllic. In The Straight Story, Lynch curbs his penchant for crafting dark underbellies, instead harnessing this malevolence and taming it in order to depict the aging process itself as the inevitable darkness of life. After all, as Alvin relates to one of the many younger people he encounters on his six-week John Deere-propelled odyssey, the worst part of getting old is “remembering when you was young.”

Instead of overtly-depicted portent in The Straight Story, Lynch uses some of his mainstay imagery to belie an underlying tension that—as its G-rating clearly indicates—never bubbles over into outright danger. Sound has always played a crucial role in Lynch’s films, and here we get some of the same humming, thrumming, whooshing and whirring noises that so often disorient in his more surreal pictures. But Lynch grounds these otherwise disconcerting sounds to explainable sources, with engines, factories or the pelting rain and thunderstorms accounting for noise imbued with a tension that never fully manifests. Even the incessant rattle of Alvin’s put-put lawnmower provides the director with the cinematic tools he thrives upon, allowing him to craft a family-friendly film about loyalty and determination that doesn’t undercut his sensibilities. 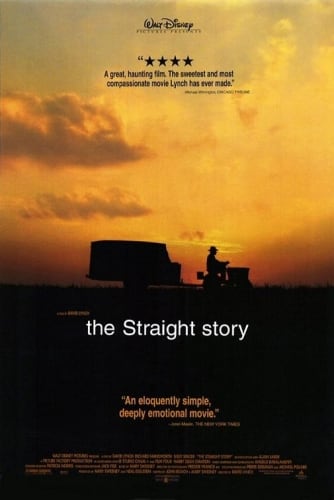 Visually, The Straight Story offers a plethora of Lynch touchstones as well. Fire has long played a crucial role in his filmmaking, with matches lighting tobacco, wind struggling against the flicker of a candle or entire houses engulfed in flames recurring in much of his work. As Alvin makes the daunting trek, he spends each night around his campfire, roasting wieners or road-kill venison. The primal influence of a campfire allows him to reach across generations and deeply converse with the many people he comes across, most notably a pregnant teenage runaway whom he indirectly convinces through parable to return home. He’s often lighting the beloved Swisher Sweets he refuses to give up, even upon doctor’s orders. And Lynch even throws in a raging house fire (in this case an intentionally set firefighting exercise rather than anything along the lines of Lost Highway’s burning cabin in the desert), in case those other examples remain too subtle.

The parallels to the shiny, happy façade that bookends Blue Velvet are striking throughout. Waving firefighters represent the charms of small town life in that film, while hardware stores also played a prominent role, as they do here. Meanwhile, there are sequences along the road in The Straight Story that mirror those in Wild at Heart, with Lynch’s more madcap tendencies harnessed by subtlety. As a woman slams into a deer with her car right in front of Alvin, she launches into a bizarre lament about how she’s unintentionally killed a staggering number of deer along this long stretch of highway in which she must commute for work—and she “loves deer!” This moment hearkens to the dazed monologue of a disoriented Sherilyn Fenn in Wild at Heart as she staggers around the scene of a wreck looking for her comb because she’s “got this sticky stuff in [her] hair.”

The typical Lynchian darkness may simmer during certain moments, but it never bubbles over as it inevitably does in his other movies. Instead, Alvin is able to skid to a stop when his riding mower’s brakes fail him on a steep slope. Everyone he meets along his journey is “Midwest nice,” with either kindness to offer or a life lesson to learn from wise old Alvin. Unlike virtually all of the director’s other movies, there is no violence of any sort, other than the emotional scars caused by Alvin’s estrangement from his brother (Harry Dean Stanton) and the indignities endured by his mentally-disabled daughter (Sissy Spacek). But perhaps that is what makes Richard Farnsworth’s final role (for which he was nominated for Best Actor) so powerful.

The inherent violence of biology was metastasizing within the actor’s body as he turned in arguably his greatest role. Farnsworth (who didn’t approve of violence or swearing, and who knew nothing about Lynch’s prior work when contacted about the part) acted in the film despite a diagnosis of terminal bone cancer. The two canes his character used were as much out of physical necessity as they were important to the story. A year after the film’s release, pain from the disease would lead Farnsworth to end his life with a gunshot at his ranch. Two years later, Lynch would go on to release Mulholland Drive, the film that longtime detractor Roger Ebert claimed Lynch had been working toward his whole career. To reach that surrealist Promised Land, Lynch did not choose to make his Disney movie into an artistic detour—instead, his vision trekked directly through the lost Iowan highways of The Straight Story.