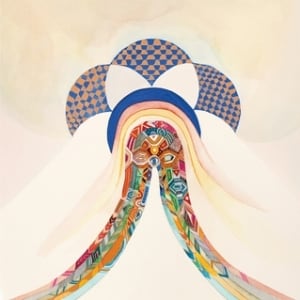 [xrr rating=3.75/5]Experimental music is often a needlessly clinical endeavor, haphazard in its renouncement of conventional musical style and structure. Such is not the case for Kaitlyn Aurelia Smith’s synth-driven experiments on Euclid, a minimalist take on modern electropop. The album slowly picks away at the characteristics of the genre with fragmented synthesizers, at once spacey and pastoral, that paint melodies with a slow brushstroke. As far as experimental music goes, few artists can match Smith’s penchant for clean and calming sounds, a rarity for the genre, which results in a refreshing, original package from an artist unafraid to embrace the quirks of contemporary pop.

Euclid is divided into two parts, the first a dense set of glitchy, atmospheric pop and the second an ambient electronic suite devoid of vocals and tight focus. “Careen” starts the album off in a summery, primordial state as flutes, light synths and sparse percussive elements slowly unify in rhythm, forming the genesis of Smith’s singular, sunny world. Fluttering, repetitive patterns mimic minimalist masters Steve Reich and Philip Glass while Smith’s vocals, dense with heady effects, align with more accessible experimental pop artists like Yeasayer. The layered melodies are evocative, lush and generative, especially on the following track, “Wide Awake”, which takes the organic psychedelia of Animal Collective circa-Feels and Strawberry Jam and pushes it a level further into abstract pop. “Sundry” indulges in a wacky pulsating beat that gives way to reverb-soaked humming, eventually turning back around and blending tinkling mallets, throbbing bass and a monotone vocal phrase. It’s expansive and disparate but also living, constantly shifting into new directions, never static or rigid. The first six tracks on Euclid approximate what it might sound like for conventional indie synthpop to be chopped and screwed, remixed by Panda Bear, Dntel or both, then sunbaked for an entire week.

This first half ends with the percussive and dreamy “Escapade”, a feverishly rhythmic piece that ungracefully leads into the far more understated second half. Euclid’s “Labyrinth” suite, separated into 12 pieces, is an immaculately produced collection of short, subtle ambient tunes that clash with the mild chaos of “Careen” and “Wide Awake”. The main undercurrent of the pieces are their electronic blips and quietly swelling synth strings, elements that slowly fill the sonic space in a humming, melodic crescendo (“Labyrinth IV” acts as one of the dynamic peaks). That slow, soothing build is in some ways at odds with the first six tracks on the album, songs that engage in sudden shifts in tone, melody and rhythm that threaten to overshadow the latter half of the record just by virtue of being much more active. “Labyrinth” is the cool, late night companion to Euclid’s daylit first half, but without a transition between them, the effect is abrupt. As a result, the two sections struggle to enhance each other the way they were probably meant to.

Smith’s work is still stunning, providing a novel perspective on typical synthpop sounds. Euclid is a tremendously relaxing listen that rewards close attention but doesn’t demand it. Smith brings versatility to her musical experiments, imbuing the ambling compositions with a more traditional sensibility that allows for a broader audience. Euclid is ambient music for the pop fan and the experimental skeptic, but it’s no less worthwhile to those of us who enjoy deviation from convention. Perhaps experimental music isn’t meant to be universally enjoyed, but Smith certainly makes it hard to dislike.