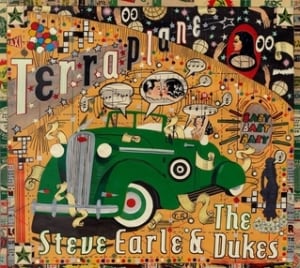 Steve Earle is used to dealing with ghosts. From Townes van Zandt on Townes to Hank Williams in his novel I’ll Never Get Out of This World Alive, spirits regularly float up in his repertoire. On Terraplane, the specter of Robert Johnson looms heavily, though the record’s tone indicates the bluesman’s shadow is hosting a raucous party rather than haunting a more sinister affair. With its namesake an antique motor vehicle Johnson immortalized in song, the record gives you that restless feeling of hitting the road with a devil-may-care attitude.

Blues motifs are rampant throughout the album in lyrics of love and sex, virtue and vice, damnation and redemption. Its songs evoke the kudzu and Spanish moss-laden swamps of the deep South, and several cuts would have been at home on the True Detective soundtrack. There is a palpable humidity rising from the tracks, particularly with scorching opener “Baby Baby Baby (Baby).” It stomps along as though decades-old amps project the ragged notes from a honkytonk in the bayou’s depths. The torrid guitar chugs sound like corroded strings played with a rusty nail, and Earle emits a boozy snarl above them. Blasts of a rail yard harmonica cut through the bluesy riffs, Earle foaming at the mouth like a lecher on the prowl to get his ashes hauled. That lustful sentiment continues on “You’re the Best Lover That I Ever Had,” its electric roiling an undercurrent to the acoustic plucking at the forefront.

The album peaks on its third track, “The Tennessee Kid,” which opens with Earle grunting like a cave-beast awoken from his slumber. As the music rolls in and builds momentum, his spoken word vocal gives way to a barrage of biblical imagery telling the story of Old Scratch coming to claim a doomed soul. The most overt homage to Johnson, it name checks the fabled songwriter and his mythical Faustian deal. Earle injects a bit of Tom Waits’ delivery from “Step Right Up” in his recitation of Lucifer’s sales pitch, while distorted slide guitar squalls and a Velvet Underground-esque fiddle swirl about. “Hey hey hey hey/ The balance comes due someday,” Earle sings, alternately as the demanding devil and the kid who, come song’s end, accepts his damnable fate.

Earle and the Dukes next offer mirror takes on the single life. “Ain’t Nobody’s Daddy Now” is a slice of violin whimsy, the protagonist reveling in his untethered existence. It’s contrasted with the winsome “Better Off Alone,” which desperately proclaims a preference for the single life, but he doth protest too much. The tune plods along, mimicking the character’s own foot-dragging, and by the end of the song the speaker admits his failings: “I just can’t go through that again/ ‘Cause it almost killed me then/ I guess I should have known/ I’m better off alone.”

The fiery energy rebounds with “The Usual Time,” a juke joint rattle in which Earle assumes the role of Howlin’ Wolf’s backdoor man in search of a late night carnal liaison. “Go Go Boots Are Back” offers nothing deeper than what the title implies, though the crunchy and crackling guitars and rhythm bear strong similarity to last year’s “Protection” by Lucinda Williams. Giving a new spin to the theme of Hank Williams’ “Ramblin’ Man” is “Acquainted With the Wind,” featuring a start-stop rhythm. A rollicking ode to wanderlust, the banjo-guitar-fiddle interplay imparts the sensation of drifting along the highway toward an unknown destination. The deceptively simple duet “My Baby’s Just As Mean As Me” has a folksy quality, Earle and Eleanor Whitmore trading verses and perspectives on a toxic but loving, relationship. “I give as good as I get alright,” Whitmore sings above the lightly drifting, fiddle-led melody, the song feeling like a front porch singalong at sunset.

Closer “King of the Blues” ends the record on a suitably gritty note. Slow and heavily thumping, it’s as ominous as a hoodoo hex. Sibling to “The Tennessee Kid,” it finds Earle chronicling the birth of a bluesman-to-be, his arrival on the earth heralded as though he were a progeny of hell itself. Grumbling and foreboding, it’s an apt way to wrap a record so steeped in the Robert Johnson lineage.