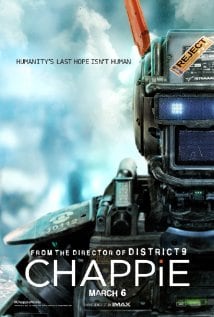 [xrr rating=2.75/5]District 9 opened some major doors for director Neill Blomkamp. His 2009 debut feature not only grossed seven times more than it cost to make, but it took advantage of the first-time expanded Oscar field to snag a Best Picture nomination. What’s more, the young director who has cited Sigourney Weaver’s Ripley as his all-time favorite character from his favorite movie was recently handed the keys to his favorite franchise. In fact, all the recent chatter about the announcement that Blomkamp will helm the new Alien movie may have distracted from the fact that he’s got a new film coming out right now.

Maybe that’s for the best. Despite some pulse-pounding action sequences, impressive special effects and an earnest motion-capture performance as the titular robot by Blomkamp-regular Sharlto Copley, Chappie will not last long in our collective consciousness. Much of that has to do with its clunky philosophizing on the nature of consciousness itself. Whereas District 9 offered up a believable alien apartheid allegory, and the less well-received Elysium went all-in with its class warfare and anti-immigration commentary, Chappie’s heavy-handed and well-worn take on the nature of self-awareness lands with a resounding thud.

Chappie is an amalgam of better movies. At its core, this is A.I. meets Robocop. Like District 9, Blomkamp sets this film in his hometown of Johannesburg, South Africa. Chappie’s sentience comes about after Deon (Dev Patel), creator of an effective robotic police force known as Scouts, achieves a technological breakthrough that can render his robots as blank slates. Plug in his new-fangled hard drive and the robo-cops are like babies seeing the world for the first time. His boss (Sigourney Weaver) won’t let him try it on an actual Scout because their insurance won’t cover the liability. And the whole time he has a rival co-worker (a mullet-sporting Hugh Jackman) breathing down his neck in hopes of getting his own invention, a prototypical mech warrior called “The Moose,” at the frontlines of Jo’burg’s rampant crime problem.

Deon steals the RPG-blasted remains of Scout 22—a unit that always manages to get blown to shit—in hopes of once and for all passing the Turing test. But on his way home, his van gets jacked by a local gang of ruffians (headed by Die Antwoord’s Ninja and Yo-Landi Visser, whose characters share their own stage names) who want to use Chappie to help steal the exorbitant sum they owe ripped badass Hippo (a dreadlocked Brandon Auret). The thing is, once Deon activates Chappie’s blank slate, the robot turns into an adorable little guy who needs to be taught English and manners and how to hold a gun like a gangsta. But Deon also teaches him to never shoot a person, though he will defy Asimov’s Three Laws of Robotics when he’s told that stabbing someone only “puts them to sleep.” It’s all meant to be a little too precious, and even a little racial when Ninja decks out Chappie in stereotypical bling.

The film is well shot, and the actors are game enough. As popcorn-flick eye-candy, you could do worse. But it’s hard to endure an increasingly whiny Chappie calling out for his Die Antwoord “mommy” and “daddy.” Yo-Landi gets maternal almost instantly, and even Ninja ends up taking a shine to innocent little Chappie way too quickly. Blomkamp has called this a spiritual movie, and that’s evidenced by Chappie (whose irreparably damaged hardware will only allow for five days’ worth of battery life) asking his “maker” why he was created only to inevitably die. And as the film’s finale echoes the crappy technological philosophy of Transcendence and even Avatar, the wheels come off the shiny, but rickety, vehicle for Blomkamp’s supposedly deep thoughts.