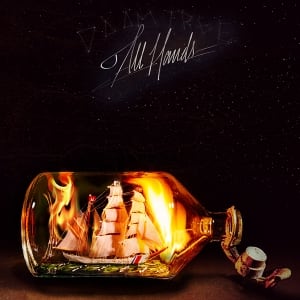 [xrr rating=3.25/5]All Hands, Minneapolis septet Doomtree’s third album, displays a hip-hop collective in the purest sense, boasting songs workshopped for maximum flow between members and unified production that maintains that pace across 13 tracks. Rappers trade off verses like relay racers, concerned not only with crafting their own rhymes, but setting up their comrades. Far more than other groups, Doomtree resemble a hydra, all independent heads joined by a core being. Just listen to opening track “Final Boss,” in which Sims, Dessa, P.O.S. and Mike Mictlan trade video game references so seamlessly that they sound like one person changing their voice for each verse.

“Final Boss” puts the production work on immediate display, and it only takes a few seconds to realize both how long ago the independent scene beat Kanye to stark noise and how radically Yeezus has affected things anyway. The pummeling, but unmistakably bouncy beats from All Kings are gone, replaced by a cavern of sound that leaves wide space between blackened basslines and howls of electronic wind, a minimal soundscape that retreats even further into moments so softly scored they border on a cappella. It’s a groove, albeit one that sounds as if it’s being made by some nightmarish future factory, an industrial grind straight out of the El-P playbook.

Lazerbeak, Paper Tiger and Cecil Otter fill the album with such sounds. “80 on 80” marches in on a military beat played on an oil drum, lending what is otherwise a lightweight track about amusing tour woes a deep unease, to the point that drifting through towns where only mainstream stuff like Bruno Mars can be heard on the radio takes on existential dread. “Beastface” recounts gambling dangers over stuttering, muted percussion, but occasional diversions into splashes of shimmering euphoria give the impression of a amusement park, as if the crew were in it for arcade tickets as much as a fat casino payout. Not everything swims around in this sonic molasses mind you; “Heavy Rescue” gives the listener an idea what a M83 remix of rap might sound like, a blissful collection of acoustic instruments, leap-into-the-stratos electronic hooks and wordless choral backup for extra oomph. Joy runs through even the darkest moments of the record, but it comes rushing to the forefront on this track.

Lyrically, the group largely dabbles in free-form rhymes, held together by goofy references for a host of nostalgic signifiers. A Ghostbusters namedrop here, a sly, esoteric nod to The Princess Bride there. The general flow is such that even some of the MCs’ more gripping segments get lost to the larger motion of each track. Exceptions can be found in standout tracks like “.38 Airweight,” in which each performer weaves another layer into a vision of casual gun violence that mixes the power plays of coastal turf wars with the proliferation of firearms out in middle states like Minnesota, where Bernie Goetz (the New Yorker who shot four black men on the subway in the ‘80s) is placed side by side with Charles Bronson, whose Death Wish films sensationalized and gloried the racist violence Goetz put into action. Album closer “Marathon” trades in decidedly less severe territory, being a self-congratulatory verbal jam à la A Tribe Called Quest’s “Scenario,” but it too boasts exceptional writing craft, especially in Mike’s intricate bars like “And you won’t know me by incisors or metacarpus/ Claim carcass, head on the wall, body starting the metamorphose,” a couplet that should collapse after a few words but is held aloft by his exceptional diction and verve.

The downside of this consistently pleasurable music is that its carefully honed pacing starts to work against it. The greatest pleasure of listening to hip-hop crews is generally sussing out the distinct personalities of each member, and how those personalities contrast and even conflict with each other while pushing a track forward. That unified Doomtree sound becomes a drawback when individuality takes a backseat to overall movement. That doesn’t mean that the rappers all sound the same: Mike’s thesaurus-abusing verses clearly stand apart from Sims’ melodicism and Dessa’s gift for sudden crystallizations of fist-pumping anthems. There’s a great deal of virtuosity on display here, but its idiosyncrasies are eroded through repetition, and it’s a shame that that such an ambitious album ultimately works best as ambient noise, not disruptive enough to disturb an afternoon of inattentive listening while performing other tasks.