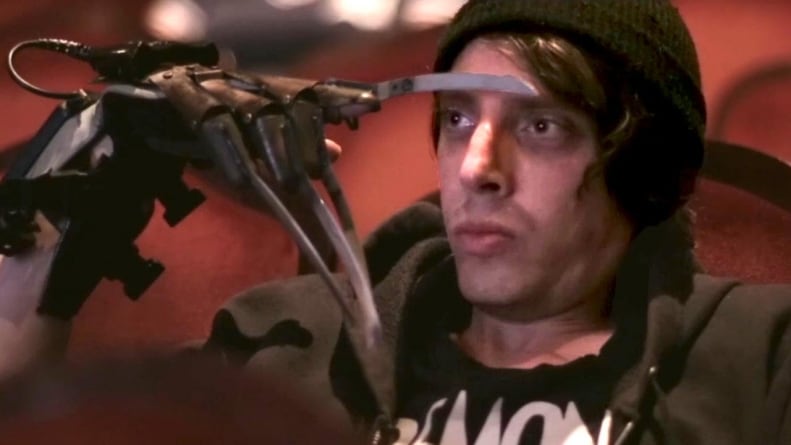 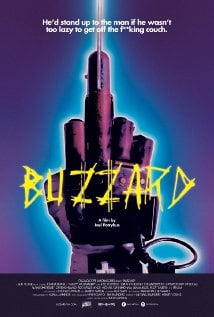 Joshua Burge, with his long, expressive face, was born to play Nosferatu. But in director Joel Potrykus’ Buzzard, he plays an office temp. We meet Marty Jackitansky (Burge) in the middle of a three-hour break he’s taking from his job at First Federal Bank. He’s playing video games, but when he can’t get his Nintendo Power Glove to cooperate, he reacts to this failing extension of his body the only way he knows how: he destroys it.

Burge’s face is mostly off-camera in this sequence, and when we finally see it, it oozes defiance but also a sadness, uncomfortable being watched. Marty is closing a checking account at another branch of First Federal, and as he spells out his name to the bank clerk and explains he’s not Polish but White Russian, Burge’s eyes tighten just a little bit. It’s a subtle and hilarious gesture, but it doesn’t make this unrepentant cheater likable. Here’s a smug slacker trying to game the system, opening another checking account immediately after closing the first one so he can get the $50 promotional bonus. Yet Burge makes him watchable no matter how much you want to look away.

This is first of many scams that our long-faced loser devises to support his meager existence on Hot Pockets, frozen pizza and Doritos sandwiches and video games. His big eyes and hang-dog face suggest a vampire, which suits what he does become: a monster.

The opening theme to Buzzard recalls Beavis and Butthead; Marty and his co-worker Derek (Potrykus) are a twenty-something Beavis and Butthead trying to navigate the corporate world while still holding on their adolescence. The director’s deadpan camera unflinchingly observes Marty’s increasingly bold scams, aggressive even at play in a game where he nearly chokes Derek, feeding him Bugles from a treadmill.

The movie is more uncomfortable than funny as Marty goes from scam artist to sociopath, but even then there are moments of relative calm, as when he uses the proceeds from a check scam to stay at a fancy hotel and order a $20 plate of spaghetti and meatballs. This is one of several scenes in which the director holds on a shot of Marty for much longer than is comfortable, which in this case means we get to watch him eat a whole plate of spaghetti and meatballs, the camera in awe of an appetite that at this point almost passes for childlike innocence.

Burge tells interviewers that he didn’t want to make Marty likable, but he did want audiences to root for him. I never did, but kudos to the actor for not trying to turn this character into a charming badass. Buzzard is the third part of Potrykus’Animal trilogy, after the short “Coyote” and feature Ape. I haven’t seen the others, all of which star Burge, but I wonder if this cycle comes off like a shorter-term, grittier Boyhood. Coming of age movies are generally about finding your voice, but this film of troubled youth is a terrifying variation: it’s about losing yourself. I didn’t enjoy watching Buzzard, but I admire it as a character study of a tragic asshole.