I know that you’re often painted as an out-of-touch Hamptonite who would sooner milk the sweet tears of orphans for salted chocolate chip cookies than use vanilla that doesn’t meet your high standards, but I think this is unfair. You do understand the common wo/man, and your latest cookbook, Make It Ahead is definitive proof. As you state in the introduction, “we all have the same dilemma—we want to entertain with ease.” If by entertaining you mean throwing something warm onto plates after 9 hours at work plus commute to be shoveled into our mouths while yesterday’s “@Midnight” plays in the background, totes! I love entertaining with ease.

Your philosophy that many flavors, such as those in soups, stews and sauces, actually taste better after a few days in the fridge, is sound. However, when you describe your Slow-Roasted Sliced Pork and Winter Slaw being prepped and stored in half a dozen baggies until the big dinnertime reveal, I get a little bit of chicken-or-the-egg syndrome. Like, when did you get the time to julienne and blanche and whisk all of those little pieces in the first place? If I had time to do all of that for dinner tomorrow, I’d kind of just feed myself well tonight. Screw tomorrow night, Tabitha. She might not even BE here. 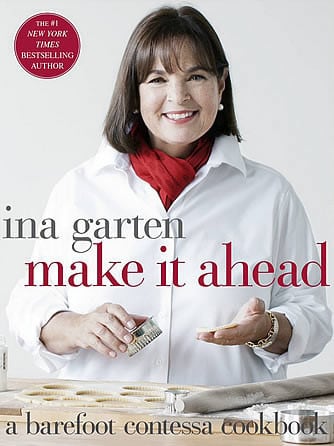 But I digress. We are, after all, talking about entertaining. Take this conundrum, which kicks off “Cocktails,” your first section:

Every year, Jeffrey and I spend New Year’s Eve in Paris with friends. We hire a taxi to drive us all over the city at night to see the sights lit up for the holidays. We take a bottle of Champagne to drink on the steps of Sacre Coeur with the Eiffel Tower sparkling like a diamond in the background. We walk across the Seine on the Pont de Arts and marvel at the view of the Louvre museum all illuminated. And finally, we stop at the Hemingway Bar at the Ritz for a delicious cocktail to warm us up. Then at around 11pm, we come home for an elegant late-night supper. It sounds wonderful and romantic, doesn’t it?

But oops! There’s a problem! Of course, I want to cook a memorable dinner on New Year’s Eve but how can I do that when I’ve been out carousing with Jeffrey and our friends all night!?

GIRL! I have been there! Well, not THERE there. Replace “Paris” with “one-bedroom apartment” and “friends” with cats, and marvel at the Target pack of hats and crackers I bought to have some semblance of a party but only used as Instagram props after my boyfriend fell asleep before 10:00 after storming off to bed because we had a fight over him being too tired to stay up and watch “fucking Ryan Seacrest’s balls drop.” Anyway, after hate-refreshing Facebook all night, I was ravenous.

In the spirit of new traditions, I recently tried one of your make-ahead recipes: Pear and Parsnip Gratin. I procured the freshest parsnips from the Portland Farmer’s Market, from a girl who was wearing the widest eyeglass frames and the most earnest of fingerless mittens. I turned my nose up at the market’s Anjou pear basket and went to a second store, where your specified Boscs were waiting. I bought the extra-large eggs for extra cash. I fitted my food mill to the coarsest blade, as per your specifications and mushed all of my expensive, long-simmering ingredients through it.

My reason for writing is, did I make a mistake in leap-frogging over cocktails into vegetables? Because I would need at least two gallons worth of jalapeño margaritas to choke down an extra bite of that stringy, mushy, watery goop-fest. Or was I supposed to make it ahead, forget about it, and go out for a better dinner somewhere—anywhere—else? I simply feel as though I missed something, and I do hope that you can help me problem-solve this ruined party. And by party, I mean celebrating the fact that “Empire” was going to be on in two hours. Fortunately, I always have plenty of DiGiorno. I make it ahead.