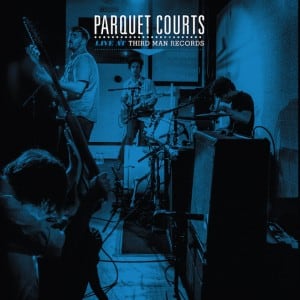 [xrr rating=3.5/5]Leave it to Jack White to make a live album more than just a live album. His Live at Third Man series has captured everyone from Mudhoney to Conan O’Brien at his Nashville headquarters, directly transmitting shows from amp to acetate. What would ordinarily just be a souvenir for those in attendance gains added significance under White’s oversight. Whether it’s Third Man’s attention to packaging, its potential for creating a collector’s item or the fact that the band performing feels the need to put in a little more under White’s long shadow, these releases come across less like a stop-gap between albums and more like a true preservation of a moment in time.

When Parquet Courts pulled into White’s tiny Blue Room in June of 2014, their excellent Sunbathing Animal was only a few days old. They burned through almost all of that record and not much more, and it seems like the band intended to display a new identity. Sure, the reference points they’ve been associated with are still there, but they’ve honed their own sound, and convey confidence that is far more evident live than it is in the studio. Having kinda-sorta released two albums last year (Content Nausea under their Parkay Quartz pseudonym didn’t feature the whole band), it’s not that there was a need to answer an untapped demand. But like most of White’s releases, this one feels special having captured the band at the right time at the right place.

Parquet Courts, as a live band, aren’t the slackers they want you to believe. In fact, they’re quite the tight unit. Though the hooks are ragged and scuzzy, they’re still melodic and controlled, and there’s tangibility to their sound. The band is at its best, and certainly its most distinct, the slower they play. With its chords shaped by syncopated single notes and bends, “Dear Ramona” infuses some of their Texas roots behind Austin Brown’s apathetic vocals. It isn’t easy to keep a tempo as laid back as “Instant Disassembly,” but with its stoned riff repeating with mechanical precision, it leaves you dazed in the best possible way. All of this points to the band’s most underrated element, which is its rhythm section of drummer Max Savage and bassist Sean Yeaton. Parquet Courts is never better than when they lock into a groove, and there’s no more solid example of this than the swing Savage and Yeaton drive during “Bodies Made Of.”

For as good as Parquet Courts is when they play relaxed, they don’t lose much when they play fast. At nearly 10 minutes, “Raw Milk” is much longer than its studio counterpart, attacking newfound complexity by bringing in noise, freeform improvisation and a blues-y stomp while abandoning traditional song structure. “Descend (The Way),” the lone non-Sunbathing Animal track here, offers thrashing punk without hiding behind distortion or screams and proves you can jam out a hardcore song and stay completely on the rails. Still, it’s tracks like “Always Back in Town” or the brutal “Sunbathing Animal” that demonstrate Parquet Courts as a band that sounds whole. This is especially true during the latter, which features a melodic dual guitar solo that shows just how locked in these guys are.

Having been named by Spin as its band of the year in 2014, Parquet Courts now have quite a few documents to show for the time. It will be Sunbathing Animal that rightfully goes down as the quintessential chronicle, but Live at Third Man Records should not be dismissed as just a live album, just as Parquet Courts shouldn’t be dismissed as lazy. For a band with a stigma of not giving a shit, they give it everything they have (note Andrew Savage’s impressive display of breath control during “Ducking & Dodging”), capturing a performance at their absolute peak. And you didn’t have to be there to recognize it.