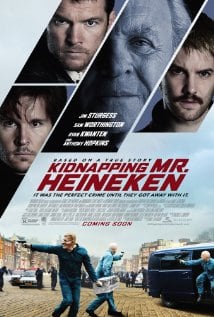 So Kidnapping Mr. Heineken would have us believe, and since the line is spoken by the never-less-than-thoroughly-convincing Anthony Hopkins, there is the temptation to be roped into it. Hopkins, who’s playing billionaire beer magnate and kidnapper-target Freddy Heineken, delivers this aphorism twice in the film, and both times it’s meant to reflect directly on the desperate choices made by the working class Dutch boys who have snatched him up and shackled him. But there are a few things very wrong with the movie’s decision to make Heineken’s sage advice its thematic crux.

The film is based on a true story. Of course, there really was a Freddy Heineken, creator of the beer brand we all know, and in 1983 he really was kidnapped by some hardscrabble Dutch chaps, Cor van Hout and Willem Holleeder, played in the movie by the conspicuously British chaps Jim Sturgess and Sam Worthington. According to the film’s post-script, relayed in print over photographs of the actual criminals, Van Hout and Holleeder eventually came out on top. They were arrested for the kidnapping, though only after they received the money, not all of which was recovered. They served prison sentences, but went on to become what the post-script refers to as “Godfathers” of the Dutch underworld. To its detriment, Kidnapping Mr. Heineken doesn’t follow their story past the end of the central caper (if we saw their criminal lives play out, this movie may have managed to eke out a good story), but contrary to the film’s repeated message, Van Hout and Holleeder obviously did manage to wind up with both friends and money.

The movie suffers for hinting at the greater story it could have told, but it doesn’t fare much better in terms of what actually happens onscreen. You can see its influences plainly, as well as the probable reasons for choosing them, but it does such a poor job at imitation of the style and tone of other films that the story it’s supposed to be telling gets lost. This is one part attempt at aping Guy Ritchie’s funny-kinetic crime capers, one part attempt at aping Ken Loach’s lower-class realism. It veers between fast-paced action sequences (the criminals bust up a squatter’s camp, the criminals rob a bank, the criminals snatch up Freddy Heineken) that are indistinguishably filmed with frenetic camerawork and quick cuts, and what are intended to be slow-boil scenes of the criminals attempting to deal with the stresses of their working-class lives, wondering if their plan is ever going to pay off. Sturgess and Worthington, perhaps with little help from their director, fail to make Van Hout or Holleeder distinguishable even from one another; they’re vague approximations of greasy, shambling Cockney lads, which is a poor decision on many counts. The clumsiness of the frequent transitions between inept action and tone-deaf social shading is underscored by the fact that we can’t even tell where the story is set: as mentioned, all of the actors are British, and they speak with British accents, and since there are basically no locale signifiers, the fact that everything is supposed to be taking place in Amsterdam and not London is a loose fact of which you have to constantly remind yourself.

Kidnapping Mr. Heineken is a chore to watch, neither fun and funny nor realistic and insightful, though it clearly aims for all four. Hopkins manages the still-impressive feat of crafting a finely-tuned performance amid what was almost definitely no clear instruction from director Daniel Alfredson, but that’s not too curious, because Anthony Hopkins is Anthony Hopkins for a reason. The actor finds moments of both scariness and aching pathos as he attempts to examine the effect on an intelligent but aging man of being chained in a tiny room for weeks. Alfredson, meanwhile, seems not to have thought through anything beyond his influences. He is the older brother of Tomas Alfredson, who made the masterpiece Let the Right One In and the excellent Tinker Tailor Soldier Spy, and it’s clear Alfredson the elder would have done well to eschew his Ritchie/Loach aspirations and keep the aping in the family.