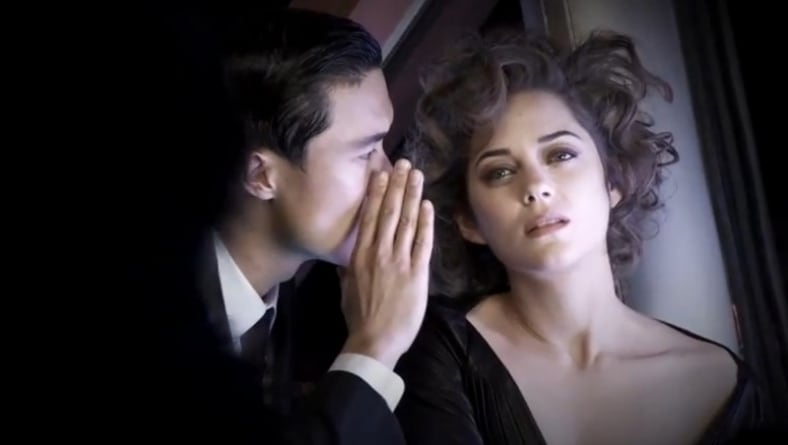 Lynch made a handful of short videos during this period that are more stylized than the home video look he’s espoused, but the results were still mixed.

You wouldn’t think that a straightforward, almost neorealist documentary about lithographic printing would be the subject of David Lynch’s strongest recent work. The auteur’s mature style is so singular that his name has become an adjective. But in recent years, maintaining that style has led him to repetition and even self-parody. He also abandoned the medium that fueled his best work. “Film is dead,” he wrote in 2007, “I’m shooting in digital video and I love it.” This, coming from a man who was once so dedicated to celluloid that he went to one of the great cinematographers, Freddie Francis, to shoot his first Hollywood film, The Elephant Man.

Inland Empire (2006), Lynch’s most recent feature film to date, was his first shot on commercial grade video, and I can’t fathom how anyone could find its muddy look more dreamlike than the rich and varied monochromatic tones of Eraserhead. But a short produced around the same time made a better case for video as dreamlike. At just over seven minutes, “Boat” is Lynch’s lo-fi aesthetic in miniature. Lynch took advantage of the new medium’s limitations better here than in any other of his video projects. Make no mistake, the image quality is lousy, but the camera’s inability to capture reality really does make the images dreamlike. A breathy female narrator dramatically gives a play-by-play of a banal outing in a small motorboat captained by Lynch. He drives the vessel into a blinding brightness, images of sunlight terribly overexposed. It’s a cheap but unsettling effect, almost undone by an overdramatic narrator that makes this sound like an overwrought teen’s writing project.

Lynch has fared better with short films commissioned by various film festivals. He made “Absurda” for Cannes in 2007, and visually it’s a few steps above commercial video. It has the look and sound design of old Lynch, but the short’s only dialogue comes from dim young people watching the film within the film. More successful is “Blue Green,” made the same year. An elfin child skips merrily in an abandoned factory; a disheveled woman in a nightgown wanders the streets while a baby can be heard screaming in the distance. If this three-minute short works better than many of Lynch’s others of the period, it‘s because there’s no dialogue. The director establishes a creepy lo-fi mood with commercial grade video tools (and probably more sophisticated sound mixing equipment).

Lynch made a handful of short black and white videos during this period that are more stylized than the home video look he’s espoused, but the results were still mixed. The 10-minute loop “Industrial Soundscape” (2008) is moody but monotonous. The similarly shot “Bug Crawls” is an improvement, reveling in the kind of (aesthetically) crude humor that he showed in his comic strip, The Angriest Dog in the World. A poorly animated insect crawls on a small house-like figure, flops over and dies; a mysterious flashing buzz comes from behind a doorway that you can only partially peer into. It’s a dark joke without much of a punchline except a “mystery” that has now lost its ability to surprise.

Lynch seemed to be flailing artistically, but he still had good work ahead of him. The 50-second “Dream #7” made for the anthology 42 One Dream Rush, is a stylish animated dream that’s more than just banalities dressed up in gauze and good sound design. A hovering egg becomes truly ominous as it hatches and transforms with a startling bass-heavy shudder.

“Ariana Delawari” is Lynch’s uninspired promotional trailer for the singer-songwriter’s 2010 album, Lion of Panjshir. The director narrates in a distant voice that sounds as if a mic was held up to a telephone receiver. The video consists of a series of setups filmed at the Black Lodge, a favorite “Twin Peaks” location. Lynch keeps the camera steady when he shoots the singer’s ballads, but for anything with a beat, he shakes up the camera distractingly and obviously, and it doesn’t do Delawari any favors.

Lynch’s increasingly predictable aesthetic reaches a nadir with the 12-minute “Ballerina.” If you shoot anything in a mist, of course it will look like a dream. Lynch can dream up unforgettable surreal images in focus, but this short takes shortcuts, opening with its subject out of focus, dancing in a red dress and gradually coming into focus only to be obscured by clouds, scored to eerie synthesizer music. This is Lynch as pure shtick, a method easily parodied by anyone with dry ice and a jar of Vaseline to smear on their lens. He could at least have shot bugs like this.

Then he sold out to Dior. “Lady Blue Shanghai” (2010) stars a beautiful actress (Marion Cotillard) and was made with a budget and something like a script. But its real star is a luxury handbag, its director an artist turned mercenary. The subject matter requires Lynch to achieve some level of visual class, yet that goddamned shaky video camera undoes the air of sophistication that Dior presumably hired him for. Is this purse-porn a nightmare of commercialism, a subversive indictment of the fashion industry? Perhaps, but it’s also a rehash of themes.

The Interpol music video “I Touch a Red Button” (2011) is another mixed bag. Moiré patterns seem to indicate that he’s using digital video to shoot a computer screen animation of a long-nosed creature repeatedly touching a red button. It’s a study of obsession, but obsession diminished by his new signature, the shaky camera. Like so much of his video work, it makes you wonder what Lynch could have accomplished with a cleaner image. Here he’s just shaking the camera on a cartoon face or zooming in and out on red balls in time to the music. It’s a democratic medium, but is it art?

Almost miraculously, Lynch went on to make good video art, though he still careens wildly from self-indulgence to real invention. The minute-long black and white short “The 3 Rs,” a trailer for the 2011 Vienna International Film Festival, recalls the early Lynch short, “The Alphabet.” It’s sort of a counting lesson, but it’s signature Lynch without seeming like a retread. A stern schoolmistress voice asks, “Pete has how many rocks?” Pete turns out to be a middle-aged man I wouldn’t let inside the classroom, but for the record, it’s three. An Asian woman stands on a ladder to chalk in the number of rocks on a blackboard, but when she turns to the camera, she wears the expression of a kidnap victim caught disobeying her captors. Who knows how Lynch directed this micro-performance, but it works. The elements of childhood are here: school, the rubber ducky and basic arithmetic, but they blend into a nightmarish montage, Pete hammering the ground to the sound of squeals. This is apparently what Lynch thinks of school and its cruel insistence on rote learning. It’s one of his best recent films, and not coincidentally, the quality of his digital video use has come a long way from his early video works.

Lynch released an album of music in 2011, and “Crazy Clown Time” (2012) is a music video for its title track. If lyrics like, “Danny spit on Suzy” make you think he has a problem with women, wait till you see the literal reenactment. The video feels like Harmony Korine as much as Lynch, as if Lynch had taken on the persona of one of the bad boys he inspired. It’s crude and obvious but not unfunny, though you can’t shake the feeling that this is what it would look like if a bunch of dudebros got together and said, “Hey man, I got a camcorder—let’s tell our girlfriends we’re making a David Lynch video, maybe they’ll take off their shirts!” Even its cast seems disturbed by the proceedings; when Danny pours beer on Suzy for the third time, he has a look on his face that seems to say, “Man this is so degrading.”

Which makes Lynch’s most recent short film a shock, and not in the typical Lynchian manner. “Idem Paris” is seemingly the least Lynchian of his 21st century work. Shot in black-and-white video, the camera lingers on the repetitive mechanics of a lithographic printing press. But it’s the sound of that press that makes this a David Lynch film, the factory din recalling Eraserhead, the repetition for once truly hypnotic, and real. This naturalistic work may be the best distillation of what Lynch does at his best: he makes you see and hear that there’s something strange about even the most ordinary things. The fact that he accomplishes this without any of his signature tics of deliberate obfuscation and studied wackiness is an encouraging sign that he can still tell a story after all. Which Lynch will we see in the upcoming reboot of “Twin Peaks”—the Lynchian cliché, or something new and really mysterious?