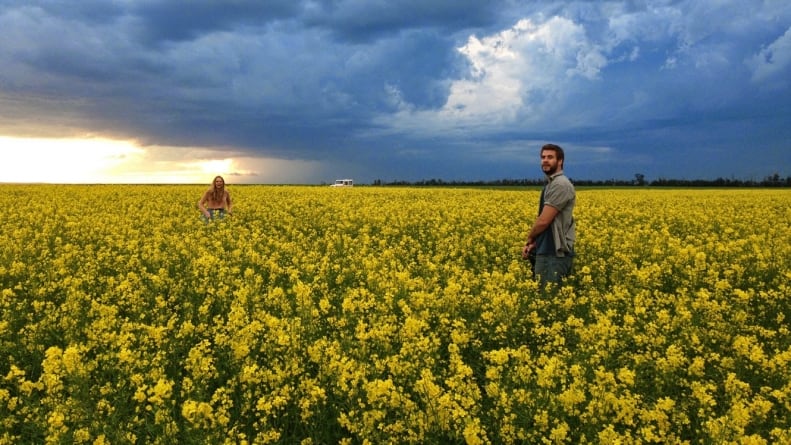 Plunking down a young star who’s barely more than a pretty face among a group of veterans seems like a tactic designed to mask his ineptness while milking the most from his fame.

It’s become the standard deal. Young stud actor (Liam Hemsworth, in this case), not yet risen to the level of A-list star, takes a starring role in a medium-budget thriller in hopes that it will become a surprise hit and open him up for consideration in summer blockbusters or Christmas prestige movies. He acts his brains out to make his performance seem gritty, but also because he is invariably surrounded by an intimidating cadre of grizzled old pros who can deliver memorable performances while either chewing scenery or sleepwalking through their roles, a decision each seems to have made based on which came more easily. In Cut Bank, the list of old pros is formidable: John Malkovich and Billy Bob Thornton going the sleepy-bored route, Oliver Platt and Bruce Dern hamming it up. Michael Stuhlbarg is the only pro of the group who’s put any effort into his performance, which is frustrating because he’s been given the same boilerplate material to work with as the rest of them. The formula of plunking down a young star who’s barely more than a pretty face among a group of seasoned veterans seems like a tactic designed to mask the star’s ineptness while milking the most from his fame. Meanwhile all the supporting talent seems to be around just to provide a distraction from the ineptness of the film itself.

Cut Bank can be described in such stark Hollywood-lingo terms because it’s little more than a pastiche of thin ideas and vague gestures in the direction of the films it wants to imitate. It’s the next in a receding line of bad films that follow the same formula for would-be success: Abduction, Lucky Number Slevin, Man on a Ledge. The slumming talent can be fun to watch, but eventually you have a choice to make. Do you use them to distract you from the inept plot or the wooden young star? Some movies are so silly you can’t have both.

Cut Bank’s plot tries to stay focused on Dwayne (Hemsworth), an improbably matinee idol-looking mechanic who inadvertently films the murder of a mailman (Dern) while making a would-be tourism video in a Montana flower field. Dwayne turns the tape in to the local sheriff (Malkovich) after showing it to his girlfriend’s taciturn father (Thornton), and soon discovers, no less improbably, that his good deed will land him a sizable reward from the Federal government, for providing evidence of the murder of one of its employees. However, when the mailman was killed, his entire truck full of packages went undelivered, which left a backwoods sociopath named Milton (Stuhlbarg) without a parcel he was anxiously expecting. Milton conducts an investigation into the matter using brutal tactics and a few degrees more zeal than does the sheriff (Malkovich, unlike Stuhlbarg, isn’t an actor particularly blessed with the ability to convey urgency), and quickly unearths the scheme Dwayne and the mailman concocted in hopes of splitting the postal service’s payout.

The conceit around which the plot turns—that two dimwitted Montana guys could actually trick the Feds into promising them a huge amount of money—is so specious that it may go a long way toward explaining why the only actors in the movie evincing any effort are Hemsworth and Stuhlbarg. They play the only characters given any reason to care about anything (money and a missing package, respectively) but their reasons for caring are so ridiculous (a hare-brained scheme, a psychopathic obsession with a piece of mail) that every other character could have justifiably laughed them off and gone on with their lives if it weren’t for the murder mystery they were obliged to play out.

The movie is well paced and framed by Mark Shakman, who’s directed a lot of TV. Not surprisingly for a veteran of a shorter-form medium with built-in interruptions, Shakman seems to think that keeping the momentum going with pulsing music and dramatic angles will be enough to make his silly story memorable. But good pacing without anything gripping to follow becomes boring pretty quickly. Cut Bank isn’t anything more than the Coen brothers knockoff it resembles, replete with Coen veterans (Stuhlbarg, Malkovich, Thornton) but lacking the directors’ dry, mean-spirited wit. The closest this film comes to landing a much-needed joke comes unintentionally, when Platt’s Washington, DC postmaster arrives in town and introduces himself by casually cursing a blue streak, to the surprise of the gee-gosh rural Montana folk, who seem to have never heard a “fuck” in their life. Malkovich’s sheriff, in a line reading we’re not supposed to interpret as sarcastic, turns to his secretary and exclaims, “Did he just take the Lord’s name?” If a film is that funny, who needs drama?