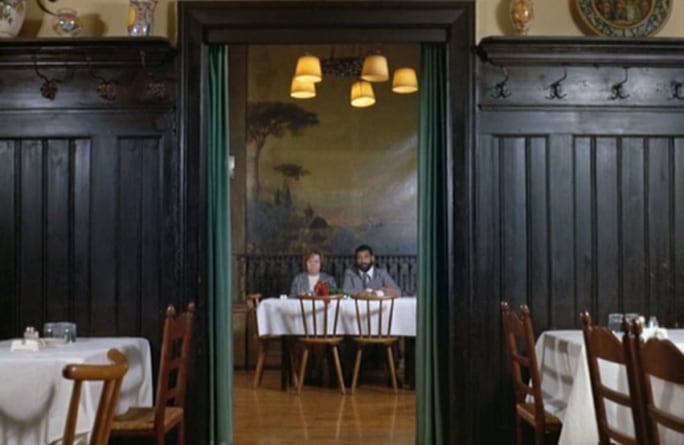 Fassbinder’s 1974 masterpiece explores not only the racial strains that pulled at Germany, but what happens to any relationship that challenges what is considered the norm within any society.

An older German woman takes refuge from the rain in a bar. It’s Munich, sometime in the ‘70s, and the establishment is one that Arabic men frequent. They stare at the woman as she orders a Coca-Cola. Someone dares one of the men to ask her to dance, a Moroccan man 30 years her junior. A short time later, they leave the bar and fall into bed together.

This scene begins Ali: Fear Eats the Soul, Rainer Werner Fassbinder’s 1974 masterpiece that explores not only the racial strains that pulled at Germany at the time, but what happens to any relationship that challenges what is considered the norm within any society. The older woman, Emmi (Brigitte Mira), is a widow who lives in an unassuming apartment and works as a cleaner. She has three grown children and little else. The man, Ali (El Hedi ben Salem) is a mechanic who shares a room with five other immigrants. Ali isn’t even his real name (it’s El Hedi ben Salem M’Barek Mohammed Mustapha). He only goes by Ali since the Germans struggle otherwise.

Fear Eats the Soul was shot quickly, in a period where Fassbinder became enamored with the films of Douglas Sirk, a German director who emigrated to the United States and is best remembered for his 1950s melodramas such as Imitation of Life, Written on the Wind and All That Heaven Allows. It is the latter film from which Fassbinder drew the most for Fear Eats the Soul, it being the story of a widower (Jane Wyman) who falls in love with her younger gardener (Rock Hudson), much to the chagrin of her children and her friends. 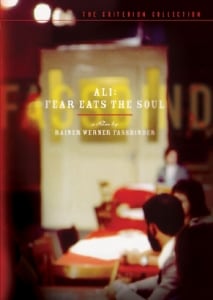 However, Fassbinder didn’t create a straight melodrama in Fear Eats the Soul. There are no big crescendos of wild emoting. This is the type of film that smolders, that peers around the corners and simply observes as the love between Ali and Emmi grows. While they may not share the same age or culture, both exist outside the margins of contemporary German society. They make one another feel alive and soon they marry. Unfortunately, not many other people can share in that happiness.

Ali is subject to vicious stereotyping from Emmi’s family, neighbors and co-workers. Many of their vituperative comments resonate with what is said today about Mexicans in the United States; Emmi’s friends claim that foreign workers are filthy, lazy and care only about sex. Despite Emmi’s protestations, she hears nothing but bad things about Ali and people just like him.

Soon enough, Emmi is also shut out of society. The grocer across the street will no longer sell to her, her co-workers shun her during lunch and her neighbors call the cops on her when Ali invites some Middle Eastern friends over to play cards. Her own children react violently when she announces the marriage, her eldest son expressing his rage by kicking in her television set. This scene may be the most explicit nod to Sirk; Wyman’s oldest son in All That Heaven Allows buys her a television to fill up the empty space in her life that he believes has driven her into Hudson’s arms.

It is important to note that while many of the other characters in the film violently disapprove of the relationship, Fassbinder makes the wise decision to include some people who don’t denounce Ali and Emmi. According to film scholar Chris Fujiwara, these characters (the grocer’s wife, the landlord’s son and the owner of the bar) “effect a transition, or sliding-off in our sympathies, from the couple towards the outsiders, preparing us to see even the film’s racists as redeemable” because when the pressure becomes so great that Emmi and Ali leave Munich and go on an extended holiday. When they return, things have changed. However, upon their arrival, the grocer (fearing losing business to a big marker) invites Emmi in, her son asks for her help with daycare, her neighbors want her storage space and her co-workers draw her into a wage discussion (while excluding a new worker from Herzegovina).

With Emmi back in the good graces of her coterie, Ali begins to long for his Arab friends. He begs Emmi to make him couscous but she demurs. He objects when she shows him off to her friends, allowing them to feel his muscles. Emmi’s contentment breeds his discontent and soon he finds solace in the arms of a bartender, an affair filled with sadness rather than passion. However, in a rare move for a Fassbinder film, Emmi and Ali are left with a glimmer of hope. They just might make it after all, despite all the odds being against them.

The themes in Fear Eats the Soul are certainly ones its director could identify with, being a homosexual in a milieu that did not tolerate that. El Hedi ben Salem not only appeared in many of his films, but was also his lover. Both struggled with alcohol and drugs and Salem was often violent. When the relationship disintegrated in 1974, Salem got intoxicated and stabbed three people in Berlin. Fassbinder helped Salem flee Germany. However, he was apprehended in France where he hung himself in prison in 1977. Fassbinder wouldn’t learn of Salem’s suicide until 1982, shortly before his own demise from a drug overdose.

Fassbinder supposedly cried the entire time he drove Salem from Germany to France. He dedicated his final film, Querelle, to Salem. But Ali: Fear Eats the Soul is a more fitting memorial to him, an unlikely valentine to love and unconventional relationships from one of the cinema’s most cynical auteurs.