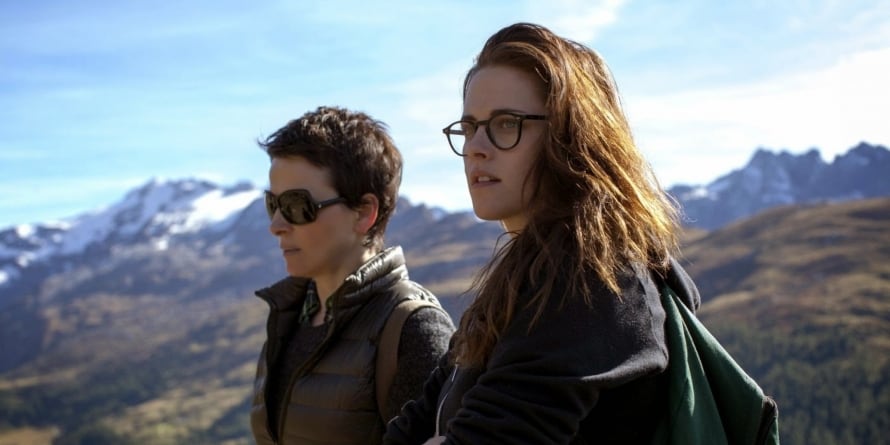 Though it charts an actress’s muted middle-age crisis, Clouds of Sils Maria often feels as propulsive and gripping as Olivier Assayas’ marathon-length terrorist thriller, Carlos. Without the gimmicks of techy eye candy or a rushing pace, Assayas swiftly lays out social life as media-driven, especially the lives of celebrities. Phones and iPads are omnipresent, and even a classical diva like Maria (Juliette Binoche) has adjusted the usual actorly ego and insecurity to the rapid, overwhelming judgment of instant reports and social networks. Riding a train to receive a reward on behalf of her old friend and collaborator at the start of the film, Maria enjoys a brief moment of silence in her private compartment, but the second she leaves, the roar of the train comes blasting over the soundtrack, as if the locomotive were representative of all the crap just waiting to rush back at the woman the second she emerges in any public space.

When Maria meets with a hot young director in charge of a remake of her breakthrough film, the two sit in a gold-and-shadow-filled room that could have been lifted from The Godfather and debate their interpretations of the material and Maria’s relationship with it. It’s feelings as business negotiation, and Binoche’s careful modulation of her tone, never too escalated but clearly passionate, reveals Maria as a woman who long ago learned to defend her artistic choices in capitalist terms. The arch setting of their meeting matches the old-school grandeur that Maria clearly loves, but beneath her mask of classical music and grace is a fierce competitor who knows exactly how she will be scrutinized. She meets with a former co-star and ex-lover as if heading off to kill the beast who maimed her as a younger fighter, and for all her high-minded disdain of new gadgets, she knows just how to obsessively image search the younger actress who will be taking over her key part, and even flouts her hatred of exploitative press to look up images of an attempted suicide.

Binoche’s Gena Rowlands routine, at once elegant and feral, is more than enough to power the film, but Assayas juxtaposes her with Kristen Stewart, who plays Maria’s popcorn flick-loving assistant, Valentine. Stretching back to Antonioni, if not Chaplin, films about the face pace of a technologically driven world tend to present characters as fundamentally incapable of living at the pace of machines, but Assayas appears to have actually met a young person in the last decade, and he depicts Val as being in her element with a phone in her hand. When the two receive word that the friend for whom Maria was accepting an award has died, Val immediately starts making preparations for her boss, and as a stuffy Swiss guard sniffs about how his countrymen do not publicly weep over their dead, Val is speaking on two phones at once in an effort to get a full handle on the PR impact of the news. Binoche’s quiet self-righteousness, a desperately maintained air of nonchalance, regularly crashes into the brick wall of Stewart’s wholly authentic remove, her press tour-honed ability to step outside herself and watch celebrity frenzies with an impassivity bordering on godlike curiosity. Val is so confident in navigating the endless blitzkrieg of press and outreach that she begins to look like a mother figure for Maria, a fact that just so happens to mirror the narrative of the story Maria now plays twice, once as the ingénue, now as the feeble matron led helplessly by her precocious muse. Maria, of course, spots this in an instant, but she’s already too enthralled to the emotional anchor of Val’s indifference to assert herself.

Assayas mines a great deal from the interactions between the two, and regularly highlights their fundamental incompatibility. Maria would love nothing more than to forget her Hollywood work as second fiddle to various men in blockbusters, but Val only cares for such movies. Discussing Joann (Chloë Grace Moretz), the young, rebellious tabloid queen taking the part Maria made famous, Val offers a defense of the actress’s goofy sci-fi movie so elaborate she practically becomes a Cahiers du cinema critic as Maria laughs at the absurdity of it. (Binoche even executes one of the best spit takes in years in response to Stewart’s alternately enthused and ironic comments.) But if that scene makes a big deal of their contrast, other moments code them more subtly. Maria lives in a world of mahogany and marble, where even interiors seem lit by a sun that shines only for her. But when Val takes off abruptly to get a break from Maria and drives off alone, the frame trades warm tones for cold metal, and the soundtrack switches over to Assayas’ preferred post-punk in a bracing grind of feedback.

For all the nods to the likes of Antonioni and Bergman’s Persona, the film excels at teasing out its themes of duality and insecurity in such moments. Binoche and Stewart have such easygoing chemistry that they paper over the more stilted, insistent dialogue with grounded charm. Moretz, too, adds shades to the usual depiction of an overhyped, overstimulated rising star; yes, she gets into imbroglios with an older, married man and struggles with chemical dependencies before she can legally buy a drink, but she also commands Maria’s reluctant respect with her self-awareness and her uncompromising positions on her own work. Assayas’ finesse for supplementing character with surroundings keeps the more fanciful vistas of clouds roiling through mountains, or the existential mystery of a character’s sudden disappearance from the frame, from becoming too abstract. Many things are suggested by the film, be they grandiose themes of identity or sly banalities like the truth that an artist acts best when networking. But above all is Assayas’ occasionally pained but largely optimistic view of the way that making art, just like viewing it, can always change perspective. It’s a fitting belief for a man who started as an upstart and now makes some of the most probing, elegant chroniclers of physical, immediate history this side of Hou Hsiao-Hsien.