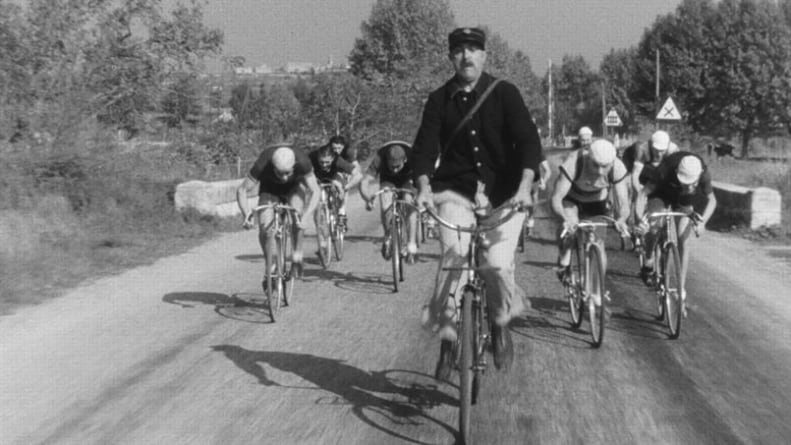 Jour de Fête precedes the creation of Monsieur Hulot, the alter ego that carried Tati through the end of his career.

I’ve watched and re-watched the films of Jacques Tati for 30 years. I was in high school when I first saw Playtime as part of a touring retrospective of his films in the ’80s. As a young man I was impressed by Tati’s visual inventiveness and took his astute observations of France as romantic and charming. Decades later, I have a completely different understanding of his films, one that’s at odds with the youthful idea that these movies were just about fun.

According to Tati biographer James Harding, we may have to thank Nazis for Tati’s first feature ever happening. Fritz Sauckel arrived in Paris in 1942 with orders to corral workers from occupied territories as “volunteers” to replace German workers who had gone to war. To avoid forced labor, Tati fled Paris for the countryside and ended up on a farm near Sainte-Sévère-sur-Indre. Named after an Abbess who founded a monastery in the seventh century, this little French town that looked like something out of the 19th century was Tati’s home for more than a year. When the war ended, Tati bade farewell but promised to come back.

Tati returned to Sainte-Sévèrein in 1947 to make the short film “L’Ecole des Facteurs,” (“School for Postmen”), and two years later he expanded that film’s gags for his first feature. Jour de Fête stars Tati and a handful of professional actors, but is also features the humble citizens of Sainte-Sévère. It wasn’t all fun. The little boy who runs from his room at the beginning of the film had to go through his paces over a dozen times before Tati thought it was good enough to print. Despite the meticulous care with which Tati directed his actors, his is a democratic art. “I’m fond of long shots. It’s up to the spectator to find out what’s there to see,” he once said. Tati’s films all serve this ideal. The director observes life from a distance and lets the viewer discover the humor within the frame instead of pointing it out to them. This approach gives Tati’s films their gentle, unassuming quality. But as a result, the observer is seldom immersed in the frame, and Tati’s characters are left observing life from a distance. 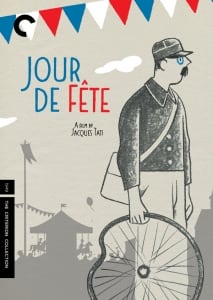 Jour de Fête precedes the creation of Monsieur Hulot, the alter ego that carried Tati through the end of his career. But the bungling observer of life is essentially there in the bicycling postman, François (Tati), who works within the limitations of the world and the people in it. He tries to help a carnival worker hammer down stakes, and can’t understand why the worker keeps missing his mark until he sees his crossed eyes. François holds a second stake off-target so the worker will hammer the right one. It’s a simple joke but a rich metaphor – for photography, for flawed vision, for accepting his fellow man’s flaws.

Sainte-Sévère is an old-fashioned village, but technology is ready to change it in the form of cinema. The fair promises movies in the town square, and as a projectionist prepares film behind a tent, a local man and woman have a silent, shy conversation while the soundtrack of a movie plays a courtship dialogue for them. Technology speaks for them, but it also fails them, as the projector slows down and interrupts the budding relationship before it ever gets started. The theme of missed connections runs throughout Tati’s films; Hulot (almost) never got the girl, and there is no romance at the fair.

Technology hits the postal service, too. Jour de Fête begins as comic observation of a village under the temporary spell of a traveling fair. The only thing passing for a plot point comes when François and a fellow postman watch a documentary in the film tent about American’s fast, automated postal service. This sends him on a whirlwind attempt to match Yankee ingenuity and speed, at one point bicycling past riders in the Tour de France (a joke Pee Wee Herman borrowed). But at what cost? What François gains in speed, he loses in the human connection he made when he delivered mail with a lingering smile or conversation.

François takes the reins as Hulot never would. But curiously, Hulot’s role as observer is partly assumed by the Greek chorus of a hunchbacked old woman who wanders about town with a goat. She watches villagers throughout the film, noting the trunkful of carousel horses that arrive in town and tsk-tsks as workmen navigate wooden chairs that she knows have been freshly painted. The little old lady is a stark contrast to the film’s other observer, the boy looking out his window at the arrival of the fair. Young and old observe this cycle of life, with one difference: the boy runs after the horses, joining in life. The little old lady essentially hands over the reins to François at the film’s end. Picking him up after his botched American-style delivery attempt, the woman, who appears with a horse-drawn carriage, shows François the proper speed at which to really observe life.

Jour de Fête restages jokes from “L’Ecole des Facteurs,” and this isn’t the last time we’ll see some of these jokes either. The business with the chairs, the conflict between the old world and modern life, between France and America – these and other themes would come to play throughout his career. And it’s somehow chilling that the director grew from this charming study of a bungling postman to a masterpiece that follows a man who is unable to deliver a single letter.