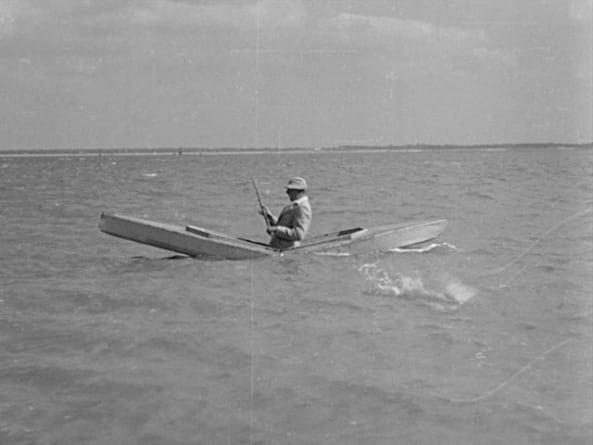 With M. Hulot’s Holiday, Jacques Tati introduced the world to the character that would define his career.

With M. Hulot’s Holiday (1953), Jacques Tati introduced the world to the character that would define his career. If his first film, Jour de Fête, presented the conflict between the old world and contemporary life, his Hulot was a man out of time, an unwitting carrier of ideals past that constantly butted up against the confusing and overwhelming changes that come with modernity. But while Tati would examine this dichotomy in greater detail in subsequent Hulot films such as Mon Oncle and Playtime, M. Hulot’s Holiday is a gentler look at the pratfalls that await a person who is hopelessly, and even willfully, out of step with the hustle and bustle that still follows, even when one is trying to leave it all behind on a beach vacation.

Cinephiles can quickly point out Hulot’s distinctive accoutrements and habits. Constantly sucking on a pipe, black hat perched on his large head and his bulky body swimming in a light-colored trench coat, Hulot lurches and almost skips when he walks. Just like the Little Tramp had his hat, cane and duck-footed waddle, Hulot’s habits and sartorial sense follow him from film to film. But while both characters are often the font of trouble, the Tramp quickly finds a way to evade his issues while Hulot clumsily makes whatever accident that befalls him or the people around him even worse.

Just take a scene when he enters the beachside hotel that makes up much of the setting of Holiday. Hulot opens the front door to the lobby, sending in a gust of wind that disturbs the other guests who are trying to relax there. Newspapers and letters disperse as a hapless clerk tries to stamp them to the floor. A woman pouring tea misses the mug as the breeze splashes the liquid away. All the while, Hulot is standing outside, obliviously trying to gather up his baggage. Chaplin’s Tramp would have smiled, shrugged and retreated to his room. Hulot has no idea that he caused a problem in the first place. 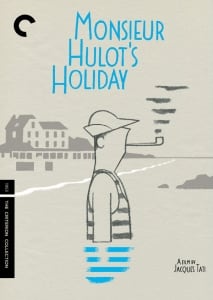 According to Tati, he designed Hulot to be conspicuous, making him a contrast to the miniscule Chaplin. He said that the Little Tramp “could hide behind a small trash can, leave his hat on the can, then sneak behind another small can, while making people believe that he was still in back of the first one, whereupon he would come back to grab his hat. Hulot, by contrast, has the stature of a rather steady or stand-up guy.”

But Hulot does share one trait in common with the Tramp as both are marginalized, but for different reasons. In films such as City Lights, people don’t see Chaplin’s character because he’s a bum and people just walk past bums without a second glance. Hulot’s anonymity is different, however. He can afford a weekend at the beach, but he is so painfully normal, that most of the guests at the hotel barely even notice him. However, the ones that do are the eccentric ones, the ones that Tati celebrates.

One of the pleasures of M. Hulot’s Holiday is that while its namesake may be the main character, he isn’t necessarily the focal point of each scene. This is a film where you can focus on a different character each time and experience a totally different film. There’s the old couple that strolls through the scenes, the woman in the lead, the man dutifully following behind her. They somehow manage to be the first at each meal. There’s the hot-heated Spaniard who constantly gets tangled up in Hulot’s blunders. There’s the businessman, on leave with his family, constantly awaiting international phone calls. There are the two hapless hoteliers who seem to do every menial job.

Though Hulot tries to ingratiate himself with his fellow guests, they are often too wrapped up in their own drama to even see him. Tati wisely allows some of the guests, including a kindly English spinster, the old man mentioned above and some beatniks (all outliers) to recognize Hulot. Otherwise, the other guests only take a moment to acknowledge him when he does something wrong. And this being Hulot, that happens quite often.

In M. Hulot’s Holiday, Tati lets the gags do most of the talking. Unlike like Chaplin’s silent films, people do speak here, but the dialogue is muted, shoved into the background. Hulot barely says anything at all, save his name, a trend that continues throughout the subsequent films. This technique creates for a more immersive experience—the sounds we hear are conversations overhead, snippets from passers-by. In some ways, Robert Altman did the same thing in his early films, except in his case he created too much dialogue, rather than the spare pieces Tati injects into Holiday.

Hulot’s first adventure exudes a gentleness that gets lost in Tati’s later works. Sure, there is plenty of satire happening here, but Mon Oncle and Playtime are more caustic in their worldview. It is clear that Tati has a problem with modernity. However, M. Hulot’s Holiday has left an impression on Saint-Marc-sur-Mer, the town where it was filmed. In honor of Tati, a bronze statue of M. Hulot was placed there, overlooking the beach. The town may have changed since the ‘50s, but that statue never will.