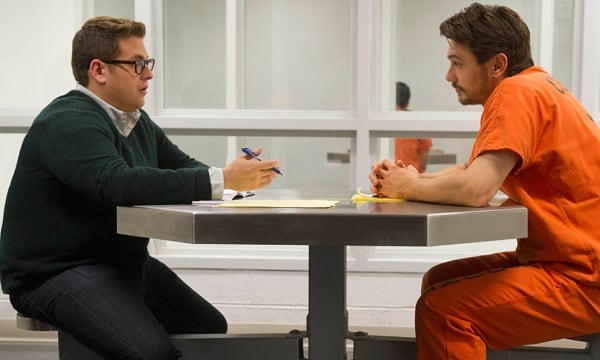 James Franco and Jonah Hill turn in strong enough performances, even if the movie could’ve benefited from actors not so closely associated with crude humor.

Walking out of the theater last year after viewing The Wolf of Wall Street left me with a twinge of sourness. The film was wildly entertaining, but I couldn’t escape the fact that Jordan Belfort, the slick playboy who bilked hardworking folks out of their money to fuel his own destructive hedonism, was pulling another con. By bragging about his exploits in the book from which Scorsese’s Oscar-nominated film was adapted, Belfort was, in a way, coercing the reader and viewer into validating his crimes. There’s a hint of that same unease in Michael Finkel’s memoir-turned-film, True Story—which incidentally also stars Jonah Hill. Finkel is a disgraced New York Times writer who obtained exclusive rights to the story of accused family murderer Christian Longo, hoping a book on such a lurid crime would salvage his reputation. The end result is an intriguing procedural framed as a meditation on lying that nevertheless feels like Finkel is manipulating the audience to his own ends.

Of course, unlike Belfort, Finkel committed no actual crime. His transgressions were purely ethical in nature, as he committed the journalistic cardinal sin of fudging the details. True Story opens with Finkel (Hill) getting thrown out of his primo job at the Times for combining the troubling stories of five different enslaved African boys into one. Meanwhile, Longo (James Franco) gets picked up by the authorities in Mexico, where he’s been on the lam following the murder of his wife and three young children. He’s been using Finkel’s name as an alias because of his admiration for the writer. When the two begin communicating, Longo convinces the disgraced author to chronicle his own account of what happened on that fateful night in Newport, Oregon.

In the weeks leading up to trial, Finkel and Longo become close—with Finkel trying to wrest the real story out of the aloof Longo, and Longo getting some free writing lessons in return. Before long, the accused killer treats Finkel like a close friend, even phoning up Finkel’s fiancée, Jill (Felicity Jones), who begins seeing through the accused murderer’s smokescreen. True Story hinges on the cat-and-mouse game between Finkel and Longo, both trying to use the other for their own reasons, but forging a unique and often frustrating bond in the process. The problem lies in the fact that we’re meant to find fault with Finkel’s naïve willingness to believe, even though that’s clearly what he wants us to think. Finkel gets berated by Longo’s dead wife’s family for cashing in on the misery of others, and that element is supposed to add another wrinkle to the tangled up ethical lines and motivations. But there’s a sense that Longo isn’t the only manipulator here.

Franco and Hill turn in strong enough performances, even if the movie could’ve benefited from actors not so closely associated with crude humor. First time director Rupert Goold (who also co-wrote the screenplay), uses austere cinematography both in the numerous brightly lit prison meeting scenes and in the stark natural beauty surrounding Finkel’s snow-covered cabin. Images of the crimes themselves are not a focal point; instead we’re treated to an impressionist haze of flashback snippets. The focus is instead on the film’s two principal players. Yet Finkel’s professional mea culpa isn’t nearly as compelling as the motivations of a man who would strangle and drown his family. If these motivations are necessarily kept obscure, what are we really left with? Interesting as it may be, the back-and-forth between Finkel and Longo doesn’t feel like quite enough of a story, regardless of its purported truth.