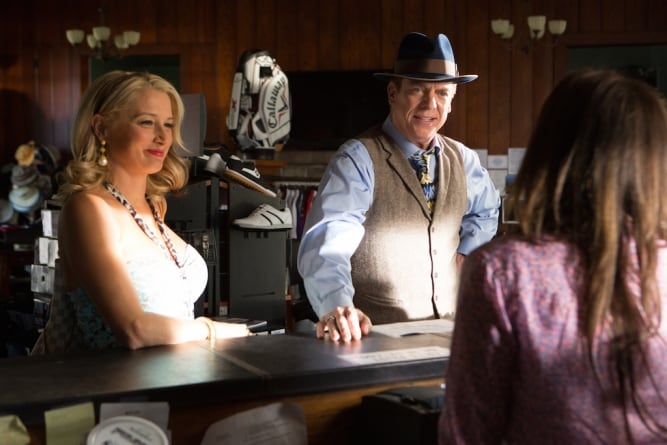 If you ever thought Paul Newman should have played golf instead of pool in The Hustler, congratulations! You’re the reason The Squeeze exists.

If you ever watched Paul Newman in The Hustler and thought he should have played golf instead of pool, congratulations! You’re the reason The Squeeze exists.

“Friday Night Lights” vet Jeremy Sumpter stars as Augie, a small town golf wunderkind who dreams of being the next Jack Nicklaus, taking his girlfriend to Paris and building a better life for his family. He plays penny ante “southern rules” games with his friends, using the entire town as their golf course and picking up enough cash to get by, until he meets Riverboat (Christopher McDonald), a sleazy con artist who ensnares Augie in a world of deception and danger.

The Squeeze I far from great, but it’s not so execrable as to be offensive. The storytelling is modest in its aims and effective in its execution, but it takes itself too seriously in a way that’s at odds with its goofy premise. The story beats are pretty standard, connecting the dots from one yawn-worthy plot development to the next, but there’s enough meat and intrigue to hold your interest if you’re can overlook its oppressive hokiness. Writer/director Terry Jastrow has made the best possible case for “golf noir” as a viable subgenre, but it’s hard not to question his decision to cast the villain from Happy Gilmore as the heavy.

An early set piece tries to shift your perspective on this most milquetoast sport, staging a Cannonball Run style game that might as well be played under “prison rules” with its ridiculous obstacles. It sets up the tragic combination of ennui and poverty that characterizes Augie and his hometown more than golf. You don’t need to grasp the intricacies of the world’s greatest game to get into the narrative, but there’s no denying that golf has less visual appeal than billiards or baseball, especially when juxtaposed with a tense card game in the film’s second act.

The film functions best as a morality play. When Augie brings home the spoils from his first game with Riverboat, the reaction from his mother and little sister is genuinely stirring. The film’s homespun corniness really moves you. The conflict of a southern boy trying to do right without succumbing to the wiles of a slimy huckster is a fascinating one, but it’s undercut by an inconsistent ensemble. Sumpter’s Augie has serious Elijah Wood vibes, but his casual presence gives his scenes the hint of reality television, as though a crime thriller broke out from an episode of MTV’s True Life. Most of the supporting players are natural, but others (like Augie’s father) slather on so much actorly bullshit they can’t transcend the stereotypes they’re supposed to bring to life.
But Christopher McDonald is a godsend, his face a welcome canvas of devilish wrinkles and the menace of his pointed eyes. He’s Old Scratch, Vince McMahon and Iago all in one. The dramatic heft he brings to the table is a counterweight to the cloying, comedic afterburn of his association with Gilmore. It’s the most anyone has made of his talent since Requiem For A Dream, but the rest of the project can’t match his presence. McDonald has great scenes with another undervalued talent, Michael Nouri, and it would be great to see him get a Whiplash sized role in a more ambitious Sundance effort.

The Squeeze flirts admirably with a new take on noir, Augie’s fish out of water struggling with his convictions under the neon lights of Las Vegas. But a tonal shift late in act two designed to shock the viewer just doesn’t play. Riverboat’s cold villainy is too convenient to be believable. Like any good morality play, the transgression that leads Augie down this dangerous path is his own, and the final golf match at the end of that road is lensed like the battle for his mortal soul. The stakes are high, but the resolution isn’t earned during the movie’s brisk run time. You feeling as cheated as one of Riverboat’s marks.