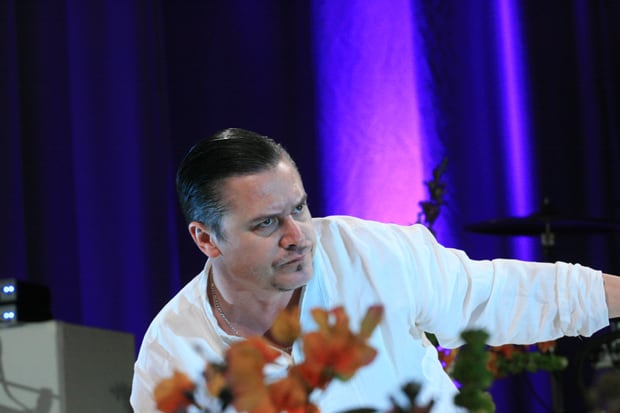 “Holy fuck, we were going to see Faith No More, a band that hasn’t recorded a new album nor toured North America for 18 years.”

The eight of us sat at a table outside a bar on a warm spring night drinking beers and Old Fashioneds. Demographically, we couldn’t be more similar, despite arriving to Portland from disparate points across the country: white, pushing 40 or barely cresting that magical age, the majority of us fathers with some sort of facial hair (well, those of us who could actually grow some). Not everyone knew all the others gathered there and after some precursory small talk the tattoo artist (this is Portland) quieted the group and posited this question: “When did you all get into Faith No More?”

Is it a surprise that each one of us mentioned “Epic” as the gateway drug to Mike Patton’s most famous creation? The image of a gasping fish out of water, stolen cassettes from Caldor, Patton’s maniacal “Saturday Night Live” performance, Mike Bordin’s amazing dreadlocks and the life –changing tracklist of Angel Dust spilled out of the men gathered around that table. Holy fuck, we were going to see Faith No More, a band that hasn’t recorded a new album nor toured North America for 18 years. The fact that songs like “Epic” and “Everything’s Ruined” still carry such emotional resonance for so many people more than two decades later is a testament to the power of Faith No More’s continued significance despite so many years of silence.

That excitement carried over to the Keller Auditorium’s lobby, an unlikely venue for a metal band, soon be home to a production of “Phantom of the Opera” and a Mark Knopfler concept. Sure, the audience fit the bill in their faded concert T-shirts, leather jackets and dyed black hair. Middle aged men definitely dominated the group, but who would you expect at a Faith No More show circa 2015? All the punkasses who grew up on The Real Thing and Angel Dust have pushed into middle age. It’s kind of unnerving to think that so much time has elapsed, but there we were. And I’ve never seen a merch table line as long as that. Get your Faith No More T-shirt while you can, but who would buy a shirt that says MOTHER on the front and FUCKER on the back? (Plenty of people, actually).

With new record Sol Invictus still more than a month away, it was unclear how heavy the band would lean on new material in the set, especially with a crowd hungry for old favorites. The sold out crowd filed to its seats while the crew set numerous planters filled with fake flowers around the stage, flanked by enormous speakers cloaked in white. Keeping with the motif, the band took the stage all dressed in white (with the exception of a red handkerchief in Patton’s back pocket) and kicked into the lumbering new track “Motherfucker.”

The sound might have been middling, all heavy bass drowning out Patton’s vocals, and guitarist Jon D. Hudson, who joined the group just before its 1998 breakup, seemed lost during some songs, but the audience didn’t give one fuck, shouting along to songs such as “Land of Sunshine,” “Caffeine” and “Evidence.” “Epic” came five songs into the set, a bold move for a band playing its greatest hit at such an early part of the show, especially since two of the three songs that comprised the encore were new ones.

The show’s true highlight came in the middle when the band performed a blistering version of “Midlife Crisis.” Confrontational as always, Patton challenged the audience to do its own rendition of the chorus, teasing us with a snippet of a Boz Scaggs song in the middle. As a performer, Patton remains an odd combination of a confrontational and darkly comic. When he pulled a woman up from the audience during a rendition of the Commodores’ “Easy,” he not only put his arm around her and swayed, but maybe crossed some lines by groping her and trying to kiss her on the way out. I’m sure her boyfriend, if she has one, was thrilled. No sarcasm.

Though the band played a dutiful 90 minute plus set with a good mixture of new and old, Patton did take some time to address the food cart culture here in Portland and make fun of the venue, dismissing it as a place for stuffy opera fans. Seats be damned, everyone around me stood through the entire set, screaming along to Mike Patton’s provocative lyrics.

After the show, many of the guys who shared their Faith No More stories reconvened at another Portland establishment to discuss the show. All of the super fans appeared satiated, though each had a song or two they wanted to hear but didn’t (“The Real Thing,” “Edge of the World”) or songs they didn’t want to hear that they did (“Ashes to Ashes” and for some even “Epic”). But as other patrons filed in wearing Motherfucker T-shirts, all of the lifelong fans at my table still coursed with excitement, that angry young man inside was raging and thrumming to the music that still speaks some sort of truth more than 20 years later.