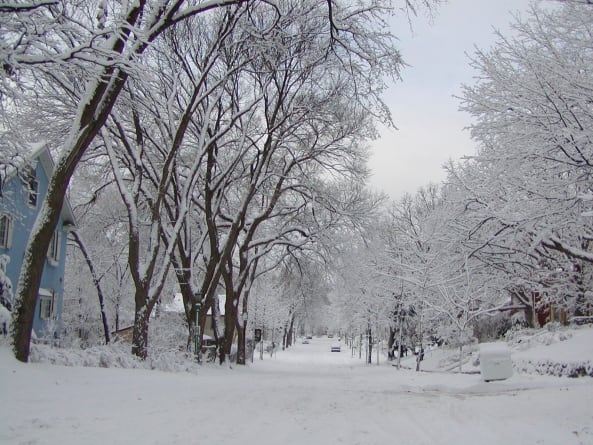 It has been a long, long winter.

The cold breathy melancholy of Joe Duplantier’s vocals swirl over a guitar line that threatens to explode but carries on defiantly for a long and satisfying melody. After a winter as long as this one has been, it’s nice to find something stable and consistent in this great song of rebirth. But like this winter, a storm erupts just when you thought things were coming to a close.

This winter, on many mornings walking to the subway, cursing the bone-chilling temps and falling snow, this song warmed my soul, if not my fingers and toes. For a southerner like me, winter can feel like a long, slow march to death, and in Tunde Adebimpe’s sage and beautiful chorus, with lyrics like “Everything’s gonna be alright” and “Don’t worry, be happy,” I found refuge. Now that it’s spring, I still find relief in this gorgeous reminder to exalt in life’s little joys, my neighborhood’s blossoming flowers and reopened beer gardens among them.

Keith Richards was too zonked out to contribute to some of the Stones’ ’70s records, which was a good and bad thing. This Keefless Goat’s Head Soup ballad gives Mick Jagger more leeway to indulge in his sentimental side, but his pretty entreaties to “wrap my coat around you” pale next to his performance on “Moonlight Mile” two years earlier. On the other hand, wunderkind Mick Taylor had more space to cut loose on his Les Paul, and he unleashes a soaring solo filled with enough gorgeous sustain to last until the snow melts.

The concluding track of 808s and Heartbreak. The title is slightly less poetic, when you consider that most of the album was recorded in Honolulu. But then again, weather’s a state of mind, you know?

Ian McCullogh defiantly sings the title as he leaves his emotional winter behind for rebirth and revitalization. There’s a new experience ahead, and he’s going to dive into it whether you’re along for the ride or not. Whatever this new feeling is, it’s better than what he’s leaving behind.

6. Henning Ohlenbusch — “Maybe I’m Not Meant to Do Anything Remarkable After All” (Rubwrongways)

The depths of winter inspire, if nothing else, an undue amount of deep thinking. Tbis song encapsulates a very self-aware lack of drive and finds an unexpectedly poignant balance between winter-onset existentialism and the achievement of simple contentment with life and its small pleasures. The single was released with four corresponding videos – one for each season – but none of them do Ohlenbusch’s resigned contentment justice as well as the Winter Edition.

Is there a more desolate tune born of the cabin fever and late winter malaise? Cave’s haunted croon, the spiraling piano chords that hit heavily at the starkest moments and the sense of paranoia induced by Martyn P. Casey’s bass playing evoke the isolation of being in a cottage buried under an avalanche. Skin-crawling tension builds and abates as the music grows aggressive, nearly replicating the narrator’s madness in the listener.

Songs that sound like fresh spring aren’t uncommon, but few songs can capture the final moments of winter dissolving into warmer times. Connected with the cavernous “Carbon Wulf,” “A Thousand Syllables” brilliantly transforms from deadlocked and overcast days into the meditative first seconds of spring. Bibio’s haunting voice, imaging a “frozen dewdrop spider’s web,” is wonderful, but it’s the sun soaked guitar that carries the song to bliss.

As I wrote this, I am looking out at what I hope is the last snowfall of winter in Northeast Ohio. This track from Bonobo’s 2010 LP Black Sands) is the perfect sonic backdrop for this frigid, yet beautiful, moment. Its downtempo electro-jazz melodies steer us to warmth and spiritual enchantment; just be patient as those vibes arrive.

During a trial separation from John Lennon in 1974, Ono made an uncharacteristically gentle solo album that went unreleased until the ‘90s. This beautiful, chilling ballad from that album is one of her most hummable songs, its chorus a wistful memory of walking through the snow in Chinatown to get noodles. But this comes between verses of emotional winter, describing a friend’s suicide attempt and the narrator’s own imminent death in a car crash.