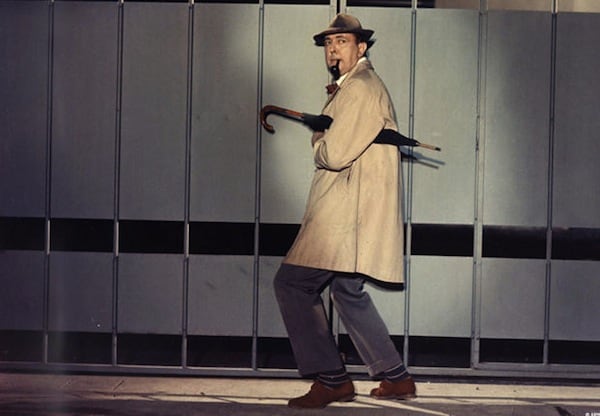 There’s no doubt that Tati was a formal master and that Mon Oncle was precisely the movie he set out to make.

Jacques Tati’s films always start slow. Literally, yes—he has an extraordinarily elaborate sense of how to tell a joke—but also as far as the time it takes me to warm up to the idea of sitting all the way through them. I’ve been watching his films for 15 years, and I still don’t see how there is any other way to take them. Tati, who wrote, directed and starred in all of his six films (of which Mon Oncle(1958) was the third), allows almost no dialogue in his stories. He seems squeamish about putting any of his impressive physical humor front and center for his audience to enjoy. To Tati, an acrobatic comedian but a staid director whose greatest talent was surely his ability to hide elaborate jokes within highly controlled frames, less seems to have always been more. His films never really have much going on, even when you’re watching them for their thematic subtexts (modernity and the benefits of arrested development, in the case of Mon Oncle). A modern audience could be forgiven for recoiling from them in the first 10 or 15 minutes, for having to soldier on past extended set pieces that would try the patience of any kids born far after Tati’s heyday. Perhaps younger cinephiles watch his movies mainly out of respect for films to which superlatives are often attached and which, despite being puzzlingly unfunny, carry a lot of weight in the annals of cinema history. I usually slog through them, a devoted cinephile determined to recognize what so many others regard as great art.

The same thing always happens: Tati proves me wrong. His films do add up. On the surface, they’re boring as hell, but in the way of a deadpan professor who gives a lecture on a subject you don’t really care about until you begin to recognize the craft of his oratory style—in the very acknowledgement of its boringness he can bring out what’s fascinating. To put it a slightly different way, watching Tati is like sitting through a lecture on why you should appreciate out-of-date foreign comedy and actually being convinced of the point by the professor. Tati’s films are slight, airy and ultimately charming, especially once you realize how much love he has for his silly little characters and perfect little worlds, and how little he cares whether the subtext of his stories registers with his audience or not.

Mon Oncle is about Tati’s primary character, M. Hulot (Tati himself), an erstwhile letter carrier with no apparent calling in life besides engaging in clever tomfoolery, who stumbles through the old-world French neighborhood where he lives. He causes minor havoc with his bumbling and major joy with his ability to play with children. Hulot has a sister (Adrienne Servantie) who’s married to a plastics corporation executive (Jean-Pierre Zola), both of whom live in a teeth-grindingly modern section of Paris, in a technologically advanced house of the husband’s own design. Hulot is subtly out of place in this milieu—not so much perplexed by the space age (for 1958) gadgets that run the house as amused by them, eager to treat them as a kid would a plaything, while feigning confusion. But even so, he comes by frequently to babysit his nephew Gerard (Alain Bécourt), whose biological childishness gels with Hulot’s spiritual kind. 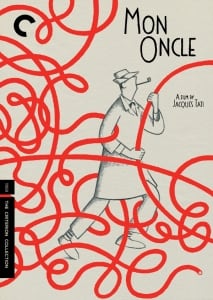 A clear theme is presented in (Mon Oncle), about the silliness of all the modern complexity of new Paris in contrast to the warmth and connectedness of the denizens of the old neighborhood in which Hulot lives. Tati gently underlines the reason for the discrepancy between the two versions of Paris by lingering on the rubble in the neighborhood that connects them—this new Paris, Tati suggests, is an unfortunate effect of Parisians having to rebuild after World War II. Just as in America, all the war machinery that was in place for the French in 1945 seems to have led to a rebuilding effort that was looking to the future. And just as we know that the War was no Parisian’s fault (certainly not the harmlessly officious brother-in-law), we know that Tati’s comparison is not mean-spirited or even particularly wistful. Tati seems to be saying, “Old Paris is much more fun, but if we must live in this new world, let’s make a game out of that, too.”

The best parts of Mon Oncle aren’t its themes, though, which are simultaneously thinly sketched and broadly cast, or even its jokes, which are clever in Tati’s slow-as-muck, patience-trying sort of way, but rather its vision of the pre-War neighborhood that Hulot—even with all of his bumbling—seems to disappear into like a fish in a river. The scenes in which Hulot takes Gérard to play with the ragamuffins who run through his neighborhood, playing pranks on old people, eating ridiculously over-sugared beignets and playing outdoors because that’s where children are obviously (to Tati) most at home, are some of the simplest and loveliest evocations of childhood on film that I can think of. And that includes the heartbreaking images from François Truffaut’s The 400 Blows, released only one year later and clearly influenced by Tati (Truffaut was a Tati acolyte who even included the old master in one of the later Antoine Doinel films).

There’s no doubt that Tati was a formal master and that Mon Oncle was precisely the movie he set out to make. If his style of comedy comes off as stolid and anachronistic to a guy raised on action movies from the ‘90s, then maybe that should be a clue that I need to reevaluate a lot of the modern machinery with which I judge movies.