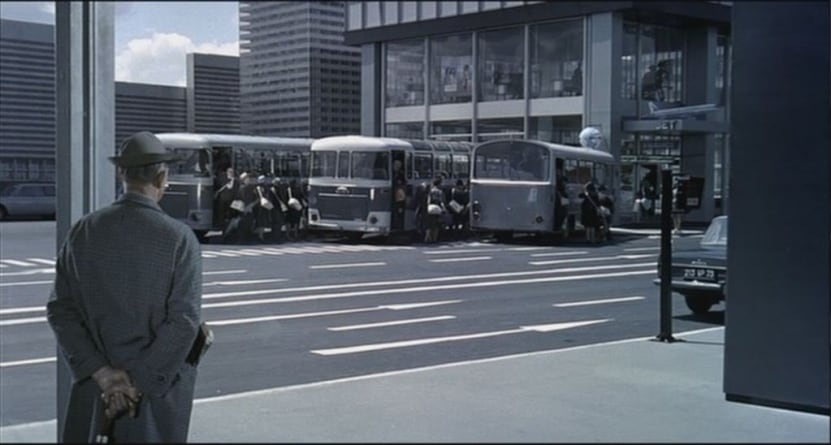 Playtime immerses you in an almost monochrome, inhuman world.

A critic once called Kazuo Ishiguro’s novel The Unconsoled “a 500-page anxiety dream.” Jacques Tati‘s 1967 masterpiece Playtime is fairly described as a masterpiece of slapstick comedy, but the more I see it, the more I feel it’s a 124 minute nightmare of modern life.

Tati’s previous film, Mon Oncle, showed a world in which the old fashioned and the new lived uneasily together. In Playtime, the old world has been soundly defeated, Paris landmarks like the Eiffel Tower visible only in the reflections of glass monsters. Tati wrote that, “Our world becomes every day more anonymous and more uniform … one vast clinic. But if, to begin with, the inhabitants feel lost, they gradually get used to living in their new town, and then they manage, bit by bit, to humanize it.”

It’s a hard won humanity. Playtime immerses you in an almost monochrome, inhuman world. The film opens in a clinically barren modern waiting room that could be anywhere but turns out to be Orly airport, where a group of American tourists have arrived, comforted that this stop on their world tour looks like any other stop around the world. Travel posters advertise foreign lands with images of the same modern office building, and an old biddy remarks, “I feel home wherever I go!” 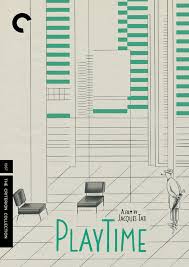 Slapstick comics don’t ordinarily reference the master of the macabre, but Hulot’s entrance in Playtime recalls Alfred Hitchcock’s cameo in North by Northwest. That director misses a bus; in Playtime, Tati gets off a bus that happens to be the same green and yellow color scheme that Hitch missed. It’s one of the few examples of color on an oppressively grey set.

Before Hulot appears, lookalikes dot the landscape, which again suggests the mistaken identity and lack of identity of North by Northwest (remember that the “O” in Roger O. Thornhill stands for nothing). This is another part of the Kafkaesque nightmare: the uniform glass buildings of the modern city make it hard enough to find your way, but when other people look just like you, where did individuality go?

In the middle of this confusing world, M. Hulot tries to keep an appointment with M. Giffard. We never find out why. Hulot is barely able to navigate a modern office building that looks like every other office building and cubicles that look like any other. The tragedy of this modern world is the inability to make a connection. Hulot’s attempts to connect are foiled, first with Giffard and then with Barbara, the one American tourist who doesn’t come off as an obnoxious boor. She may have avuncular feeling toward Hulot, placing her hand on his shoulder to brace herself. As usual with Tati’s films, he doesn’t get the girl, prevented from saying a proper farewell by a fascistic store clerk who tells him he can only leave the store via the marked exit.

Hulot, like Tati, observes others, but while the director mimicked gestures for his actors to duplicate, Hulot watches others for tips on modern living. In one of my favorite sequences in the film, Hulot watches a businessman fidgeting as he too waits for Giffard. The clean-cut man makes rhythmic sounds with the accoutrements of modern business, brushing away his pants suit leg, zipping up a briefcase, taking snuff. Hulot is in the background, watching from a distance and seeming to nod at one point as if he is taking in an important lesson about the modern world.
Playtime seems to take place in a 24 hour span, following a whirlwind trip in which the American tourists land in Paris and then return the next morning. What happens in between could happen almost anywhere. The film’s central set piece, an extended sequence set at the opening night of a posh modern restaurant, is a densely packed observation of humanity at leisure. This leisure is initially dictated by a modern design plan that falls apart on a grand scale, and when this anonymous architecture self-destructs, only then do hints of the real Paris appear.

Tati’s vision of an increasingly homogenous world was prophetic, but it did not yet exist. The director couldn’t close Orly airport or shut down Paris streets for weeks of filming, so instead of shooting on location he spent five months constructing a huge set on the outskirts of Paris. Dubbed “Tativille,” the set was the size of a small town, and had its own infrastructure, complete with water and electrical lines. The film’s budget skyrocketed, and production and funding delays meant the film would take three years to complete.

I first saw Playtime nearly 30 years ago and have seen it projected a half dozen times since. The film is fixed in time, but whenever I view it I see something different. As a young man, I reveled in cool visuals, a beautifully constructed ballet of life. As someone approaching middle age, I now see Hulot’s charming observation of others as the chilling distance of a man content to watch life from afar but not to participate in it. You barely hear Hulot’s voice in the film, and if he communicates with his body, what he communicates is that he’s a passenger carried away by a world he observes and cannot control.

The director hoped that the massive Tativille set could serve as a film school or set for future projects, but it was destroyed, and as one of its office buildings came down, he threw a copy of the script at the falling structure. His masterpiece nearly destroyed him.