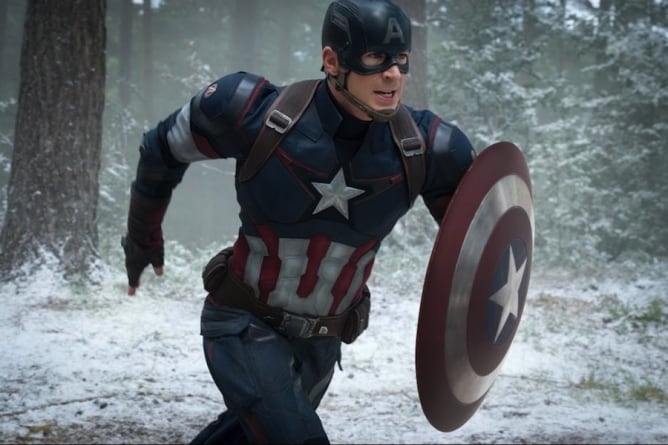 Age of Ultron represents the peak of a certain brand of frenzied, all-in action filmmaking, moving along with relentless, mesmerizing force.

The Avengers: Age of Ultron is the 11th installment in the Marvel Cinematic Universe – the comic book company’s ever-expanding, terrifyingly successful scheme to monopolize summer blockbuster receipts – with the prospect of at least 11 more to come, not to mention the burgeoning crop of semi-canonical TV series. This empire is constructed around the allure of these Royal Rumble-style main events, which interweave plots and characters from satellite franchises, but Marvel’s sleek, strident showpiece differs from its subsidiary movies only in scope and thematic casing. Promoting self-sacrificing cooperation as sacred and power-hungry egotism as the ultimate evil, these mashups work off the same binary conflicts as the standalones, whose formulas (cheap death fakeouts, hand-wringing techno-angst, portals, all-powerful objects from space) have become more familiar as the films have multiplied. Charting crises of ambivalent heroism without exhibiting a trace of actual ambivalence, these movies have varied in quality, but none can really be quantified as bad or good, too focus-grouped and savvily constructed to ever exceed or fall below expectations. Each film exists as a mere piece of a larger puzzle, entirely disposable in itself, positioned to provide a fleeting adrenaline rush and the breadcrumb trail to the next big spectacle.

That said, it’s a pretty impressive spectacle; Age of Ultron represents the peak of a certain brand of frenzied, all-in action filmmaking, moving along with relentless, mesmerizing force. Like a prosperous sports dynasty buying up draft picks, Marvel continues to draw in top talent, attenuating the creativity of its directors, writers and actors while pushing them to their technical limits. The venerable Joss Whedon assembled the A-team for what’s supposedly his last assignment, drawing together the swelling cast and an increasingly convoluted plot which builds upon the developments of the four previous Phase Two films. The collapse of S.H.I.E.L.D. in Captain America: The Winter Soldier has left The Avengers to function as the world’s de facto Super U.N., battling evil weapons cartels and the remnants of the Hydra organization.

This all changes when one of the omnipotent space totems (Loki’s Chitauri scepter, recovered from a dreary Eastern European research facility) falls into the hands of Tony Stark (Robert Downey Jr.) who seems to have forgotten all the lessons learned about humility in Iron Man 3. Stark is determined to harness the scepter’s mysterious power to clandestinely develop a global defense shield, a plan whose urgency is hastened by some secret, sinister influence from Wanda Maximoff (a.k.a. Scarlet Witch, played by Elizabeth Olsen), who plants a vision of future destruction in Stark’s brain. Complemented by twin brother Pietro (Aaron Taylor-Johnson, playing a variation on comic book hero Quicksilver), the revenge-seeking Maximoffs end up as the requisite sub-scoundrels to the titular villain, voiced by a game James Spader. Part computer virus, part AI demigod, Ultron bursts out of Stark’s experiment and immediately begins wreaking havoc, seeding himself throughout the Internet and into an army of self-constructed drones, hatching a plan to save humanity that involves wiping out most of it first.

Humanity will of course be preserved, and the main players will survive the mayhem. Yet what keeps Age of Ultron from feeling like a mere formality is how it toys with the team’s internal mechanics, creating an interlinked network of simmering conflicts and shaky alliances that at least makes for some genuine tension. So while the film is still familiar, it’s also an evolution for the series, realizing that the biggest tension is not in the predictable outcome of the climactic battle but how the quarrels which lead up to it will affect its superhero utopia. For the film’s first two thirds this is conveyed with entrancing expediency, with exposition, comedy and character-building all seamlessly shuffled amid a mixture of long and short action sequences. This structure acknowledges the jaggedness which inevitably defines this sort of all-star mashup, incorporating it into the fabric of the film rather than fighting to conceal it.

Ever since the first Iron Man these movies have imbued their cartoon heroism with a social conscience, taking a soft-touch approach to questions of how power and force are wielded in a global setting. Such subtextual concerns usually feel like transparent bids to add intellectual polish to glossy pop product, in many ways disingenuous, but also reflective of the increasingly embattled nation they hope to represent. The romantic view of The Avengers as exemplars of an idealized American spirit continues in this second installment, which wholeheartedly endorses the collaboration and conglomeration that make the country great, while also acknowledging its unignorable dark side. Despite their selfless efforts to do good, the heroes here remain part of a lumbering system that causes new problems in each attempt to solve old ones. Faced not with an external alien threat but a self-created monster whose bemused ambivalence toward the fate of humanity reflects their own fractious group mindset, the team shows serious signs of strain, unable to make headway without causing more destruction to themselves and others.

This considered level of contemplation, combined with the fantastic pacing and dizzyingly choreographed action scenes, creates a film that, at least for a while, feels satisfyingly whole. That feeling abates somewhere in the middle of the interminable final battle, which again wipes the slate clean, tabling most of the running conflicts and focusing merely on the pure thrills of heroism. This is another important reminder that, for all the positive qualities these films might posses, they don’t have the capacity to follow through on them, slavishly dedicated to folding disparate parts into an all-enveloping pink noise. Intended to lull viewers into a reverie while keeping the primed for the next episode, they flesh out their spectacle with the appearance of ideas, but the rigid formulas created to achieve such smoothness leave little room for actual creativity or any opportunity to do anything with those ideas. Entertaining as they may be, it’s impossible to forget how compromised these films remain, how many industrial requirements they need to satisfy, designed expressly with large-scale global consumption in mind. Attempting to convey a sort of tortured modern American mindset, they end up working even more effectively as paragons of the current multiplex culture, in which films are less individual entities than trading cards, baubles to be collected rather than individually experienced, both lifelessly familiar and more viscerally thrilling than ever before.