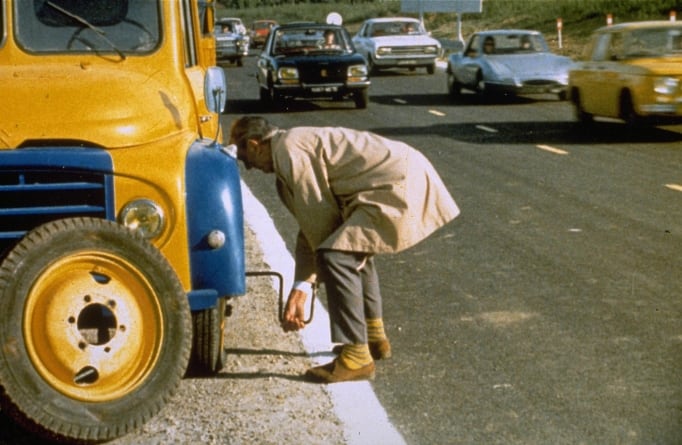 How bizarre is it to see M. Hulot in a film featuring hippies?

How bizarre is it to see M. Hulot in a film featuring hippies? Jacques Tati’s man out of time seems completely lost in his fourth film, Trafic (1971). It makes the character’s debut in M. Hulot’s Holiday (1953) seem downright provincial in its seaside, black and white innocence. However, Tati has always used Hulot as a protest against the suffocating crush of modernity, and in Trafic he takes on not only the automobile industry, but what the ownership of cars does to us as humans.

In his prior film, Playtime, Tati took on modern architecture, with Hulot adrift amongst an expanse of horrific buildings, a far cry from the seaside idyll of Holiday, a landscape that made the garish modern house of Mon Oncle feel downright quaint. Here, he examines all the ways having an automobile alters human behavior. For the first time, Hulot seems to have a vocation, working as a designer for a French company on a car created for camping trips, featuring everything from a built-in tent to picnic table to television. When the film begins, Hulot and another co-worker are tasked by the car company (Altra) to transport the camping car to an auto show in Amsterdam for its debut. This being a Hulot film, all hell breaks loose along the way. 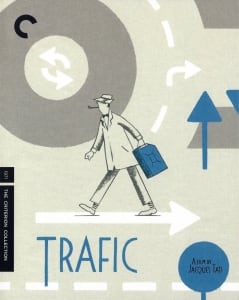 In M. Hulot’s Holiday and other prior films, Hulot is often the catalyst for a series of disasters. In Trafic, he is more often an innocent bystander, Tati’s perceived notion of car culture insanity being enough to relegate his hapless hero to the sidelines. This is a society that no longer needs Hulot to foment chaos. With the camping car loaded into the back of an old truck, Hulot and Marcel (Marcel Fraval), along with an attractive American public relations rep Maria (Maria Kimberly), must overcome various mishaps on the road to Amsterdam.

As Tati made more films, he became bolder with his set pieces. Just think of the restaurant scene in Playtime, for example, in its glorious intricacy. The centerpiece in Trafic is a big pile-up, caused by Maria’s determination to get the camping car to Amsterdam. It is a delirious moment of mayhem, the aftermath even more amusing as the people must escape from their vehicles and actually interact with one another.

Once again, Tati rarely shoots his actors in tight close-up. We do get close-ups of the some extras when they are engaged in the film’s gags, but we hardly see Hulot, or Maria for that matter, in a tight frame. There is also more dialogue this time around, a panoply of languages including French, Dutch, English and Flemish. However, a lot of the actual lines are obscured by the sounds of automobiles or people talking over one another.

Unfortunately, Trafic is not the critical triumph that was Playtime. Tati was reeling from the money lost making the elaborate Playtime and had to team up with a Dutch production company. He worked with and lost a co-director. At one point, Tati even ran out of money, getting help from some Swedish filmmakers shooting a documentary about the film. The stress and chaos show. Not all of the jokes work and some of them just aren’t funny, including a gag where a group of hippies pretend to kill Maria’s pet dog.

That doesn’t mean Trafic is a failure. The film still oozes with the director’s sensibility, even if there are no sublimely hilarious bits like those that punctuate his earlier films. It makes sense, especially if Hulot is a mere observer in a world full of automated chaos. Sometimes we don’t want someone to tell us where to laugh.