Terry Gilliam’s Time Bandits is one of those odd, off-kilter kid’s flicks you forget exists as you age. After the endless sequels of childhood favorites (and corresponding toy and marketing tie-ins) in later youth and regurgitative remakes rammed down one’s throat as an adult, quirky titles with a true flair for the inventive can be easily forgotten. Not only that, but when it comes to Gilliam’s work, one’s mind strays in the Brazil, Twelve Monkeys and Fear and Loathing in Las Vegas direction, rather than a The Adventures of Baron Munchausen and Time Bandits tack. But what Gilliam has excelled at in his career, both in those films as well as less celebrated gems like The Fisher King, has been casually, playfully (like a child, you could say) breaking down the walls – sometimes literally, as in Time Bandits and Fisher King – between the real and unreal, exploring the occluded realm where the very fictive meets the quasi-factual. What kind of kid doesn’t go for that sort of thing? Okay, maybe not all kinds, but I was definitely counted among those that did.

And Time Bandits’ target is a specific kind of kid. In the film, young Kevin (Craig Warnock) is a blossoming history buff, more fascinated by Thermopylae and the exploits of Alexander than the telly his uninvolved parents are chained to or the “time-saving” gadgets his mother obsesses over (she marvels over how the neighboring Morrison family has an appliance that converts a “block of ice to beef bourguignon in eight seconds, lucky things”). When a cadre of diminutive hustlers burst through his closet door and whisk him away through a portal in time, he is understandably overjoyed to leave behind his humdrum row-house existence in a characterless English suburb in favor of adventure traipsing through the ancient, medieval, Edwardian and Napoleonic eras. The quirky gang, made up of self-appointed leader Randall (David Rappaport), Wally (Jack Purvis), Og (Mike Edmonds), Strutter (Malcolm Dixon), Fidgit (Kenny Baker – Star Wars’ R2-D2) and Vermin (Tiny Ross), exploit gaps in the time-space continuum left by the Supreme Being in his hasty week-long creation push. The dwarves, who had until recently been under the employ of the Supreme Being himself, decide that the best usage of these wormholes is, naturally, grand larceny, and they hop from era to era blithely robbing everyone they encounter. 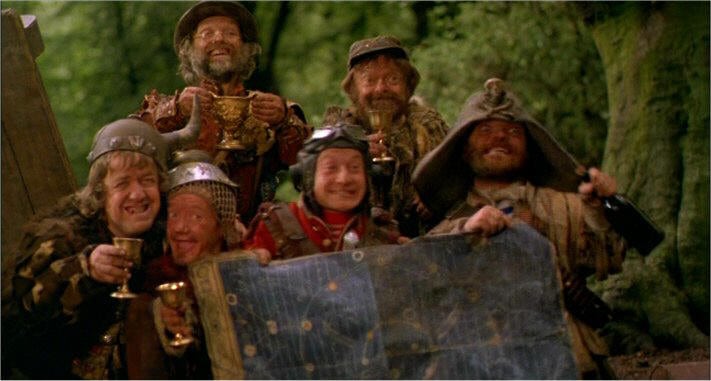 In the changeover from child to adult, I had forgotten about (or perhaps failed to fully register) the cameos in Time Bandits, as Ian Holm, Sean Connery, Shelley Duvall, Sir Ralph Richardson and a very youthful though no less smarmy Jim Broadbent all make appearances. Beside Bond and Bilbo, Gilliam’s fellow Pythons John Cleese (as a limply royal and hilarious Robin Hood) and Michael Palin (with whom Gilliam co-wrote Time Bandits) show up to add further madcap inanity to the historical milieus which the Bandits drag Kevin through. From visiting with Agamemnon (Connery) – prior to being murdered by his wife Clytemnestra of course – to briefly being wrapped up in Napoleon’s siege of Castiglione, each segment was as brilliantly rendered, although a bit campier, than I remembered. Having been a history nerd myself at the time, counting among my favorite books (pulpy science fiction and fantasy mostly) serious tomes like A.J.P. Taylor’s The First World War, I recall it being more than enough to capture my interest, camp aside. And the heist scores of the “international” (and supposedly intertemporal) thieves, shown in flintlocks, Union caps, flyer goggles and horned raider helms, sheds some light on my proclivity for performing peculiar mix-and-match with my LEGO figurines, yielding pirate-gunner-swordsmen and tribal grenadier-spacemen.

Part of Time Bandits’ strength stems from the admixture of the highbrow and lowbrow, something I wasn’t acutely aware of during those first viewings in the late ’80s, years after Time Bandits’ original release, but which fits neatly in with the Python legacy. And in spite of a throwback soundtrack (partly courtesy of George Harrison), some underwhelming sets and a meandering third act, Time Bandits has aged surprisingly well. Its gags and punchlines remain as fresh as those in classics like Airplane! (subject for another Childhood Revisited, I guess), and the characters and cameos engrossing, even as the costumes and accents may seem straight out of Holy Grail. Chalk it up to invention. Gilliam clearly has enough imagination knocking around in his animator-turned-filmmaker head to keep several generations of children (and their grownup counterparts) entertained. More than two decades later, I’m still waiting for the Time Bandits to burst out of my closet and take me away, far from daft reality TV programs, zombie consumers and plastic-covered couches. A boy has to dream, after all. 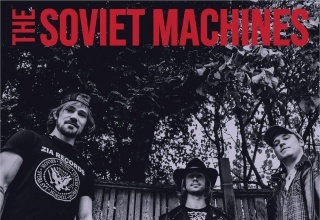