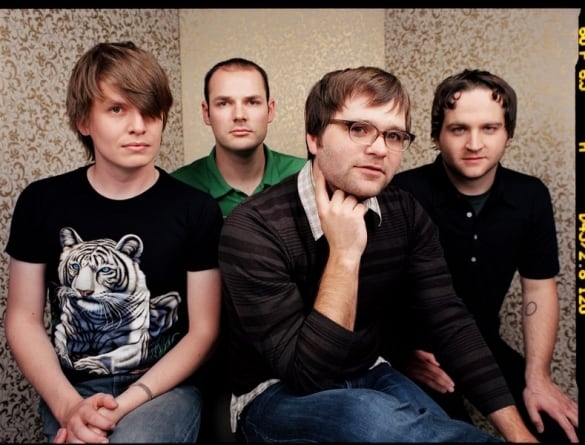 Detroit’s Fox Theatre was loaded with fans so adoring that they sang the words to Kintsugi filler as earnestly as old favorites.

It’s difficult to sense whether Death Cab for Cutie’s current performance ethos is a continuation of the themes of their latest album, Kintsugi, or a lackadaisical avoidance of them. Kintsugi, a collection of songs released after the departure of key member Chris Walla that consciously embraced the successes and failures of its past for a band that has plenty of both, was a statement of self-confidence for an aging group who have more or less become the dad rockers of the indie landscape. Live, the band hasn’t much changed over time, still performing the hits and fan favorites the same way, from their stage manner to the arrangements to the presentation itself. Unusually, despite being one of the focal points for the themes of change in Kintsugi, Death Cab still performs like Walla never left. Some fans, of course, might be happy to relive their old experiences without the interference of newness; others might find it a missed opportunity for the band to take a step in a different direction, even if just slightly.

Despite being one of the few shows not to be sold out during this leg of their North American tour, Detroit’s Fox Theatre was loaded with fans so adoring that they sang the words to Kintsugi filler as earnestly as old favorites. Loyalists clearly don’t care that the Death Cab live experience is still so familiar. Each of the band members were given their moments to shine, and even if some have been concert staples for years, they still work well: bassist Nick Harmer dominated the chunky foundational bass line of main set closer “I Will Possess Your Heart,” drummer Jason McGerr perfectly drove the intricate grooves of songs like “The New Year” and “Black Sun,” and, as he’s always done, frontman Ben Gibbard led the crowd in a sing-along with a solo performance of “I Will Follow You Into the Dark.” The band played their classics with far more enthusiasm than their latter day filler, such as “You’ve Haunted Me All My Life” and “Everything’s a Ceiling,” giving even intimate Transatlanticism cuts the big arena chords fans never even knew they needed. The extended jam of “I Will Possess Your Heart” in particular was an impressive highlight even without Walla around, more dynamic and expressive than Death Cab have ever been.

But even with all these memorable moments, Gibbard and company are just as prone to drag themselves into that pit of bland, indie rock sameness as they are to show off their unique skills. The fatigue of two or three slow songs in a row dulled the audience’s temperament several times during the set, for instance, with even encore-starter “Passenger Seat,” one of the band’s most beloved songs, proving to be a bit of a downer (“This sounds depressing,” said someone behind me who ostensibly had no previous knowledge of the band). At best, they offer a poorly paced performance; at worst, they provide far fewer great moments—or even average ones—than they do tedious meandering.

This is because Death Cab is still doing battle in territory they conquered long ago, and Kintsugi demonstrates little change. Gibbard did his signature back-and-forth sashay through every song and at times even repeated his own stage meandering, often strutting over to the keyboardist and guitarist for eight bars during solos, then off to the rhythm section for eight more (this occurred the same way at least three times). As much as the band played with veteran skill, they also seemed heavily orchestrated and over-rehearsed with no sense of spontaneity. Down points like “Little Wanderer” are even bigger momentum drainers as a result, dulling and mechanical where their performances of classics are surprisingly passionate and exciting.

By honoring their missteps as much as the hits with Kintsugi and their subsequent tour, Death Cab might seem to have settled into middle-aged mediocrity. But when they’re completely in their element, Death Cab could be the biggest band in the world. During songs like “The New Year,” “Soul Meets Body” and “I Will Possess Your Heart,” they played the theatre like most band’s play arenas and stadiums, fierce and energetic, and in those intermittent periods of grandeur, their negative history just floats from memory. No one can dispute that Death Cab could have tried harder these last few years, and their sporadic live show fully supports that, but Kintsugi has at least found its place in restoring confidence to the brightest moments of the band’s career, and that’s almost worth it. Now, about those low points…

Colin Fitzgerald writes and studies in Mt. Pleasant, MI. He's also a frequent contributor to PopMatters and Prefix Magazine, and he occasionally plays music. You can also follow him on Twitter @ColinFitzOK if you're tired of reading what famous and/or funny people have to say.