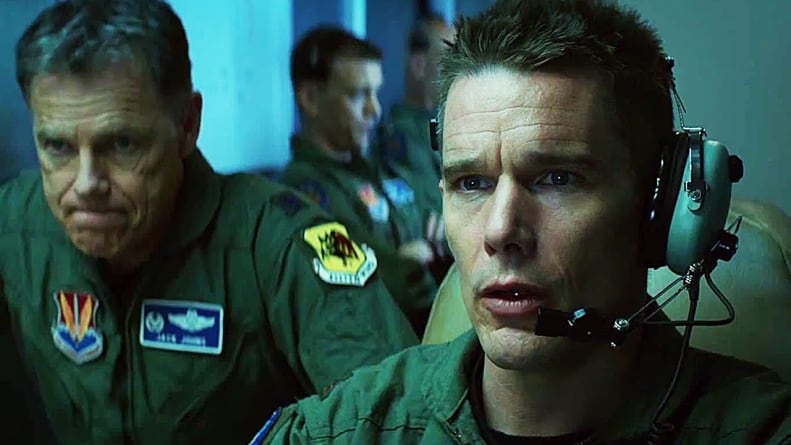 The film fails because its ethical dilemma feels fundamentally dishonest.

If there’s one thing Andrew Niccol is good at, it’s surprising openings. Good Kill begins with shots filmed through the target reticule of a gunship as it circles over a Middle Eastern town looking for combatants. Close-ups of pilots’ eyes peering through viewfinders and of their mouths calmly relating observations and attack preparations until a missile is dispatched and detonates on the plane’s target camera with eerie silence. It’s a disquieting scene made even more unsettling by its twist, the revelation that these pilots aren’t sitting in the plane but instead operate out of a barracks on U.S. soil, capable of dropping bombs on Taliban in Afghanistan and driving home for dinner.

And if there’s one thing Andrew Niccol is bad at, it’s following up the promise of his initial gimmick with anything approaching consistency or complexity. No sooner has Major Thomas Egan (Ethan Hawke) stepped out of his “cockpit” than his superior officer, Colonel Johns (Bruce Greenwood) starts talking to new recruits about the seriousness of their desk jockey destruction, even as he concedes that their controls were modeled on Xbox and the soldiers themselves were recruited at arcades. Greenwood, now long settled into the part of the gruff leader drawling out hard-assed paternalism, proves that the greatest perk commanding officers get is the lion’s share of good dialogue in military movies. Sardonic in his acknowledgment of the lack of excitement in remote warfare, Johns nonetheless evangelizes for this new post. “Drones aren’t going anywhere,” he says, laughing off the strawman objections of macho soldiers and protesting liberals alike. “In fact, they’re going everywhere.”

That’s about the general tone of the film’s tongue-in-cheek appropriation of stale War on Terror satire, which reaches its apex when Johns’ unit gets taken over by the CIA, who orders black ops strikes on non-enemy combatants and even in non-enemy nations. Niccol’s recurring tic of filming the CIA in “close-ups” of a conference phone speaker button as an invisible agent relates commands says a lot, but unfortunately the director drags down this effective setup with dialogue that feels pieced together from footage cut from various Paul Greengrass movies of the mid-2000s for being too on the nose. “No one regrets the loss of innocent lives more than we do,” the man claims even as he casually demands the pilots lob a Hellfire into a crowd of civilians to kill one relevant target. The only thing more unbearable than this are the scenes of Egan’s home life, a smorgasbord of clichés about war as a drug and the inability of some soldiers to cope with a life without immediate danger. Does January Jones play Egan’s wife and bring all her Betty Draper trapped-bird despair to the part to maximize the sense of drama? Does she ever.

Good Kill has a host of small absurdities, from Zoë Kravitz’s transparent voice of reason to Ethan Hawke’s, well, voice, pitched so low and raspy like Greenwood’s that it’s a wonder Egan doesn’t get busted for impersonating a superior officer. But above all the film fails because its ethical dilemma feels fundamentally dishonest; for all its invocation of video games as proof of how grotesque America now approaches military engagement, it largely suggests that the problem with war is that it has lost its sportsmanship. Furthermore, Niccol entirely loses the thread of his picture with its coda, which gives the title literal application in the redemption offered to Egan in the form of a righteous missile strike, a blatant contradiction that gives the ending an abhorrent sense of peace despite its carnage and sticks out as the worst, most self-negating ending in a career filled with them.