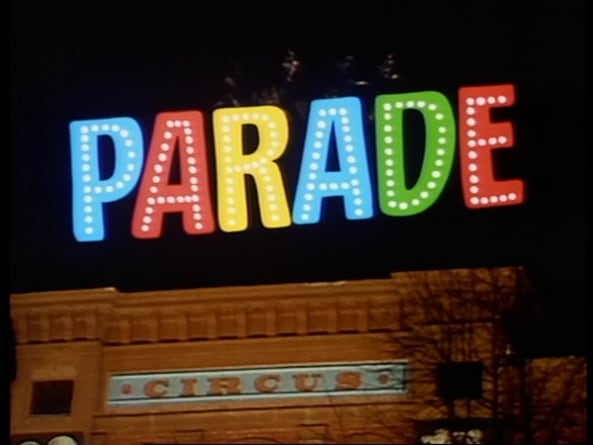 Jacques Tati provides yet another gentle reminder that anachronism always needs a place among modernity.

Parade, Jacques Tati’s final feature, is just an intimate circus act featuring performances of incredible feats and performers of incredible talent. In it, Tati uses the charming and somewhat ingenious convention of telling small stories in the circus’ background by continually coming back to audience members who never speak but whose personalities materialize as we watch them watch the show. Tati himself plays the ringleader, and the film is a loose, lo-fi (mostly shot on video, with some film mixed in) platform for his style of physical comedy, mime and dry humor.

The sharp, faux-bumbling skill of Tati’s troupe of clowns makes the film. Apparently, in the 1930s, when Tati was a professional stage performer, he specialized in silently physical imitations of sports figures (he was a former pro rugby player). While the clowns juggle and slapstick their way through impressive routines (including one where they invite audience members to try to mount a recalcitrant donkey), it’s Tati’s pantomimes of tennis and boxing that are the funniest acts in this film. 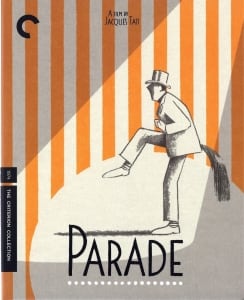 Parade is notable in Tati’s oeuvre for not being a M. Hulot film. In it, we see nothing less than Tati himself, acting… not exactly like a real person, but more like one, less like a broad character than in any of his other movies. His ringleader comes off as the only character Tati played who could be imagined existing in the real world. Which seems to be a direct result of the form Tati has chosen. Parade could be a simple concert film, complete with the look of early video (the characteristic spectral light trails), if the circus’ audience (a mix of fun-loving hippies and cherubic little girls) weren’t always suspiciously in on the jokes. Tati seems here to have connected with his audience in a way he never could using Hulot.

According to Jonathan Rosenbaum, whose 1983 Sight and Sound article, “The Death of Hulot,” eulogized both Tati and his signature character, long before he made Parade the director felt boxed in by the French public’s insistence that he play Hulot. But he wasn’t able to jettison the “holy fool” (Rosenbaum’s words) from his work until after Playtime (1967) nearly tanked his career and forced him to scale back his projects (he made one Hulot film after Playtime, but, wrote Rosenbaum, he was nearly bankrupt). After Playtime, the French appetite for Hulot waned, ironically freeing Tati creatively at the same time that he became most constrained financially. “The Death of Hulot,” a first-person narrative from a man (and great critic) who got the chance to work with Tati as the director’s career was winding sadly down, reveals him to have been an irritable, prone-to-dudgeons artist, but Parade, which was made the year after Rosenbaum first met with Tati, is a veritable defiance of all things pessimistic.

It’s unclear whether Parade was exactly the movie Tati yearned to make. By contrasting the thoroughly 1970s-looking audience, with their long hair and bell bottoms, with the proudly old world demeanor of his comedy troupe, Tati provided yet another gentle reminder that anachronism always needs a place among modernity. But was this film meant as a celebration of direct comedy and its immediate effect on audiences? Or did it simply offer a format that was an affordable outlet for Tati’s comedic sensibility? Either way, it seems true that if Tati had been able to secure a bigger budget (which might have meant another Hulot film instead of Parade), we would never have gotten to see the direct beauty of many of Parade’s sequences. What Tati lost was the cultural currency and direct identification he had achieved with Hulot, the shorthand of whose character traits allowed him to play with cinematic worlds in his unspoken way without worrying about exposition or plot. But those are traits that make his Hulot films suffer. In Parade, Tati has circumvented the entire expectation of plot, and it’s the most watchable film in his oeuvre.