Torres the rock star has arrived, but somewhere within her will always be the woman alone with a guitar, laying herself bare.

On her sophomore album’s title track, Mackenzie Scott recalls her Baptist minister in rural Georgia reassuring her that if the tax collector Zacchaeus found salvation in God she could as well. Scott dispassionately notes in the next beat, “Pastor lost his position/ Went down for pornography.” Sacred cows don’t interest the 24-year-old Brooklyn-via-Nashville performer much. Neither do creating senses of false comfort.

Over Sprinter’s nine-track, 45-minute run time, Scott’s sound and mind frame oscillates between arena and solitude, power and vulnerability. The album uses story fragments recounted in blunt language to dissect religion, family, growth and loss. Scott does not so much shed skin on Sprinter as she rips it off. Gone is the singer-songwriter motif that followed Scott’s self-titled debut as Torres, the surname of her grandfather. No longer can one imagine her songs played in front of down and out coffeeshop patrons. Sprinter announces Scott as a frontwoman whose songs employ elements of grunge and folk, in addition to synths, are designed to blast to the back of large rooms.

This violent molting sensation takes flight on opening track “Strange Hellos,” in which quiet, plucking unease explodes into “don’t fuck with me” angst on the vocals and massive guitars. “I was all for being real/ But if I don’t believe then no one will,” she sing/shouts, in essence cornering whoever or whatever had cornered her in the past. Scott’s confused and disenchanted trek through young adulthood continues on “New Skin,” on which Scott requests prayers for her deteriorating family. She may or may not believe, but as the familiar familial darkness surrounds her, she seeks the favor of a higher power. A screaming post-rock instrumental interlude stands-in for the Holy Ghost, instead. “If you do not know the darkness/ Then you are the one I fear the most,” she concludes.

The darkness, of which Scott alludes, manifests in guilt, immature lovers, the church and even one’s mind. She approaches these obstacles in different ways. On the title track she concedes “the Baptist in me chose to run.” “A Proper Polish Welcome” finds her, in gorgeous falsetto, dreaming of taking on other forms, notably the sea, and questioning the meaning of things. “Son, You Are No Island” takes an opposite route. English poet John Donne’s 1624 work Devotions upon Emergent Occasions inspired the track, but, while her distorted vocals create a water ringing in the ears sensation, her message is direct and forceful. “Son, you’re not a man, yet/ You fucked with a woman who would know,” she sings, eviscerating a past love.

Scott extends the proceedings on the album’s back-third. Two of the last three songs – “Ferris Wheel” and “The Exchange” – stretch beyond the seven-minute mark, to less than stellar results. “The Exchange,” a whispered, almost entirely a capella tale touching upon her mom’s adoption, subsequent loss of her birth documents in a flood and fear of death, feels like an ode to her past in more ways than one, albeit a meandering one without a definitive moment.

Sure, Scott the rock star has arrived, but somewhere within her will always be the woman alone with a guitar, laying herself bare. “I am afraid to see my heroes age/ I am afraid of disintegration,” she concludes on “The Exchange.” We, as individuals, spend so much time denying the inevitability of our own demise. It’s in these moments, whether quiet or loud, when Scott confronts her fears – and trudges forward – that her light and vitality are revealed in full. 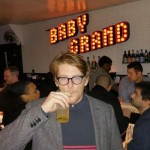 Ray Legendre is that rare breed of ginger with soul/a soul who enjoys singing along to/butchering Top 40 pop songs with falsetto vocals, dancing like Travolta in Pulp Fiction and partying with words and whiskey. You can find him on social media @cajuntomato.