Embrace your fears. Face them. Berbere is a wonderful thing! 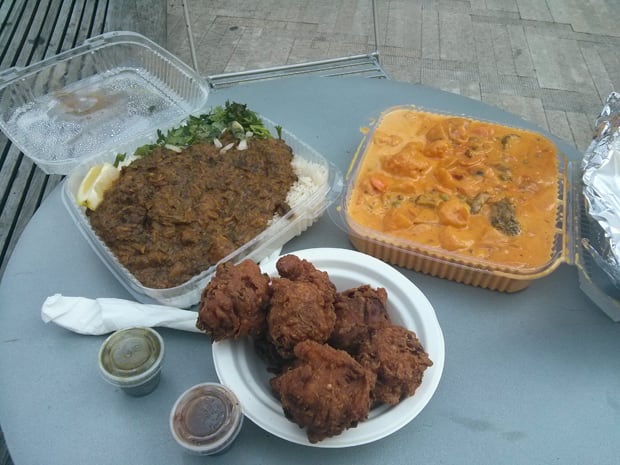 Synopsis: Solid (and we do mean solid) Indian fare with a large variety of options, from lamb to chicken to shrimp. One of the most cost-effective lunch solutions we’ve yet experienced. This place is generally legendary with a brick-and-mortar location and two carts.

We ended up with the lamb saag ($9), the navratan korma ($8), a creamy mix of vegetables over rice and the vegetable pakoras ($3). The pakoras came with their own sets of chutneys and were practically a meal unto themselves: thick, chana batter encrusted onions and potatoes into a glob of hot, crunchy goodness. We could barely get a third of the way through the other two dishes before we split it up and took the remainder home.

Time: It took us nearly 15 minutes to get the food, but it was so dense that we were done with our meal in under 45 minutes.

Value-5: Holy what. We got a combined six meals out of our $20 investment. That’s just over three bucks per sitting. You can’t beat that.

Sustainability-3: They offer Go Box, and in my opinion, skipping a meal because you ate mostly cream and vegetables with some rice is one of the better options for the environment: the fewer meals you eat, the better.

Fear Factor-3: Indian is gloppy and soupy to most. For the uneducated, it may be a bit scary. For the rest of us who’ve been exploring the multi-spiced cream sauces, the tamarind chutney, the deep-fried veggie balls, this isn’t a thing. So, that’s all up to you. The cart is fairly busy all the time, so it’s not like anything’s sitting out.

Staying Power-5: I went to school over 11 years ago, and that’s when this now-chain of carts and restaurants started out. It now has a prime location on the corner of the cart pod and is always busy. And rightfully so.

Creativity-4: Indian food in America mostly follows a script: butter chicken, saag, a couple of veggie dishes, naan. New Taste of India offers all of that and more: the pakoras we had, they have wraps that are sort of like an Indian gyro, as well as a ton of offerings in this tiny kitchen. 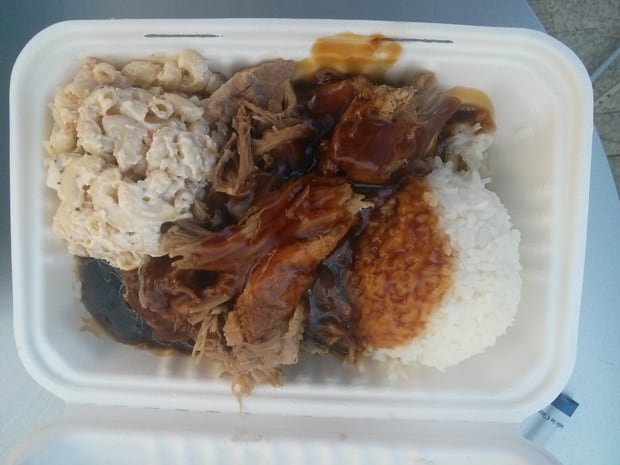 Simple offerings that are filling and delicious. For $7.50, you get your choice of meat (shoyu chicken, Kalua pork, fried chicken bites, or Loco Moco (ground beef with gravy), a large scoop of rice and mac salad. It ends up being about 20% too much food for us. We also opted in for the spam musubi, an oddly delicious nori-wrapped sushi-handroll-like snack filled with a slab of spam, topped with rice and a bit of sesame seeds on the inside. Again: oddly satisfying, and that is actually what probably put us over the edge.

Time: Our service was lightning quick; we were out of there in under three minutes. Our total meal time was well under 30 minutes, allowing us to bask in the sunlight of the warm spring noontime at the park.

Value-4: We felt this was one of the more fairly priced items in a while. There was a healthy helping of smoky pulled pork and the fried chicken was a decent size as well. The habanero-infused teriyaki and spicy mayo were complementary, as well.

Gut check at 3pm: Totally fine. May not need dinner.

Sustainability-2: The amount of garbage was fairly minimal and mostly paper. Except for the plastic tubs for sauces, most of this was compostable.

Fear Factor-4: Spam? As sushi? It’s a bit off putting, I have to admit. And plate lunches are sort of heart-attack looking. There’s a little fear here, and Hawaiian isn’t common nor super healthy. But once you get over that, you’re in for a real treat. It’s nothing like a double cheese-sandwich bun on a hamburger or anything, but it’s still a bit intimidating.

Staying Power-5: A solid deal, a solid meal, and a quick lunch make this a power player. It’s also been here a long time.

Creativity-3: These guys get an average rating here. Plate lunches and spam musubi aren’t exactly common, except in the islands. But compared to some of the other carts around, they do a good job with their awesomely creative sauces and their plate lunch combinations. All of it is done in a way that is simple and not confusing, which is an added bonus. 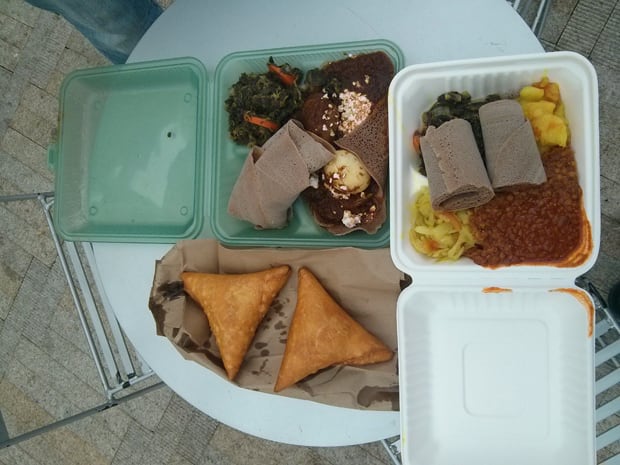 Synopsis: Eight bucks buys you a veggie special or a meat dish with one side. Each comes on some injera and comes with two pieces of injera. You eat with your hands, so you can skip the plastic forks and spoons if you want to be authentic.

We went with the classic doro wat, a reddish-brown flavorful sauce boasting a chicken leg and a hard-boiled egg, as well as the veggie special, which featured miser wat (lentils also in the berbere sauce) and all three sides: the collard greens, potato and cabbage. We opted to add in the $2 sambusas, an Ethiopian adaptation of the more familiar, but seemingly ubiquitous Indian samosa. Theirs was filled with freshly cooked lentils, was hearty in its size (“I think I could have a side and a sambusa and be good,” my dining companion quipped) and perfectly fried to a crisp perfection. I regretted my decision to go with the collard greens, as they were a little bland; the potatoes would have been a much better choice, as they had a slightly sharp sour flavor added to them.

We tend to arrive early, and were there at 11:30. We had to wait about 10 minutes before they opened up, but we were the first order of the day. Our server boxed up our order in under 5 minutes; the bulk of the time was spent frying the sambusas.

Eight bucks for just a little bit more than the two of us could eat was a fine deal. Both of us were a tad hungrier than normal. Under most circumstances, I’d have opted for more injera as it is some of my favorite stuff on the planet. But the deliciousness (and size) of the sambusa made it worth it.

I will be able to eat dinner. But it will be small.

Teff, the grain used in injera is highly sustainable, unlike wheat. It’s also, for those who it matters to, gluten free and a whole grain. Emame’s was one of the first adopters of Go Box. While they do serve beef (a poor contender in the sustainability world) and chicken (which is better), lentils, greens and cabbage are their primary offerings, which also boosts their score a bit.

I first encountered Ethiopian when I was 15, a year after I discovered Indian food. The soupy, veggie-heavy fare is a bit daunting. Combine that with eating with your hands with the injera and you’re in for a fairly exotic experience. Note, though: the fear is only for those who haven’t adjusted to this alien way of eating. Considering the cleanliness of the cart, the temperature of the food, and the freshness of everything, on my personal end, I’d give it a 1 fear-wise. But I understand that most may find it a bit odd/scary.

Embrace your fears. Face them. Berbere is a wonderful thing!

Emame’s has been here since the beginning of 2011. All the reviews I have seen have also lauded it on quality, consistency, and flavor. They’re doing everything right here, and I see no reason why they’re going to go anywhere. There are just too few Ethiopian carts to threaten their status.

I’m scoring this low because, as with almost every Ethiopian place I encounter, the menus verge on routine. The sambusa earns them a point because I haven’t seen them anywhere else. But everything else can be found on the menu of just about every Ethiopian restaurant in America. Some other restaurants have introduced fish and mushrooms into their offerings, which would earn them a couple of points. That said: I understand and appreciate the simplicity of their offerings, which keeps costs, space requirements and option-paralysis-while-at-lunch down.