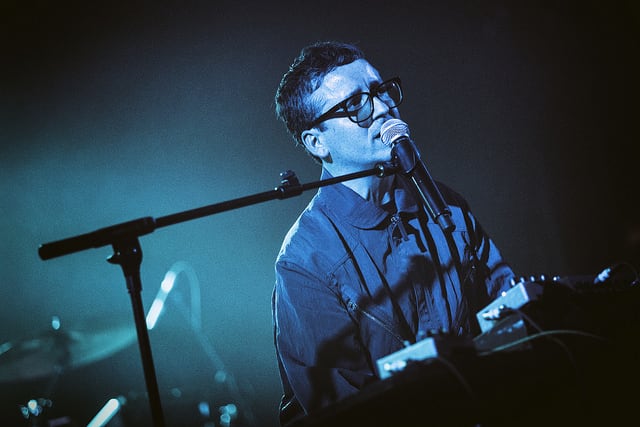 The fact that Hot Chip is still standing in 2015 is something to applaud. How many electro-pop acts have formed and fizzled out since the band’s 2002 debut? Even those who ascended to the heights of indie rock’s Mount Olympus, such as LCD Soundsystem, are now defunct. And yet, here is Hot Chip not only touring, but releasing yet another excellent album in Why Make Sense?

There is something hopelessly naïve in Hot Chip’s music, paeans to true love and sweat-soaked nights on the dance floor that never end. Electro-pop has moved away from these sweet sentiments as darker elements have tinged such music. Think Grimes and Nika Danilova of Zola Jesus, before she decided to become Christina Aguilera. You won’t catch those two singing about one life stands and hopelessly lovesick school boys. But somehow, the boys in Hot Chip pull off these endearing sentiments quite well indeed.

Still coming down from a late night set at Sasquatch the night before, some of the boys of Hot Chip took the stage wearing pajama bottoms, perhaps still sleepless after bringing the party to the Gorge the night before. Kicking off the 16 song set with new track “Huarache Nights,” Hot Chip got us up and dancing, most folks around me soaked with sweat by the end of the evening.

Hot Chip has two modes: upbeat dance numbers with beats that recall early disco and slow, sweet ballads that often celebrate love pure and true. Faster songs dominated the evening, but the band peppered in some slower moments for the lovers in the crowd. Though Hot Chip did draw a few songs from its new album, the set featured a good selection of music from throughout its discography, including crowd-pleasing favorites such as “And I Was a Boy from School” and “Ready for the Floor.”

The last time I saw Hot Chip, lead vocalist Alexis Taylor, whose syrupy voice is one of the band’s defining attributes on record, sounded less sugary in person, singing with a voice that sounded like a strained bleat. Maybe that was an off-night, because Taylor sounded great this time around. I wish keyboardist and co-vocalist Joe Goddard had more chances to show off his voice, but he got a chance to shine in the raucous closer to the first set, “I Feel Better,” a perfect pop song that could have come from Madonna’s ‘80s heyday.

New songs “Dark Night” and the “Why Make Sense?” made up half of the four song encore, the latter some of the darkest-sounding work Hot Chip has done so far. The band then closed the night with a radical re-working of Bruce Springsteen’s “Dancing the Dark,” its title perfectly summing up what Hot Chip’s music is all about. You can’t start a fire sitting ‘round crying over a broken heart. Indeed.