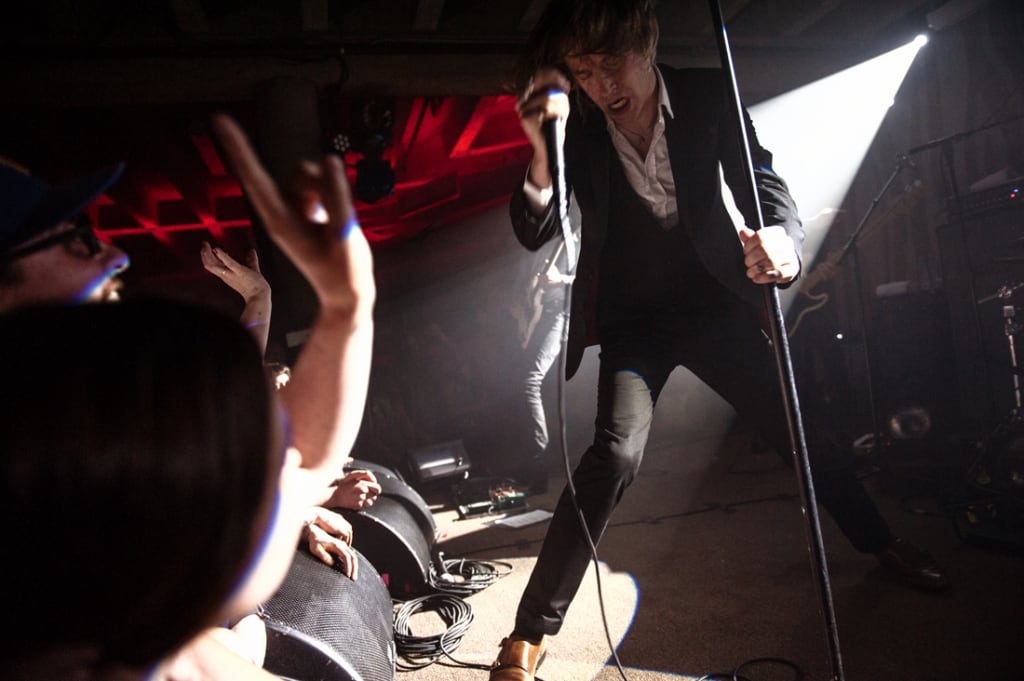 I often bemoan the lack of danger at rock shows these days, especially here in the Pacific Northwest where politeness is a virtue that is sometimes taken too far. Here, two people at opposing points at an intersection will stop traffic to gently argue about letting the other person go first rather than succumb to any form of road rage. Sometimes shows that are meant to be raucous end up feeling de-fanged, all elements of suspense, and even a little peril, completely lost in a culture of civility. And even though the crowd went wild at Refused’s show at the Doug Fir Lounge last week, just enough courtesy prevailed for a mosh pit that felt safe, yet within the spirit of the music made by these Swedish punk legends.

“Say goodbye to your pretty little 300 person capacity club,” someone posted on some site somewhere when it was announced that Refused would be coming to town, eschewing the nearly 1,500 limit room over at the Roseland Theater (where they played back in 2012), for the smaller, more intimate Doug Fir, a show that sold out almost instantly. The men of Refused may have a new album called Freedom waiting in the wings, but they must know that we were there to hear classic cuts from their 1998 masterpiece, The Shape of Punk to Come. But unlike some bands that just want to play the new stuff, Refused rewarded us with a set that clocked in around an hour and featured a good deal of material from The Shape of Punk.

Refused’s aspirations for a good show live and die with frontman Dennis Lyxzén. Lanky and long, Lyxzén still puts everything into the show, screaming, balancing on his head and even propelling himself into the crowd. This is a band that couldn’t find a foothold in the United States back in the ‘90s and suddenly finds itself the creator of an album that, to some, is as innovative and important as OK Computer, released just a year before Refused’s masterwork.

The 42-year-old Lyxzén, who thanked us often for coming out and supporting Refused at its smallest show in years, moved like he hasn’t aged a bit since The Shape of Punk to Come’s release. He swung the microphone like Iggy Pop; he danced like Nick Cave on fire and he was not above kicking his legs at the appropriate punctuated moment or drum riff. He made the crowd of mostly 30-year-old dudes get over sore backs and exhaustion from the work week and made us rock the fuck out. I even hurled myself at the back of some guy in the pit during “New Noise.” He turned around and glared at me.

When hailing the intimacy of the Doug Fir, Lyxzén said something about there being no barriers and how we all were bathed in the same sweat. And despite the pushing and roiling mosh pit, everyone just seemed so glad to be there, so glad to push and be pushed and fall backwards and catch the dude jumping from the stage and being sprayed with Lyxzén’s sweat and dancing to Refused’s monster riffs and reveling in that feeling that is so elusive at a concert these days: that feeling that we’re all okay, we’re all in this together, there is something bigger and we’re part of it. That’s rare, but there it was.