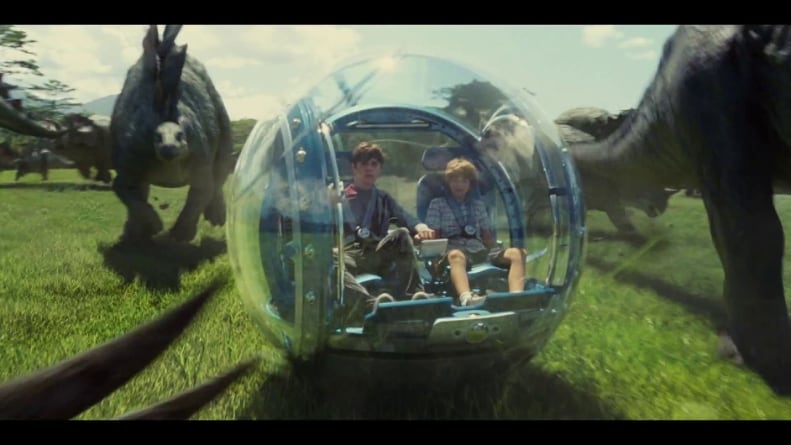 Put this franchise back in amber and throw away the key.

So far this summer, the scoreboard reads Aussie post-apocalypse one, dinosaurs zero as Jurassic World arrives DOA at your local cinema this weekend. The first Jurassic film since 2001, this franchise would have been better served remaining extinct rather than polluting the multiplexes with yet another loud, stupid and completely boring movie. Of course, the second and third installments already felt tired, meaning the good people at Universal Pictures would need to come up with a way to make Jurassic World bigger, badder and better than the lifeless sequels that led the franchise to its demise 14 years ago.

First step: choose a young, hot director who had a modest hit with a well-regarded indie film. It worked with Gareth Edwards, who was handpicked after the moderately successful cheapie Monsters to helm the Godzilla reboot last year, steering that monster to a domestic gross of more than $200 million. So for Jurassic World, the studio godheads tapped Colin Trevorrow, whose 2012 film, Safety Not Guaranteed, earned rave reviews for its quirky time travel premise. Unfortunately, it also kind of sucked and as Trevorrow makes the leap to the big time, he has made a movie completely devoid of the folksy charm of his prior one, probably completely overrun by the suits more concerned about making Jurassic World just vanilla enough to please everyone.

Next, bring in a hot, young star. After his star-making performance in Guardians of the Galaxy, Chris Pratt is poised to become this generation’s Harrison Ford. Too bad his character here, an ex-military employee at the new Jurassic World park tasked with training its velociraptors, is written to prevent Pratt from playing up to the charm that made his Peter Quill such a hit. Here, he simply glowers, runs from dinosaurs and pushes the film’s more helpless characters behind him as they slowly back away from the CGI creatures.

So now we have the hot new director who can’t really flex his indie muscles and the hot new star who is given a dead-end role. Now what? The big premise in Jurassic World aptly sums up what is exactly wrong with the film, actually. As Brontosauruses and T. rexes grow passé, the people behind Jurassic World are constantly looking for new ways to reinvigorate the park and prevent attendance from falling. You can’t simply repackage the same slop over and over. Sound familiar? So, to keep the tourists coming, the park’s scientists splice DNA from one creature with the DNA from another to create brand new dinosaurs. That is until one of their creations gets loose and starts murdering people.

There you have it, the old dinosaurs that filled us with wonder back when the first Jurassic Park came out in the ‘90s just aren’t cool anymore. That’s a pretty bad sell for a film predicated on its ability to inspire awe, wonder and terror. Hey guys, these old dinosaurs ain’t shit anymore, so we have this fucking dinosaur to compensate. Good thinking. You know what else sucks? For a park established on millions and millions of dollars in investments, why do all of its telecommunications crap out at precisely the wrong time? If you have a park filled with dinosaurs and a bunch of kids looking at them, you don’t really want any dead zones, do you?

Pair all this with a leaden script (including a scene where a dying dinosaur meant for tears can only inspire laughs), and you have one lifeless film on your hands. George Miller already staked out the summer’s best movie in Mad Max: Fury Road, throwing down the gauntlet for all the other blockbusters to come. Jurassic World doesn’t even come close. Put this franchise back in amber and throw away the key.